Loss of Falcon-9 Launch to ISS

The Sunday morning launch of a Falcon-9 / Dragon spacecraft supply mission to the ISS ended abruptly in an explosion a couple of minutes after launch.  My condolences to Spacex over this,  and may God speed their efforts to find out what caused this,  and to fix it.

The ISS crew has sufficient supplies through to October.  After that,  they would be forced to abandon and come home in the emergency Soyuz craft docked to the station.  Somebody has to be flying and make a successful trip by then.   We really do need all three outfits up-and-flying.

If I were them,  I'd be looking real hard at propellant leaks in the second stage.  Early at lower altitude I saw signs of propellant flash-burning erratically alongside the rear end of the first stage.  Then I saw flashes of white "cloud" moving down the side of the vehicle coming from the interstage.

The higher the altitude and thinner the air,  the more of this leaking "something" I saw.  When the explosion occurred,  I saw "for sure" in the video that the first stage was still intact with all engines firing,  for a finite amount of time.  It was the second stage that exploded first.

That suggests to me that something reactive was leaking from the second stage into the interstage volume around that engine.  You need that protected space to have a fume buildup that can be ignited.  They were approaching the staging point,  and systems were firing up electrically to make that happen.  Electricity and loose propellants are an explosive combination.

It couldn't have been just kerosene,  there's almost no air up there with which it could burn. You can see that by the first stage rocket plumes ballooning out in the nearly-zero backpressure.

It had to be both kerosene and liquid oxygen that were leaking!  Holes in both tanks cannot be ruled out,  but that seems most unlikely.  Especially as there is no internal path to get leakage from the forward tank into that interstage.

I'd be looking very,  very seriously at the propellant line stop valves to the turbopumps (or even the engine chamber itself) that might have opened prematurely somehow.

Elon Musk recently said the best of their thinking is that a strut internal to the second stage LOX tank failed,  releasing a container of helium pressurant,  which leaked,  causing the tank to overpressurize and burst within seconds.  His message said they use lots of these internal struts.  This one seems to have failed at 5 times lower force that it is rated to carry,  according to Musk.

They'll have to figure that one out,  for sure.   If the failure of one small part can be catastrophic,  then some sort of redundancy seems to be called for.  At least somebody should be looking at that issue.

The other issue is what they (Spacex) seem to be focused upon:  how to prevent installation of  low-strength parts.  This is very important:  the environment is extreme.  LOX is very cold,  a temperature at which all materials behave in a brittle fashion.  Plus,  rocket vehicles inherently suffer vibration.  Vibration + brittleness is a recipe for bad outcomes in flight vehicles.

News item posted today indicates "two months away from launch",  and "taking longer than envisioned".  They have decided to err on the side of caution.  The news release still mentions the failed strut,  but gives no further details.

From that I conclude that they know "for sure" it was a bad strut as described above,  but they are not yet sure they can prevent it from happening again.

News stories indicate that Falcon-9 returns to flight in early December (this year).  Apparently they have resolved whatever went wrong with the internal strut.  I find no news releases about this on their website.  I hope they have this fully and completely resolved,  and wish them well with the upcoming launch and first stage recovery attempt.

Spacex has just returned Falcon-9 to flight status with a successful orbital launch of some 11 small satellites.  In this same mission,  they also for the first time successfully landed and recovered its booster rocket first stage.  That is an amazing recovery.  Kudos to Spacex.

Update 10-5-19:  I have noticed in recent days a very strong upsurge in readership of this particular article,  although I am unsure who those readers are.  I am an old retired aerospace engineer.  If you have questions,  feel free to contact me.

Update 11-8-15:  I am surprised that this article has not drawn more readership and comment than it has.  This topic does really kill people.

Initial article:  I first wrote this little commentary in July 2006,  in response to questions from friends and colleagues,  regarding the Airbus crash in NYC,  where the vertical fin came off under hard rudder application during climb-out from takeoff.  I used to send it by email as a small file.

This topic of properly joining composite structures to metal (or to other composite structures) with fasteners,  just keeps coming up,  again and again.  I have noticed that a lot of outfits still fail to do this job properly.  So,  I thought I would put this article up for interested persons to use.  Knowing the truth might save a life.


Here is how we used to build composite rocket motor cases with pinned closures at the old McGregor rocket plant (see Figure 1,  where the "shims" are thin sheet steel stock).  Weight was at a premium,  as was reliability.  We used these for up to 5-inch diameter motors up to 4000 psi maximum expected operating pressure with wall thicknesses away from the joint under 0.10 inch.  We even used these externally un-insulated in situations with Mach 5 aero-heating by friction.  (Typically,  these had around 0.1 inches of rubber insulation on the inside to hold the 5000-6000 F fire away from the carbon-epoxy that degraded at about 300 F.)  None of our pinned joints ever failed. 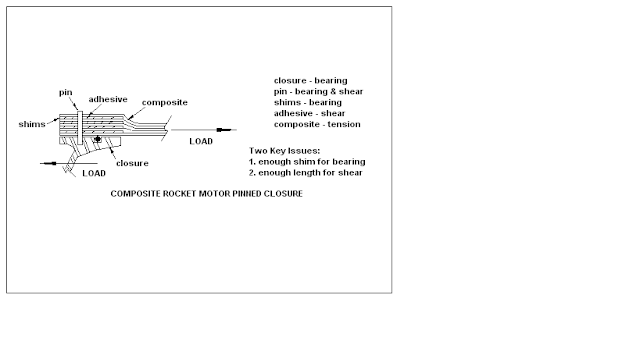 This (Figure 2) is typical of general industry practice joining composite (or plastic) to metal.  This concept has long been used in automotive and consumer products,  because it is cheap.  It has also long been known to be very failure-prone.  The idea is to try to spread the loads for lower stresses with a big washer,  but it never really works that way.  It always starts at a single point on each washer,  unzips around it,  then unzips from washer to washer. 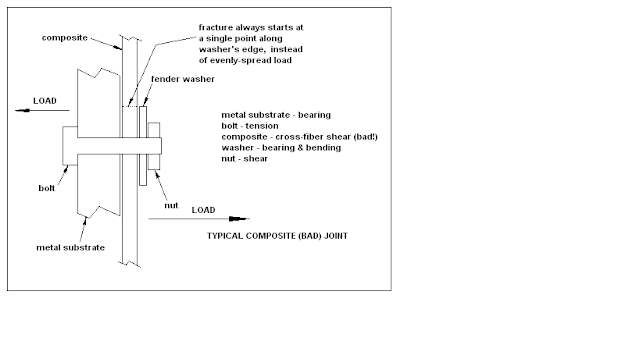 The recent (as of 2006) fatal crash in NYC of an Airbus airliner operated by American Airlines,  with a composite vertical fin,  points out the need to do this joint correctly.  It is necessary that there be some sort of metal attachment fittings for a bolted joint.  These fittings would be “glassed-in” or otherwise made part of the composite fin structure.

Such reports as are given to the public do not indicate exactly how this was done in the Airbus design.  That design must lie somewhere between the extremes (“good” vs “bad”) pictured above.

However,  reports do indicate that these attachment fittings tore out of the composite fin structure,  and were found still bolted securely to the fuselage,  sans fin.  Reports also indicate that one of the pilots applied full rudder deflection to correct an upset at low altitude climb-out conditions.

The ability to use rudder,  aileron,  or elevator controls at full deflection,  anywhere in the flight envelope,  without fear of losing tail surfaces,  has been taken for granted in American aircraft design practice since the early days of commercial travel.  (This stricture does not apply to wings,  of course.)

Reports since the crash tell of a dispute between Airbus,  American Airlines,  and the pilots’ union over who was supposed to tell the pilots they could not use full rudder deflection during climb-out,  and whether or not they were even told at all by anyone.  This is proof of the foreign design not meeting generally accepted expectations.  It thus may not strictly meet FAR Part 25,  either:  a reciprocity issue needing swift resolution.

The right way to attach a composite fin to a metal fuselage is pictured below (Figure 3).  This is an adaptation of the well-proven layered interface used in the rocket motor pinned closure joint.  The key criteria are (1) provide adequate adhesive shear area to spread the tensile (and compressive and shear) loads into the composite structure by shear,  and (2) size the members and the adhesive bond areas to take full deflection forces everywhere in the expected flight envelope,  and a little beyond it,   for safety. 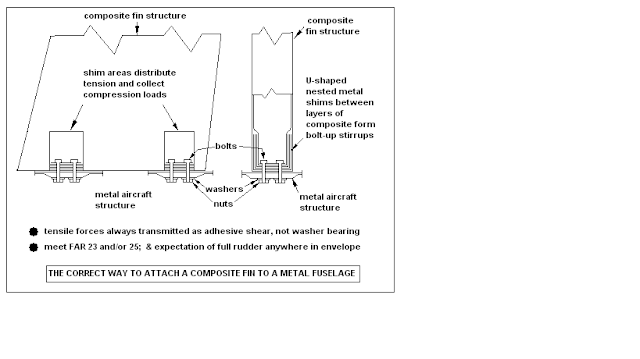 Figure 3 - Correct Way to Join Composite Structure to Other Structure with Fasteners
Posted by Gary Johnson at 12:16 PM No comments: