Bear in mind that Starship is Spacex’s new name for what was once the BFS second stage spacecraft article of its BFR/BFS system.  To be useful at Mars or the moon,  this spacecraft must be able to make rough-field landings.  Its mass is heaviest when fueled for launch.  Initially,  it must be refueled for use at Mars,  and eventually,  also the moon.  These static loads are larger than the landing weights,  even factored for dynamical impact.

There are two parts to this:  (1) tip-over on rough or sloping surfaces,  and (2) not exceeding the bearing load capability of the natural surfaces.  There is also a new idea presented here for creating very large landing pad surfaces that fold so as not obstruct airflow,  in a very practical way.

The tip-over problem was well-explored in another article on this site,  as part of updates to the basic performance evaluation article.  That article was “Reverse-Engineering the 2017 Version of the Spacex BFR” dated April 17,  2018.  The same article identified soil bearing strengths as likely inadequate to support the spacecraft when refueled for launch.

The related article “Relevant Data for the 2018 BFS Second Stage” dated September 24,  2018,  included among other things a way to reconfigure the round tip-mounted landing pads into oblong pads of increased area.  Those results were still inadequate for the loose fine sand-like surfaces of much of Mars.

What is analyzed here is a different landing pad idea,  depicted in Figure 1 (all figures at end of article).  Essentially,  panels resembling landing gear bay doors are built into each side of each fin tip,  with hinge lines at the aft trailing edge (which is the touchdown surface otherwise). Unfolded hydraulically,  these panels become very large landing pad surfaces.  Folded,  they do not protrude into the ascent or descent airstreams at all.

The same figure shows an 1100 metric ton fueled mass,  which really could be as large as 1300-something tons.  However,  the BFS weight statement is still not known publicly with any certainty.  This figure is in the same ballpark,  given all the other uncertainties.

Assuming 1100 metric tons of mass,  the weights on Earth,  moon,  and Mars are given in the figure.  The bearing pressures associated with those weights are also shown,  assuming 2 m by 2 m parallelogram-shaped folding panels are used.  This assumes 2 panels per fin,  and 3 fins.  Just that initial assumption provides some 10 times the bearing area as the roughly 1 m diameter round tip pads shown in the Spacex illustrations of this vehicle.

Figure 2 presents safe load-bearing strengths for civil engineering purposes of various types of Earthly surfaces.  These came from an older-vintage Marks’ Mechanical Engineer’s Handbook.  No such reference yet exists for lunar or Martian soils.  However,  experiences from the Apollo missions verify that the lunar regolith is similar to fine,  loose Earthly sand.

Experiences with the various Mars landers and rovers suggest that much of Mars is similar to lunar regolith and to Earthly fine,  loose sand.  Some of Mars seems to have a mix of sand,  gravel and larger rocks,  perhaps similar to Earthly surfaces such as loose beds of medium and coarse sand,  or perhaps even as substantial as beds of coarse sand with gravel.  These require picking,  not a spade,  to remove.    A hard clay requiring picking would also be of similar bearing strength.

All of this is indicated in Figure 2.

Figure 3 compares applied bearing loads to soil strengths for the moon,  Mars,  and Earth.  The moon is the least demanding problem because of its lowest gravity.  A design adequate for the moon is adequate only for some of Mars:  the indicated folding-panel parallelogram dimensions would be 2.2 m by 2.2 m,  for about 29 sq. m bearing area.  On Earth,  sites must be strong,  well-packed sand/gravel or hard clay.  No beaches,  no sand dunes,  no soft desert.

If we increase that pad area to be capable all over Mars,  the folding panel parallelogram dimensions become 2.67 m b 2.67 m,  for about 43 sq.m bearing area.  This is part of the comparative pad area summary and comparison given in Figure 4.  There is a trade-off here:  the bigger these folding panels can be,  the more of Mars (that is otherwise fairly smooth and level) is a feasible landing and takeoff site.  The moon is not a problem,  nor is much of dry land Earth (most anything requiring picking or blasting would be adequate).

This would simply not be the case with those 1 m diameter round tip-mounted landing pads that Spacex illustrates.  That total pad area is about 2.4 sq.m,  give or take a small amount.  What is needed for rough-field capability on Mars (or the Earth) apparently falls in the 30-45 sq.m range.  You simply cannot do that,  in any practical way,  with smallish fixed-geometry tip-mounted landing pads.  Those will require thick reinforced-concrete landing fields,  or else thick solid rock.

I know they have their hands full at Spacex trying to make this vehicle a reality.  But some of the thinking I have explored here,  also needs to go into Spacex’s designs! 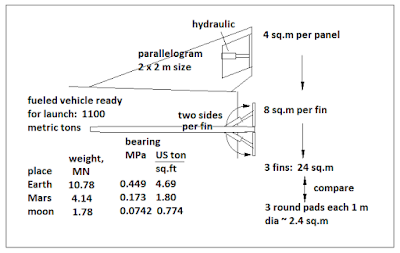 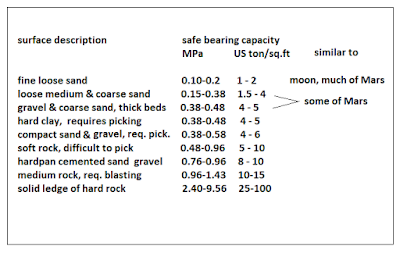 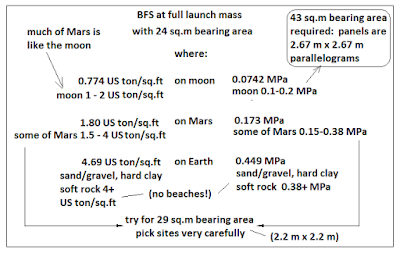 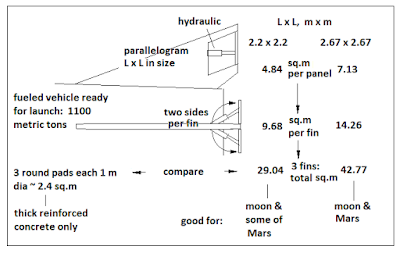 As a follow-up,  I put some more-traceable masses for the BFS/”Starship” weight statements into a spreadsheet,  with gravity data,  and empirical data for the safe bearing capability of various Earthly surfaces.  This included the selections (and rationales) as for which surfaces resemble the moon and Mars,  and which might be the widespread worst cases for emergency landings on Earth.  Sources are indicated.

Masses and gravity are given in Figure A below (all figures at end of this update). The residual propellant remaining is nothing but a wild guess,  knowing that a dry-tanks landing is truly risky.  As it turns out,  the presence or absence of residual propellant mass at touchdown does not drive the sizing of landing pad area.  Refilled launch weight drives this.

The safe surface bearing-pressure capability data for a variety of Earthly surfaces is given in Figure B.  These are civil engineering data from an old-vintage Marks’ Mechanical Engineer’s Handbook.  These surfaces are rather variable in properties,  as is typical of geology.  They represent safe bearing pressure loads so that your structure or object does not try to sink slowly into the surface,  even over long periods of time.  It is conservative,  ethical practice to use the min pressure values for design.  In the handbook,  the table presented both metric and US customary values,  for which it was obvious the metric were converted from the US customary source values.

To this table I have added the notations about which surfaces resemble the bulk of the moon and Mars,  and the rationales for those selections.  I have also indicated the most common soft-surface emergency landing surfaces for Earth,  excluding soft sand beaches and deserts (and swamps).  The rationale for that is simple experience.  These are my best estimates,  if I had to do this.

I worked out local-weight weight statements for Earth,  Mars,  and the moon,  for two configurations.  One is arrival,  with the larger payload sent from Earth,  and only residual propellant left at touchdown.  The other is at departure,  with full propellant load,  but a reduced payload,  for the return to Earth.  This reflects exactly what Spacex says the scenarios are for Mars.

Spacex says there needs to be no lunar refilling for return to the Earth from the moon,  but this analysis anticipates that eventually lunar refilling might be attempted,  for trips from the moon to destinations other than Earth.  It does not matter;  as it turns out,  the lunar launch case does not determine the design requirement for landing pad area.  But I had to check,  as a due diligence item.

What I found was that local-weight launch weights exceeded local-weight touchdown weights by roughly a factor of 5.  Therefore,  it is only local launch weights that govern max bearing pressure exerted upon the local surfaces.  One of these is the worst case that drives the design requirements.

Surfaces on the moon,  and the great majority of Mars,  resemble soft fine sand.  There are places on Mars with somewhat-stronger surfaces,  but these are definitely not the majority of possible landing sites.  You do not want a rough-field landing design restricted to rare site opportunities.  That would be rather pointless.  As for the range of properties,  you have to select the min capability.

Figure C combines the local-weight weight statements with the appropriate selected surface bearing capabilities,  to produce min total landing pad areas for Earth,  Mars,  and the moon.  Mars governs,  and by a significant margin.  The total pad area result obtained here is not at all far from the seat-of-the-pants 43 sq.m in the original article just above.  But this updated result is more traceable,  and therefore the more reliable value.  It is just about 46.2 sq.m.

The same figure also gives a selection of parallelogram dimensions for each fold-out landing pad panel.  This is a function of the number of landing-leg fins,  the number of panels per fin,  and the aspect ratio of those panels (the height to base ratio for the parallelogram shape).  Beyond scope here is the structural design of such panels;  it seems likely that the lightest version would be nearer aspect ratio 1.  That would be a panel 2.77 x 2.77 m size,  vs 2.67 x 2.67 in the original article.  That’s pretty close!

Again,  I must point out that this is the sort of design,  and design analysis,  that is needed by Spacex to really provide a rough-field capability for its BFS/”Starship” spacecraft on Mars (or anywhere else).  The round tip pads Spacex currently shows are roughly a meter diameter,  for a total of about 2.4 sq.m total area,  roughly some factor 20 smaller than what I determined here.

Without the large total landing pad area I found,  the craft is restricted to very thick reinforced concrete landing pads,  or smooth,  level stretches of thick,  solid rock.  Otherwise,  while you might possibly land (and no guarantees about that!),  you’ll sink-in unevenly,  and tip-over “for sure”,  upon refilling propellant for launch.

At 2.4 sq.m and Mars launch weight,  the applied bearing pressure is ~0.39 MPa,  similar to the 0.38 MPa min capability of Earthly coarse sand & gravel,  and similar to only a minority of Mars!  And even that still lacks the factor 2 margin you need for the dynamical impact effects of the touchdown:  the fin tips will inevitably stab deeply into the surface,  risking getting stuck like tent stakes.  Very likely,  they will stab-in unevenly,  risking a tip-over,  even if the site is level.  So the chances of a successful landing with the depicted design are very poor,  and there is no chance at all of a successful refilled launch.

If the site actually resembles the soft sand that is the bulk of Mars,  there is no chance at all of a successful landing,  and by far.  The applied bearing load is 0.39 MPa,  even without the factor 2 for the dynamics.  The soft sand capability is only 0.1 MPa.  That’s about factor 4 outside-of-the-ballpark,  and about factor 8 wrong with dynamics allowed-for!  That’s a crash,  period.  That’s exactly what will happen with three 1-meter-diameter fixed-geometry fin-tip landing pads!

Something about the design Spacex currently shows,  must change substantially,  before even an unmanned cargo ship flies to Mars.  They need 47 sq.m of pad area,  not 2.4 sq.m.  That’s what the best-available data actually says. 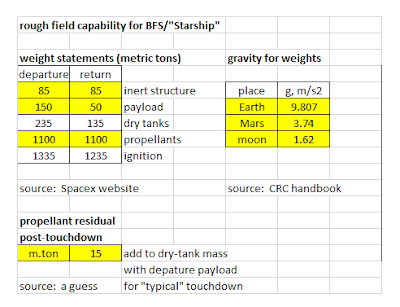 Figure B – Surface Bearing Capabilities on Earth,  Annotated for Mars and the Moon