I took a look around on the internet, visiting various company and industry watchdog sites, looking for payloads deliverable to low earth orbit (LEO), and the launch costs associated with them. I found pretty good payload information. Launch costs are little more speculative, especially as some of the data was not quite current.

I looked up some pretty reliable data for the Spacex family of Falcon rockets. Falcon 1 and Falcon-9 are already flying, and the cost data were available directly on the Spacex site. Falcon-Heavy is supposed to fly for the first time this year.

I found some pretty reliable payload data for a few members of ULA's Atlas-5 family. That's now a joint venture of Boeing and Lockheed Martin. The Atlas family was formerly operated by Lockheed Martin. The cost data came from a watchdog site, but I think it is fairly current. I have data for the -401, -551, and -HLV configurations.

I also found some payload data for a few Delta 4 configurations on the same ULA site. Delta is a Boeing operation, built in ULA facilities. I found cost data for only Delta-4 Heavy on a watchdog site, but it's about 5 years old. So, if anything, today's launch costs for Delta-4 Heavy would be higher still.

I processed these data as payload mass delivered from Canaveral to LEO, and as US dollars per unit mass of payload (payload mass divided by launch cost). The results are plotted here in metric units ($/kg vs metric tons) and in US customary units ($/lb vs US tons). I expected to see the "scale effect" operating (lower cost per mass at higher masses), and I did.

But, there are differences among the vendors. Remember, when assembling something large in LEO, it is the cost per unit mass that determines your overall project launch costs. Once the Spacex Falcon-Heavy is flying, it will be very hard to beat, in terms of unit cost and absolute payload tonnage. Judge for yourself ---- 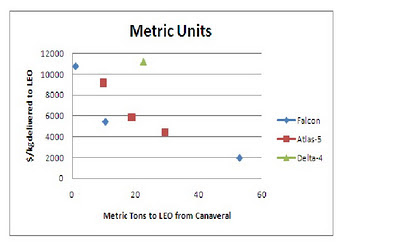 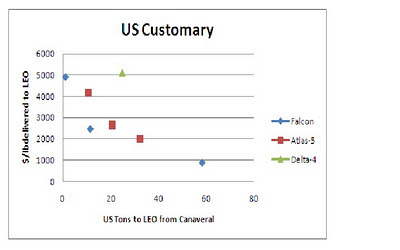 Posted by Gary Johnson at 8:40 PM No comments:

On Somali Pirates: "I Told You So"

From an article by Neal Ungerleider, on MSNBC.msn.com, 2 January 2012

“Commercial shipping is one of the most cutthroat industries in the world, and shipowners don't have the budgets to spend on space-age defenses. The recent drop-off in piracy has been due to the increased use of armed guards, not technological innovation, which in turn have been made economically feasible by skyrocketing ransoms and lengthening captivity periods. One insurance company issued a stat a few months back that 80 percent of pirate attacks were being repelled by armed guards, and no vessel employing them has been hijacked.”

This was the first, best recommendation that I made, of three, nearly 3 years ago on 4-11-09, on this site, in an article titled “3 Solutions to the Somali Pirate Problem”.
Posted by Gary Johnson at 2:43 PM No comments: