This would be a “he said – she said” dispute fundamentally unresolvable on the face of it,  except for some surveillance photos taken of the incident.  The most telling such is reproduced here.  Under the international rules of the road at sea,  a ship being overtaken has the right of way,  so the overtaking vessel has the obligation to avoid. 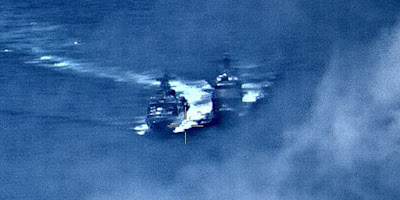 If you look at the ship’s wakes in the photo,  you can see what actually happened.  The ship on the left is the Russian destroyer,  the ship on the right with the obvious flat-face superstructure is the American guided missile cruiser.  Follow the cruiser’s wake back:  it is straight.  The Americans never changed course.  And they were indeed overtaken by the faster-moving Russian destroyer,  as the videos of the incident show,  plus its larger wake in this photo despite being similar in size.

Now follow the Russian destroyer’s wake back:  it is not straight.  The Russians clearly changed course toward the cruiser,  then adjusted back parallel at a dangerously-close separation.  In other words,  they made a rule-violating and very dangerous run on the Americans,  to try to intimidate them.  The Russian account of this incident is quite clearly a disgusting lie.

This is bullying behavior most probably done at the explicit direction of the dictator in charge of Russia:  Vladimir Putin.  He has a long and sordid history of this.  The previous-latest incident was Russian jets intercepting a US patrol plane over international waters,  and flying dangerously close while doing this.

Bullies typically continue their intimidating behavior until they meet actual resistance,  or until they get bored and go looking elsewhere for new victims to intimidate.  Merely ducking out of the way is not actual resistance.  The one bullied must fight back at one level or another.  Some bullies require higher force levels of resistance than others,  but that is just the way it is.

I suggest that the US Navy has to do more than just maneuver its ships to avoid the collisions,  when the Russians try to intimidate them.  Before the ships get too close,  I recommend putting a shot across the bow of the offending vessel.  Be prepared to back that up with actual conflict,  but I suspect that would not be necessary.

The bigger the caliber of the gun for this resistance,  the more effective it will be.  A hundred years of prior experience says that 5-inch is adequate on a destroyer,  8-inch would be better on a cruiser.  Resisting bullying intimidation is a compelling reason for US warships to have multiple large-caliber guns on their decks.  Too many do not.

The analog of this type of resistance for aircraft encounters applies to both US Naval and US Air Force aviation.  When the Russians show intimidating behavior toward patrol aircraft,  it would be wise to send a couple of escorting fighters,  just not right alongside the patrol plane.  They should be out of sight,  but able to close within a single handful of minutes,  once the intercepting Russian fighter gets detected inbound.

When the intercepting Russian fighter gets too close,  the American fighters suddenly arrive.  It’s not just getting between the Russian and the patrol plane,  resistance means firing some tracers from gun-equipped fighters,  as very-visible warning shots.  While the escort must be prepared for actual air-to-air combat,  that seems unlikely,  once the warning shots are seen.

This does mean the escorting fighters you send must be equipped with air-to-air dogfight guns,  and the bigger the better,  up to about 20 mm caliber.  This is exactly why combat aircraft equipped only with missiles are utter nonsense.  This is a lesson already learned in Vietnam,  and seemingly forgotten again in our latest fighter designs.

Show determined resistance,  and the bully will usually back down without a fight,  or at least not much of one.  That lesson applies to the schoolyard,  and to international affairs,  because nation states behave toward each other pretty much like grade school-age children.  Not just the Russians,  but also the Chinese,  the North Koreans,  and the Iranians have been displaying significant bullying behaviors of late.

It is not just our presence,  but our actual resistance,  that is the effective deterrent for this.

Similarities and differences between the two ships:

Both measures point to a larger wake created by the larger disturbance of the Chancellorsville,  if both ships were moving at the same speed.  For the Admiral Vinogradov to be producing the bigger wake conclusively means it was traveling much faster.  That clearly points to it overtaking the Chancellorsville.

Otherwise,  in general dimension,  the ships are rather comparable,  and comparable in terms of gun armament.  Both pack a large quantity and variety of missiles,  not listed in the data above.

“Fighter aircraft with guns” question.  Answer:  500+ rounds of 20+ mm required,  based on history.  Something like 1000+ rounds is desired.  The following data explain why. This list is representative,  not comprehensive.  So don’t be upset if I left out your favorite airplane.

F-22: USAF top fighter.  No guns at all!  Some combat Middle East,  mostly in bombing role.

F-4:  Retired USAF/USN/USMC interceptor,  fighter,  and fighter/bomber.  Early models A-D had no guns at all,  F-4E had an internal Vulcan 61 20 mm gatling gun with 640 rounds;  earlier models were retrofitted with gun pods carrying the same weapon.  (no longer in service)  combat in Vietnam which showed the need for guns.

If you look at the long-retired aircraft (F-86,  F-8,  F-100,  and F-4),  you can easily see the mistake made introducing the F-4 without guns.  It had to be retrofitted with a pod-mounted gun in Vietnam to cope with the Migs,  until the advent of the F-4E model.

The net result is that the air force has only the F-15 (approaching retirement) as an effective potential escort for patrol planes menaced by Russian fighters approaching dangerously close.  To reach practical escort range,  it would have to carry more drop tanks of fuel than missiles.  Neither the F-22 nor the F-35 can do this job,  and the small F-16 (also headed for retirement) just won’t have the range,  even with drop tanks.

The navy has the FA-18 capable of doing the escort job,  but only when carrying more drop tanks of fuel than missiles.  Naval fighters typically have shorter range than air force fighters.

Net outcome:  we are not equipped with the long-range escort fighters able to do the job of resisting the “bullying” of our patrol aircraft.  They will have to self-resist,  and none is equipped to do that.  They carry no guns or missiles,  being converted airliners.  (The P-3 Orion is a converted Lockheed Electra-2 4-engine turboprop airliner  from the early 1950’s,  the P-8 Poseidon is a converted Boeing 737 2-engine jet airliner from the late 1960’s.)

Posted by Gary Johnson at 10:40 AM No comments: