This came in an email forward from a friend.  It was part of a story about an advertising slogan contest decades ago,  the truth of which I do not know.

All I know is that this is what truth-in-advertising should really look like: 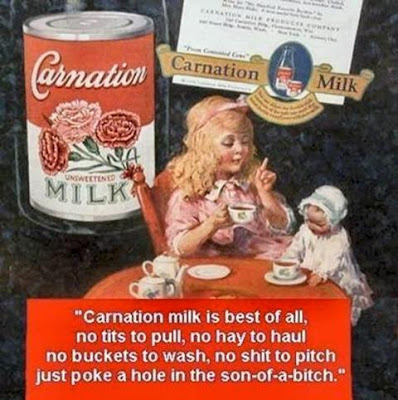 Posted by Gary Johnson at 10:53 AM No comments:

This is hilarious.  If you know what "sailboat fuel" really is. 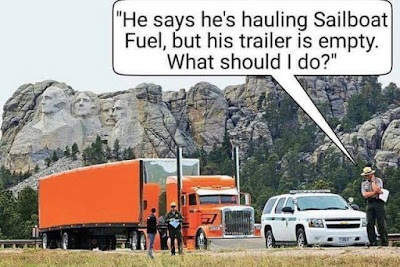 If you don't,  I'm talking about a simple sailboat with no auxiliary engine.

Posted by Gary Johnson at 6:34 PM No comments:

A search on the internet for the effects of microgravity (weightlessness) upon the human body reveals the following effects known so far:

1.       Bone decalcification (associated with kidney stones and gallstones)
2.       Muscle atrophy (seems to be reversible)
3.       Weakened heart
4.       Lengthened spine (unknown risk of recompression)
5.       Redistribution of blood and fluids (seems reversible)
6.       Effects upon vision due to redistributed fluid pressures on eyeball (may or may not be reversible – unknown)
7.       Some sort of effect on the immune system that is not understood

This list is very probably incomplete.  A very few astronauts and cosmonauts have been in space weightless for a year (most missions on the ISS are about 6 months long,  but there is one cosmonaut who spent 437 days in space).  A Mars mission is very likely 2.5 to 3 years long.  We don’t know all the answers yet,  but we know enough to worry that a Mars mission spent weightless (or in low gravity while there) would very likely kill or permanently-injure a crew.

However,  there is one way to avoid this danger entirely,  and yet still go to Mars and the other destinations “out there”:  artificial gravity.  Based on known physics,  there is one and only one practical way to do this:  centrifugal force (“spin gravity”).  You cannot do that riding around in a simple Apollo-like space capsule,  you must be traveling in an object large enough to spin at a practical speed.  But you do not have to break the bank building “battlestar galactica”,  either.

To do spin gravity,  you substitute the centrifugal force of spinning motion for the pull of gravity.  Two things are important to the acceleration you get:  radius away from spin center,  and spin rate.  The science equation for this is very simple,  but only works if you use consistent units of measure.  Doing it as a ratio and proportion lets you substitute whatever units of measure are convenient and familiar:

If you like feet better than meters,  then use R measured in feet with 184 ft,  instead of 56 m.  R is the distance from the spin center (usually the center of gravity) to the location at which the acceleration is to be measured.  Measuring spin rate in rpm is pretty common for just about everybody.

Notice that you must use a large R to get a certain level of gees at a low rpm,  and vice versa.  The larger R is,  the bigger and more expensive your vehicle is.  The larger the rpm,  the more likely you are to upset the inner ear balance organs,  disorienting your occupants and making them sick.  It’s a tradeoff.

There is a second problem with small R:  the gradient of acceleration.  If you design for 1 gee at the deck,  your occupant’s head is above that deck at a lower value of R,  and so a lower level of gee.  The ultimate effect is lower blood pressure in his head than his feet.  Make that effect too big,  and he faints.

Most folks pulling high gee turns in airplanes while seated upright will faint within seconds at 6 gees without a “gee suit”,  but can withstand 2 or even 3 gees quite well.  A seated person is only about 1 m “tall”,  as opposed to nearly 2 m tall while standing,  so there’s an extra factor of two floating around in this somewhere.   We do need to be conservative.

A real aeromedical expert would know far more than I do about this,  but I would hazard the guess that we don’t want any more difference in blood pressure head-to-foot than would be equivalent to standing in a uniform 1.5 gee gravity field (3 gees of turn reduced by the factor of 2 for sitting vs standing).

We evolved to deal with the head-to-foot blood pressure difference at 1 normal earth gee,  so that leaves 0.5 gee’s worth of additional difference over a nominal height near 2 m.  So the max radial gee gradient in spin gravity designs ought to be near 0.25 gees/m,  or maybe a little (but not much) higher,  say 0.3 gees/m.

In spin gravity designs,  the radial gee gradient is inherent,  and is proportional to spin rate squared,  without any radial dependence.  To write its equation,  you divide the acceleration equation by radius:

Using about 0.3 gees/m as a maximum gee gradient,  the maximum spin rate allowable is about 16 rpm.  Since we don’t want spin rates above about 4 to 12 rpm anyway (so as not to sicken or disorient occupants),  this gradient limitation should not be an issue in our design.

So,  it boils down to using the smallest radius and the largest-tolerable spin rate to achieve whatever artificial gravity level is therapeutic.  We have direct experience at one full gee and at zero-gee weightless in space.  We have absolutely no direct long-term experience at any other level.  Thus,  in the absence of better information,  we have to assume we will deliver 1 full gee in our design.  So:

For well-trained astronauts going on a trip to Mars,  8 or possibly even 12 rpm spin rates might be entirely acceptable.  The resulting spin radii of 6.2 to 14 m are consistent with the lengths of capsules,  habitat modules,  service modules,  kick stages,  and the like.  A stack 13 to 30 m long,  spun end over end with the astronauts at one end,  provides both a simple rigid structure and one full gee at that end.

For more-ordinary citizens making such trips,  you have to slow the spin rate to what they can tolerate,  which is about 4 rpm.  The resulting spin radius is 56 m,  which is a much larger structure.  But,  if more-ordinary citizens are going to a place like Mars,  we are talking about larger vehicles anyway,  because we are talking about missions that establish large bases or full-blown colonies.  You still spin a long stack end-over-end as the simplest,  lightest,  safest structure you can design.  It’s somewhat over a football field long at around 112 m or so,  minimum.

In a design that spins end-over-end,  there is only one radius where you can have a deck for a floor at one gee.  That may not matter,  because we do not fight gravity here at home while we are prone asleep,  one third of round-the-clock.  That means your sleeping quarters can be at reduced gee,  even weightless.  Designing long cylindrical modules means you will have multiple decks,  with less and less gravity,  as you climb toward the spin center.

You send landers and surface equipment separately to Mars.  This spinning vehicle is what takes the astronauts there and back again,  fully fit and healthy both ways.

I would put the daily work stations and the gymnasium facilities out at the greatest radius,  nearest one full gee,  to inherently get in a full day’s exercise against spin gravity,  without having to deliberately schedule it.  I would put the sleeping quarters nearer the spin center,  because gravity while sleeping doesn’t matter to good health.  Recreational stuff I would put somewhere in between.

Given the very practical sizes involved,  there is no excuse to risk microgravity diseases by flying weightless to Mars.  We do need to experiment with these spinning-baton designs adjacent to the ISS,  rather than risking a Mars crew in an untried design.  There’s no excuse to take that risk,  either. 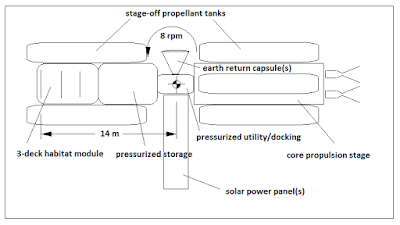 For doing variable gravity research in Earth orbit,  a spinning baton design is also just fine,  is easily assembled in orbit by docking modules together,  and has enormous interior volume (larger than ISS by far).  It also has all the partial gravity levels available for experimentation,  not just 0 gee.

This is about a dozen or so Atlas-5 HLV or Falcon-Heavy flights,  at around $100M or so each.  So you could get a far larger,  more capable,  and incredibly useful space station this way,  for around maybe $2-3 B,  versus the $100+B it took to build ISS.  And ISS cannot be used to research partial gravity because it cannot spin.  This spinning concept does need Bigelow B-330 modules re-rigged inside with radial decks. 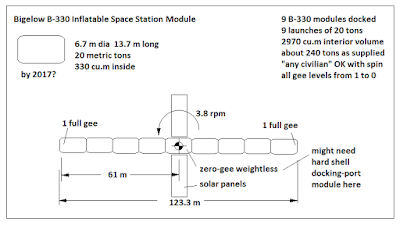 Concept for Artificial Gravity Adjunct (or Replacement) for ISS

An even more practical ISS free-flyer annex could be had by increasing the spin rate to 8 rpm,  with trained personnel.  That reduces to a cluster more like the Manned Mars Transit vehicle depicted above.  A linear baton of 4 modifed B-330's with a hard center module would be not quite 30 m long.  That center module would be an entry airlock,  with a docking port,  some solar panels, and some spin-up/spin-down flywheels.

Spun at about 8 rpm,  you have 1 full gee at the ends,  and every partial gee level down to zero at the center.  This could identify in 2 or 3 years what level of partial gee is "enough" for long deep space missions.  That answer would help support manned exploration for decades,  perhaps a century,  to come.  This is a crucial thing to do. 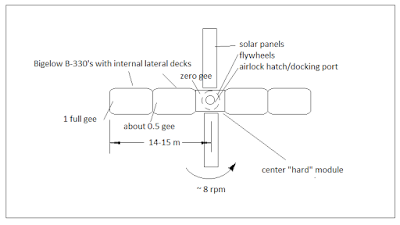 Just for the sake of argument,  let's assume it costs $100M to make each of these modules a flyable item.  Let's also assume that it costs somewhere near $100M to launch each one.  Let the ISS crew catch and dock them.  So,  you get a human experimental station for partial gee research,  plus 1300+ extra cubic meters of space station volume,  for a price in the neighborhood of $1B.  That's less than 1% of the original construction cost for the ISS,  although such hardware was not available back then.  It is now!

Now,  if I can sit down with open-sources knowledge and come up with a thing like this,  in about half an hour,  why hasn't NASA already started doing this?  If they are truly serious about sending men beyond the moon,  that is.