Funny Internet Forward Is Really Not So Funny

This seemingly-funny document is actually a right-wing “hit piece” that a friend forwarded to me. At first glance, it seems quite accurate (on a shallow level). It reinforces the conservative economic notions that most of us actually have, but it is actually quite misleading on some points, and it propagates dead-wrong lies about a couple of others.

See appended below the original document in boldface type, with my not-boldface comments inserted. The document’s final conclusion about replacing most of our elected politicians is "dead-nuts-on", although it was probably originally intended to turn us against the current administration and Congress.

Because it is the only game in town. Nothing competes with first class mail. Because nothing wants to compete, we have to make up our minds whether we want to continue this service as a tax supported item.

Social Security was established in 1935 - you have had 74 years to get it right; it is broke.

The original version under FDR might not have gone broke. It had its own separate funding account. The mistake was violating the original law to put SS funds into the general fund. This was done “to reduce the deficit” by exactly the kind of accounting that caused the Great Depression, the Savings and Loan scandal, the junk bond scandal, and the Wall Street crash of 2008-2009. Congress did it, and the courts let ‘em do it.

This entity was set up to make government-mandated risky loans, and in the 90’s, was mandated to make even riskier loans. The fix is easy and simple: failing a good faith effort to pay it back, the mortgagee goes into the army to work it off. By the way, same thing applies to the student loans I see abused every day teaching at TSTC, but no one complains about.

War on Poverty started in 1964 - you have had 45 years to get it right; $1 trillion of our money is confiscated each year and transferred to "the poor"; it hasn't worked.

Government giveaway “programs” and welfare payments do not work. Jobs do. So also do job programs that create jobs, not just job training. We have had none since the 30’s, when they worked very, very well. Bring back the WPA and CCC ideas, and millions will leave poverty, permanently.

Medicare and Medicaid were established in 1965 - you've had 44 years to get it right; they're broke.

These were actually working well until the population bulge of the baby boomers threatened the numbers. The way around this is simple: extra revenue funding until the “bulge” passes. Then they will be solvent again. These programs are examples of government programs that actually can work well, when managed and funded properly. Very simply, this is because they are not the only game in town. There are competing services by which to judge their performance.

Same comment as for Fannie Mae applies, in spades.

Trillions of dollars in the massive political payoff called the TARP bill of 2009 shows NO sign of working.

The statement is false on its face: the bailout did work, in that Wall Street is recovering nicely, thank you very much, although the recovery hasn’t reached anyone else yet (because “trickle-down economics” doesn’t really work). The real problem here is that the Wall Street giants were too large to let fail, because of the collateral damage. If we in some way prevent such giants from ever forming in the first place, we can let the market actually work, we can afford to let them fail. Thus we avoid any need for any future bailouts. So, how about a “market share tax” to discourage growth to threatening size? (This would apply to any industry).

And finally to set a new record:

"Cash for Clunkers" was established in 2009 and went broke in 2009! It took good dependable cars ( that were the best some people could afford ) replaced them with high priced ( people who couldn't afford to are now making payments ) mostly Japanese models so a good percentage of the profits, from the sales, went out of the country. And lastly, the American taxpayers are now going to be dinged with paying for yet 3 billion more dollars of our governments experiments to make our wallets even thinner.

Another lie. This program worked just fine, but suffered from egregious and malicious underfunding, just like NASA. In an age when oil imports threaten our economy, our foreign policy, and our national security, getting older gas-guzzlers and polluters off the road is a good idea. In a sour economy, anything that stimulates sales and manufacturing production is a good idea. In an age when the Japanese car companies are building cars in America with American workers, and the US car companies are building cars overseas with overseas workers, the “buy American” argument is both wrong and entirely inappropriate.

So with a perfect 100% failure rate and a record that proves that "services" you shove down our throats are failing faster and faster, you want Americans to believe you can be trusted with a government-run health care system? 15% of our economy? Are you crazy?

Here is what this "hit piece" is really about. With a couple of exceptions, the other western democracies do health care delivery just fine. We Americans have never corrected the massive abuses-for-profit of the pharmaceuticals giants, the medical insurance industry, and the malpractice-lawsuit “industry” in this country. If we corrected only those, we would be far better off, no matter what model we use for healthcare delivery.

Besides, there are many models for health care delivery, not just our private insurance-tied-to-employment approach, vs the British/Canadian approach that demonstrably fails (they are my “couple of exceptions”). Why has no one looked at Scandinavia, France, and Germany? What are they doing? What is Japan doing?

Most importantly, why do we not know what those other countries are doing? The answer is very telling: basically, because it is politically expedient in American party politics to frame the health care debate in terms of capitalism vs socialism, when in fact those labels hardly apply at all. They did it to us during the Clinton-era attempt to reform health care, they’ve been doing it ever since. We have a bunch of bad politicians, not statesmen, who hold the offices in control of all of these things.

Truly, the inmates are running the asylum! And what does this say about voters who put such pond scum in office? Maybe we need to let others in on this brilliant record before 2010 and just vote against incumbents.

My point, for some time now, exactly!! Vote for no incumbent unless you can personally verify that he did more good than harm while in office! (His political party is irrelevant to this decision.) Very, very few qualify.
Posted by Gary Johnson at 1:43 PM No comments:

Email ThisBlogThis!Share to TwitterShare to FacebookShare to Pinterest
Labels: Idiocy in politics 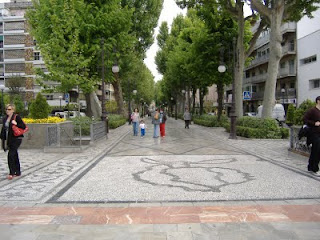 My fellow citizens, clean up your act!
Posted by Gary Johnson at 12:09 PM No comments: