This was a discussion topic in the forums on NewMars.com. I decided to try a bounding calculation to rough-out what might be involved. My first attempt was not very good, but I have double-checked these numbers, They are good.

For trips faster than about 60 days one-way, and stay times at Mars under about a month, the planets don’t have time to change relative position very much. Such travel is essentially a straight-line shot over a distance of about 60 million miles (see fig. 1). Longer travel times are different, because the orbits become curved, and the path along the orbit is much longer. 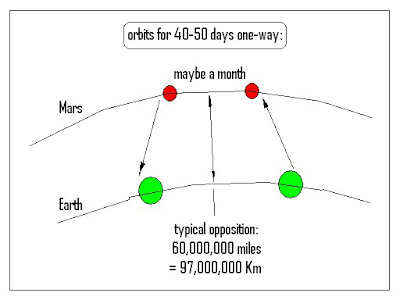 Along a straight-line path, at constant acceleration, the average and peak velocities can be estimated quite easily. Average velocity is merely the path length divided by the travel time. This is just high school physics math, but nothing better is needed.

I looked at two bounding cases: (1) vehicle acceleration so low that one thrusts to accelerate to the mid-point of the one-way path, skew-flips under power, and then thrusts to decelerate the second half, and (2) one accelerates “hard” at each end such that time spent in acceleration is only 10% of travel time for each of the two “burns” (the “10% tails” case). 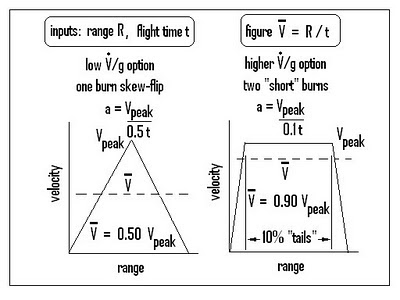 The data inputs here are path length 97 million km, and 39 days travel time. This figures to an average velocity of 28.79 km/s. To go there and back again, requires a total of 4 burns, each to the peak velocity.

The 10% tails option spends most of its time coasting at peak velocity, reflected in the higher average/peak velocity ratio. For the same average velocity, the “10% tails” option has a lower peak velocity, and a lower delta-vee requirement, by a substantial amount. However, the thrust levels demanded are substantially lower for the skew-flip option, since it has half the trip time to accelerate, instead of 10% of it.

In order to do a little better than a simple Apollo-style “stunt” landing, I decided to send a fairly substantial crew of 6 with two landing vehicles and two crew return capsules. I included a habitat module on the order of the old “Skylab” module. The idea would be to rotate the crewmembers on successive surface expeditions, 3 in each lander, to cover 2 separate landing sites.

My estimates for the habitat reflect stored supplies, no artificial gravity, but a radiation-sheltered room from which the ship may be maneuvered during a solar flare event. I simply guessed this module at 90 tons, same as the old “Skylab” station. There is enough volume in a module this big for a crew of 6 to stay sane and healthy for perhaps 6 months at a stretch. The design here is 3-4 months round trip.

The crew return vehicles would each seat 3 comfortably, all 6 in a pinch, rather like the original Apollo capsules. These would have an abbreviated service module with hypergolics propulsion for deorbit maneuvers. I simply guessed these at 5 tons each, for 10 tons total. See fig. 3. 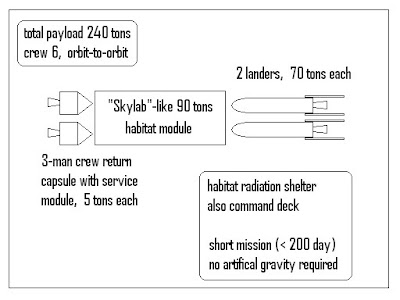 I wanted to rough-out the landers as single-stage nuclear devices. This would provide the option to leave these vehicles in orbit at Mars, to be used again.

Mars surface-to-orbit requires a little under 6 km/s delta-vee one-way. Accordingly, I roughed out a single-stage rocket for a total 12 km/sec delta-vee, using a solid core nuclear thermal Isp = 1000 sec. This allowed me 9% payload, 71% propellant, and a 20% inert fraction (to cover landing legs, a cargo crane, and maybe a bit of shielding around the reactor.

I figured the payload as 3 men and supplies plus some sort of a rover car, similar to what we did on the moon. I guessed 6 tons for this, and calculated just under 70 tons for each lander. For two landers, that adds 140 tons to the transfer ship payload. See fig. 4.

The old NERVA solid core engine tested as 1000 sec, with an engine thrust/weight near 3. This was insufficient for surface launch from Earth, but might work on Mars. A design update to incorporate the results from projects like Dumbo and Timberwind would very likely provide a 1000 sec Isp engine with thrust/weight 10+. 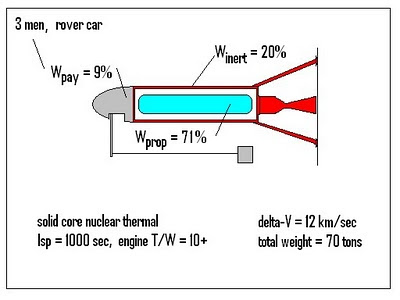 I looked at a variety of configurations, based around a core vehicle with a single engine or engine cluster, and some number of added propellant tanks (with no engines of their own). The idea would be to assemble this vehicle in low Earth orbit (LEO), and fly it to Mars orbit, then back to Earth orbit. Maximum recovered components provide maximum reusability for future missions.

I looked at a very conservative design for the core vehicle, to cover both the robustness necessary for reusability, and the connective structure to hold propulsion, tanks, and payload items together. I assumed 10% payload fraction (the 240 tons discussed above), and 20% structural inerts fraction. That leaves 70% for propellant load.

The tanks are also conservative, in that I assumed 10% structural inerts and 90% propellant. This should cover some sort of cryo-cooler equipment items necessary to store liquid hydrogen as propellant for the presumed nuclear engines. See fig. 5. 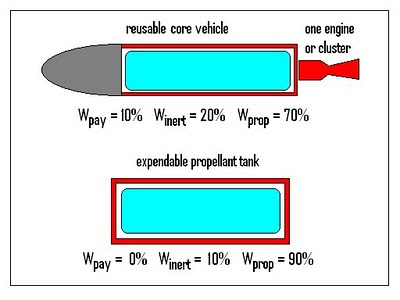 Not every configuration I looked at uses staging (in the sense of dropping empty tanks). For those that did, I assumed only two burn phases: (1) burn all the propellant out of all the tanks and then drop the empties all at once, and (2) burn on the propellant in the core vehicle. This is suboptimal, as one could drop tanks as they become empty (it might be necessary to do this in pairs to preserve weight and balance). Accordingly, my estimates of assembled vehicle weight and propulsive Isp may be a little bit high, but only by a very few percent. See fig. 6.

(1)baseline core vehicle without tanks, as a single stage (all recovered and reusable) 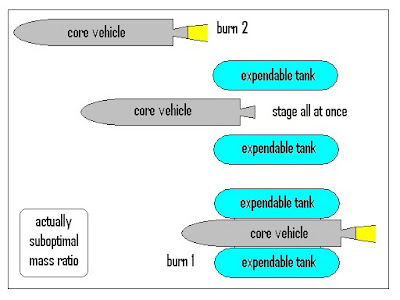 All of these configurations use the same core vehicle and 240 ton payload assembly. The transfer propulsion is on the core vehicle. It is assumed to make all four burns required by each round trip, and be reusable for several more trips.

I ran a weight statement for each of these configurations, based on the component weight fractions, the shipped payload (240 tons), and the core-tank weight splits.

From the 240 ton payload weight, and each configuration’s weight statement, one can estimate the departure weight of the vehicle that must be assembled and fueled in LEO. From that departure weight and the average acceleration required by the assumed kinematics (skew-flip or “10% tails”), one can estimate the minimum allowable actual thrust required of the engine system. 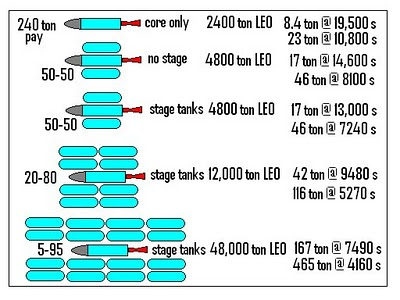 Figure 7 – Results for 5 Configurations, and for 2 Kinematic Options

The single-stage core-only configuration has a relatively low assembled weight in LEO (although still far too high for a single launch), but requires propulsive Isp beyond anything we understand with nuclear thermal rocketry, whether one looks at the skew-flip or “10% tails” scenario.

A variable-thrust electric approach such as VASIMR might possibly serve, although there are very serious questions whether an 8-24 ton thrust VASIMR can be powered by something that would fit this weight statement. For all the skew-flip configurations, a higher thrust phase is required for efficient orbital escape and capture at each end of the trip, something easily handled by VASIMR.

The single stage core plus non-expendable tanks, at a 50-50 core-tank weight split, has the effect of improved mass ratio and reduced impulse requirements. The 4800 ton departure weight is something that seems “reasonable” for assembly and fueling in LEO, although it is clear that many launches would be required.

For both the skew-flip and “10% tail” scenarios, the impulse requirements seem infeasible even for gas core nuclear thermal rockets (maximum in the 6000-10,000 sec range). The higher thrust levels make the VASIMR power supply problem worse, even in the heavier vehicle.

The two-stage core plus expendable tanks, at a 50-50 core-tank weight split, has the same departure weight of 4800 tons. The impulse requirements for the skew-flip and “10% tails” scenarios are reduced a little, but only a little bit. Even the “10% tails” impulse requirement is likely still infeasible for a practical first-generation gas core nuclear thermal rocket. A waste heat radiator is required, and would be rather heavy. It might not fit well in this weight statement.

The two-stage core plus expendable tanks, at a 20-80 core-tank weight split, has a larger departure weight of 12,000 tons. This is getting very ambitious for assembly and fueling in LEO. However, for the 10% tails scenario, the thrust level and specific impulse requirement looks very achievable for gas core nuclear thermal rocketry. The skew-flip scenario’s requirements still look infeasible for this type of propulsion.

The two stage core plus expendable tanks, at a 5-95 core-tank weight split, provides only a small further reduction in impulse, at the cost of an enormous increase in departure weight. 48,000 tons assembled and fueled in LEO is a rather daunting prospect, for only a reduction from 5270 sec to 4160 sec gas core Isp in the 10% tails” scenario (skew flip is still infeasible). There is no option here for solid core nuclear thermal main propulsion, and little prospect for it by extremizing the weight statement still further.

I would hazard a guess that solid core nuclear thermal propulsion would only become feasible if we multi-staged the core vehicle, including the nuclear engines. This is not an attractive possibility.

A large pulse propulsion vehicle in the 10,000 to 20,000 ton departure weight range would have the impulse to achieve the 39 day mission. The 2-4 gee vehicle accelerations available would cut the “10% tails” to 1% or less. Deliverable payloads would be more in line with colonization efforts that initial explorations, though, being around 10 or more times the 240 ton figure used here.

The “10% tails” scenario is preferred because of the substantially lower impulse requirements, in spite of its higher minimum thrust requirements.

The impulse levels reported here are being driven by the very high average velocities associated with a 39 day one-way timeline for the flight. These vehicle results are being driven very hard by those impulse figures.

If the electric power plant problem can be solved, then a 4800-or-larger ton VASIMR-powered vehicle operating on the “10% tails” scenario might be an attractive option. This would be a staged vehicle with expendable tanks, at a 50-50 weight split. The VASIMR would have to operate briefly at lower Isp and higher acceleration to effectively “get away”, then throttle back to higher Isp at low thrust, until the required peak velocity is attained. That same variable-performance scenario in reverse is required for effective capture into Mars orbit. A similar profile is required for the return.

If the high-temperature radiator problem can be solved, then a 12,000-or-less ton vehicle powered by a gas core nuclear thermal rocket operating on the “10% tails” scenario can do this mission. The impulse is slightly lower than the 6000 second design target of the ca.-1970 design data, and the thrust is in a feasible range.

Other Options to Consider:

Mass ratio and delta-vee can be improved slightly with any of these designs by leaving the lander craft behind in Mars orbit for future re-use. Subsequent missions then need only bring propellants for these landers, not the entire craft, up to the design lifetimes of the landers’ engines.

Leaving the rover cars and other exploration gear behind would ease lander propellant consumption slightly, and provide ready assets for a subsequent return to these sites.

It might be wise to re-run this analysis at a 60 day one-way time, in order to see just how strongly that parameter drives these vehicle designs.

It would be wise to explore just how best to design a pulse propulsion vehicle to do this mission. Such designs are not driven by payload weight (mass ratio-limited at a separately-defined Isp), but by departure weight (which actually defines the Isp).