I recently completed the final "stiff blend" experiments with the "ethanol VW". This was the 1973 VW Type 1 sedan that I had converted to E-85-only operation in January 2007. In fall 2010, I had re-converted this vehicle to gasoline-only settings, and tried a series of increasingly-stiff (high E-number) blends. To make such testing practical, I added an adjusting screw to the E-85 main jet to make this a "flex-fuel" carburetor. This old-technology vehicle is carbureted, with distributor ignition.

For these stiff blend experiments, I used no added intake air preheat, and no extra timing advance. For most of these runs, I used the gasoline-only jet settings on the main and idle jet screws. I used the E-85 accelerator pump discharge nozzle as it was. Later in the tests, at higher E-number blends, I reset the main and idle jet screws a little, to accomplish manually the same "compensation" that electronic fuel injection does automatically. This was necessary to maintain good drive-ability.

I tested this VW in terms of intake vacuum observations during in-gear coast-down. This was based upon the well-known fact that late ignition timing shows up as lower intake vacuum levels, all else being equal. Blend strength was determined by a simple forced added-water phase separation test. The theory behind this is that ethanol requires more advanced ignition timing, because it has a longer ignition delay. Thus, you have to "light the fire" sooner, in order to achieve peak in-cylinder pressures by about 2 degrees after top dead center crankshaft position.

What I found was absolutely no differences between gasoline-only and stiff blend performance up to about 40% ethanol in the mix (E-40 blend). For blends from there up to the maximum tested (E-56), there was a definite drop in coast-down vacuum, although it was not large. My data curves show a definitely-repeatable "shape" that is most likely a systematic gage-reading error in these on-the-road tests. Essentially, all these blends show just about the same vacuum loss, once 40% was exceeded. 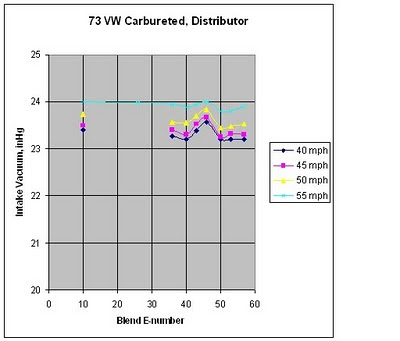 The VW blend experiment was inspired by earlier results in 2008 with stiff blends in my 1995 Ford F-150 pickup truck. This vehicle has distributor ignition and electronic fuel injection. I ran these stiff blends in it completely unmodified, and I still do today. The data for the truck were obtained from fuel mileage, not intake vacuum. I kept track of two driving cycles: "TSTC", which was a virtually-all highway commute 30 miles one-way to / from work at TSTC-Waco, and "SRMcL", which was general driving over shorter trip ranges around McLennan county, Texas.

Driving cycle on blend fuels did not seem to make much difference, after normalizing blend mileage to the corresponding gasoline-only average mileages on the same driving cycles. Somewhere just above E-40 blend strength, fuel mileage dropped dramatically. The performance characteristics above 40% ethanol were very smooth operation, low perceived power, and the sense that it was "sucking fuel too fast", confirmed later by the actual mileage data.

The data shown here are exactly the same data that were in the February 2008 "Ford Report 8" (see my website http://www.txideafarm.com, and navigate to the "ethanol projects" sub-page). A few more data points added later (by May 2008, but not included here) confirmed the same basic trend, and "pinned down" the critical blend strength a little better, to right at E-42. 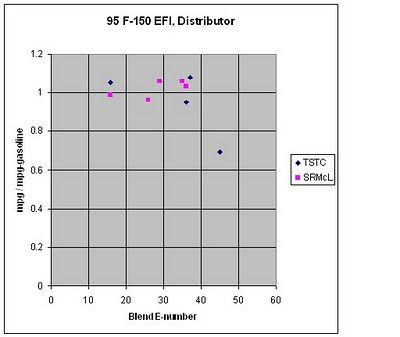 The most amazing thing about this is that two vehicles of such different vintages and technologies gave almost exactly the same answer from two completely-independent types of data. Timing is late on gasoline settings, in otherwise unmodified vehicles, above about E-40-to-42 blend strength.

I got pretty much the same answer, although not actually quantified, from a 1998 Nissan Sentra early this year. My best estimate was that I accidentally put a blend a little above E-50 in the tank, causing perceived low power, low mileage, but smooth operation (exactly what one would expect from late timing).

It looks to me as if above about E-40 to E-42 blend strength in an unmodified car, the timing is suddenly late, as if "turned off like a light switch". Up to that point, one cannot in any way tell stiff blends from straight gasoline (either by mileage or by intake vacuum).

I would speculate that in blends under the critical level, the gasoline component controls the effective ignition delay, while for blends over the critical level, the ethanol component controls the effective ignition delay. Thus for stiff blends, the required timing setting is not smoothly dependent upon blend strength, but instead is a step function triggered by a critical blend level near 40-42% ethanol.

This finding has serious implications for the design of factory flex-fuel vehicles.

You heard it here, from me, first!
Posted by Gary Johnson at 8:17 PM