End of an Era Need Not Be End of a Capability

This one appeared as a guest column in the Waco Tribune-Herald newspaper of Waco, Texas. It is not about exploration, but about useful and necessary infrastructure in Earth orbit.

The last shuttle flight is complete, the orbiters are headed for museums, and thousands are being laid off at Cape Canaveral and Mission Control. There is going to be a hiatus in America’s ability to launch its own astronauts that may continue for a few years.

Actually, I do believe the private companies like SpaceX will fill that void sooner rather than later. I also believe there will be a second, privately-owned, space station up there, very soon.

But, these private ventures, which build upon 50 years’ expertise, will require smaller teams on the ground at the Cape and in Mission Control. Except for local employment prospects, that’s a good thing, because it means spaceflight will become less expensive.

I predict that more than one commercial spacecraft will be flying soon, and that some of our familiar launch rockets will be updated and man-rated to launch them. That’s what NASA’s commercial spaceflight initiative was supposed to achieve, and it looks to me as if it is succeeding.

Here is what we will have: space capsules as taxis to orbit, space stations conducting research and business, and NASA looking outward beyond orbit with men for the first time in 40 years. But, something is missing from that picture!

Oh, yes, the “space repair truck” function of the space shuttle will be missing. Remember it?

It was the self-maneuvering shuttle with the adaptable human crew, that enormous cargo bay as a work area, and that manipulator arm, which repaired so many important satellites, most notably the Hubble Space Telescope.

In hindsight, having to launch that capability in every mission makes less sense than having two or three vehicles like that up there all the time. When you need one, send the crew and some thruster fuel up with one of the new space capsules: same results, far less expense.

All we need is a crew cabin, a space frame about the size of the shuttle cargo bay, that manipulator arm, some thrusters, and thruster fuel tanks. 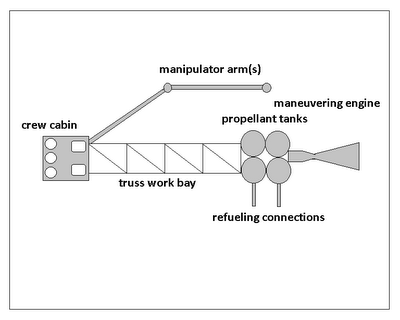 These could be assembled in place by docking-together modules small enough to be launched by the rockets we already have. This is not a gigantic project, there is no new technology here, just a planned series of launches to regain a capability that we lost with Atlantis’s final landing.

It makes sense to have one in the highly-inclined orbit near or docked to the ISS, one in the more standard orbit eastward from the cape (the kind of orbit Hubble is in), and one in polar orbit to service those satellites. This may not be exploration, but it would certainly be helpful to what we are already doing in space.

There will always be satellites needing repair, and we already have one space station to repair, maintain, and upgrade. We might even use this capability to help build the new exploration vehicles.

I recommend this idea to NASA as something worthwhile and necessary. Maybe some of those laid-off workers could be re-hired to carry it out.
Posted by Gary Johnson at 1:06 PM