What Should the Government’s Manned Space Exploration Strategy Be?

Going beyond the moon requires fundamental changes in the way we approach spacecraft and mission design. Mars makes an excellent target for starting this new process.

The key is going back to fundamentals to figure what we really want out of exploration, then looking at required technologies, given that crew survival, safety, and self rescue are THE paramount design requirement for every single phase. You do that for the most challenging mission (Mars) FIRST, and force every single piece of hardware to be totally reusable. 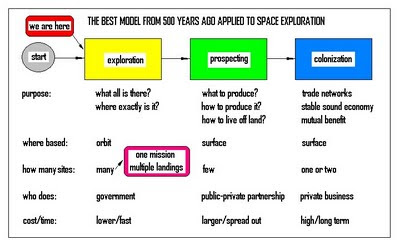 Exploration and the Greater Scheme of Things

This produces one set of "tinkertoys" that takes you anywhere within range: Mars, Venus, NEO's, and Mercury (the entire inner solar system). Plus, you don't have to keep launching components, just propellants and supplies.

This is my Mars mission paper to be presented to the Mars Society convention in Dallas, August 4-7. A shorter version is posted at http://exrocketman.blogspot.com, dated 25 July, 2011. 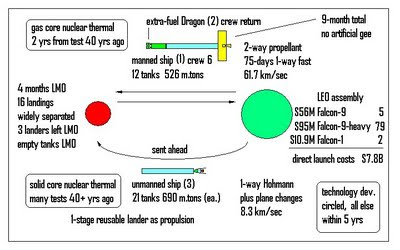 To go further soonest, we simply upgrade the inner solar system “tinkertoys” with knowledge obtained between now and then. Add a provision for artificial gravity, and either solve the food preservation problem, or add frozen food (which is bigger and heavier). That should make two-or three year trips feasible, most likely limited by the accumulation of cosmic ray exposure. It puts the main belt asteroids and some comets within reach. 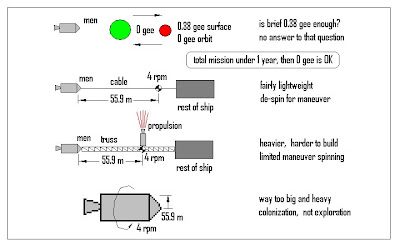 The Artificial Gravity Problem As We Know It Now

If a better way to shield against radiation can be devised, and even faster “hot rod propulsion” developed, the giant planets and outer solar system become reachable. It would help greatly to know how to build closed-ecology life support by this time.

At this point, we have to repeat the design process from scratch, because upgrades to the inner solar system “tinkertoys” are no longer feasible. We will know more about what to do when that time comes. The target for design should be the Kuiper Belt, where Pluto is.

I suggest some version of the old Project Orion nuclear pulse propulsion. One must build much larger ships for this: it has the odd characteristic of working more efficiently, the larger the mass to be moved. 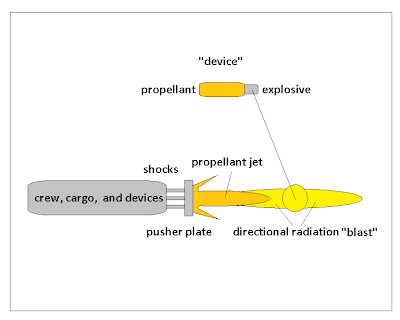 A Place To Do the Supporting Work

The kinds of “hot rod propulsion” that we will need to explore these places are very dangerous to develop and test on Earth, because the energy sources for the drives are all nuclear. We need a safe place to test, but it has to be dynamically stable (you cannot test a rocket engine in zero gravity where every test is a flight test).

I suggest the airless, waterless, uninhabited moon. Pick a smaller crater with high ring walls, plant a base adjacent to it, and put the test stands down inside the crater. It’s reachable from Earth without any exotic propulsion at all, and the mildest of the “hot rod propulsion” techniques just makes it less expensive. Perfect!
Posted by Gary Johnson at 1:30 PM