12-15-09 Red Letter Day: Ethanol VW Experiment Complete Presents a results summary for the “ethanol VW” as modified to run on full E-85. It documents the factor 1.15-1.20 increase in power and thermal efficiency relative to plain gasoline. It also documents the actual loss of fuel mileage (82% of gasoline), which is not in proportion to fuel heating value ratio (71%).

11-12-10 Stiff Blend Effects in Gasoline Cars Presents the effects of stiff blends in the former (full E-85) “ethanol VW” compared to the same stiff blends in an unmodified fuel-injected Ford F-150. The data demonstrates that there is approximately an E-40 limit for unmodified in fuel-injected engines, and that mileage with lesser blends is statistically indistinguishable from mileage on plain gasoline. A maximum of E-35 is recommended to avoid harmless but irritating cold start misbehavior.

11-17-10 Nissan Mileage Results on Blends The article reports finding the same blend limit of about E-40 in the unmodified fuel-injected Nissan. Mileage on lesser blends is essentially identical to mileage on plain gasoline. The results are identical to those of the Ford F-150.

2-12-11 “How-To” For Ethanol and Blend Vehicles This articles presents generalized “how-to” for doing your own E-85 conversions, and for running your own stiff gasohol blends in unmodified fuel-injected engines. There are 3 items to address in modern automotive conversions: mixture ratio, ignition timing, and extra intake heat. Slow-turning “under-square” engines in antique farm tractors, and airplanes, are insensitive to the timing issue. The only issues to address for stiff blends in unmodified vehicles are calculating the E-number from the fractions of E-85 and gasoline, and “calibrating” the marks on the fuel gage.

5-5-11 Ethanol Does Not Hurt Engines This article discusses actual experience with materials compatibility and fuel system housekeeping issues. It debunks some still-widely circulated myths. With the exceptions of Plexiglas and Lexan, and the antique pot-metal castings and lacquered cork floats, “if it’s good for gasoline, it’s good for ethanol” is a pretty good rule of thumb. The vast majority of the small engine troubles widely reported trace directly to pre-existing dirt and massive water bottoms in fuels systems. These get mobilized suddenly when ethanol enters the mix and cause problems in fuel metering devices, not the engines themselves. Those contaminants should not have been in there in the first place, for any decently-maintained and operated equipment.

8-9-12 Biofuels in General and Ethanol in Particular Presents a further (repeat) debunking of myths about ethanol in actual motors. This was in response to a published newspaper article circulating those same myths. Covers the engine damage myths and the low fuel mileage myths.

The vehicle in this article is the same Nissan that was reported in the 11-17-10 article. It is a 1998 Sentra with the GA-16 1.6 liter 4 cylinder engine, and automatic transmission. It was my wife’s car for several years. Once I started driving it, I began the blend experiments. I recently had the engine overhauled, which “calibrated” my best guess as to its design life. That overhaul also corrected a long-term chronic oil leak through the front seal. This was a “real-world” flawed machine, as are all the other vehicles in the other articles. See Fig. 1. 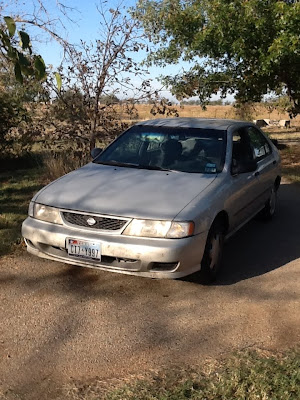 We bought the car used 6-1-99 with 15,560 miles on the odometer. It was clean, and seemed to be in good condition. It drove well and got good mileage. I did all the routine maintenance such as oil changes over all the years we have had this car. I used Castrol 20W-50 oil in it. A new distributor rotor fixed an ignition “no fire” failure at 42,707 miles. The oil leak started about 53,705 miles, when we fixed an exhaust leak. Remarkably, my records indicate no transmission repairs at all, just routine fluid and filter changes.

This car began experiencing failed starts December 2002 at odometer 70,360. These were erratically recurrent, and I finally traced them to weak dry compression (worn rings). The “fix” that I used for a long time was to squirt about a teaspoon or two of motor oil into each cylinder, which raised compression just enough for the control chip’s cold start mixture settings to actually ignite. As this condition worsened with age, it became necessary to open the throttle while cranking to raise compressed pressures sufficiently.

Minor items included a wiper linkage repair November 2004 at 96,286 miles, and replacement of a plugged PCV valve September 2005 at 105,993 miles. I re-rigged the crankcase ventilation to an overboard dump November 2006 at 123,410 miles in order to lower crankcase pressures as a means to slow the worsening oil leak. It was basically ineffective.

In June 2007 at 137,977 miles, I started adding Lucas Oil Stabilizer to the crankcase oil charge, in another effort to slow the oil leak through the seal. This stuff also has the effect of greatly arresting cold start wear, and raising the dry test compression pressures by more effectively sealing the worn rings. My erratic cold start failure problem essentially went away. I started about 19% additive, and worked up to 50% additive by about 140,000 miles, finding it minimally effective at slowing the oil leak rate. Slowing down actually helped more.

There was a “breakdown” requiring a tow and repairs May 2007 at 136,398 miles, due to water ingestion in street flooding in Beaumont. It did require a new alternator. I replaced the starter March 2008 at about 156,733 miles, and the first front axle / CV joint assembly about June 2008 at 159,230 miles. The transmission-side fan on the radiator required replacement about July 2008 at 160,806 miles. This flurry of significant repairs suggests that the intended life of the vehicle was about 150,000 miles. Such a design life would be consistent with a minimally-compliant catalytic converter designed to last at least 150,000 miles under the federal motor vehicle standards.

I had the engine drive belts replaced July 2009 at 185,297 miles, and had to repair the battery cable assemblies soon after. That was about the time we bought my wife a Toyota Prius, and I started driving the Nissan. I “calibrated” the gas gage marks and characterized fuel mileage on gasoline over the commute driving cycle to TSTC and back. I got all this done by late August 2009, at 186,489 miles. After that, I started driving the car on various “stiff” gasohol blends made by splash-blending E-85 and unleaded regular in the tank. I did add a Schrader fitting to the fuel line so I could test my blends with samples drawn from the feed to the fuel rail. That is the only modification I ever made. See fig. 2. 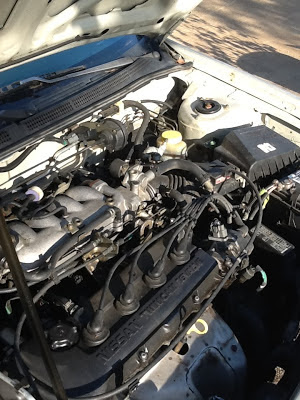 I had to replace the instrument cluster when the odometer failed October 2009 at about 188,000 miles. This, too, is evidence the design life of the car was closer to 150,000 miles. Best estimate is that I replaced the cluster at 188,605 miles, based on driving over distances that I knew well. The new cluster was a slightly-used part, and had 28,291 on it. The correction factor to original miles is thus replacement odometer reading + 160,314 = original miles. I replaced both drive axles and hubs, plus brake rotors August 2011 at 210,641 original miles. The crankcase leak got really bad that same month.

It was December 2011 at 214,424 original miles that I had the engine torn down and overhauled. That front seal was literally gone: an open annular hole. The main and rod bearings were “down to the red metal”, and the chain tensioner had been worn out, eroded completely through its phenolic layer. The timing chain was literally cutting steel from the back plate.

It was a full overhaul: new rings and pistons, reamed cylinders, new bearings, and a regrind on the crank, plus new oil and water pumps. The existing distributor, air conditioner, alternator and starter were retained. This engine had definitely been operated past its useful life, and was mere hours from throwing a rod. I believe with very good reasons that the intended design life was closer to 150,000 miles than the 214,000 miles I achieved. I believe that the only reason it went that far was because of the heavy usage of Lucas additive, which sharply reduced cold start wear. With the new tight bearings, I am using 5W-30 oil now, with no additive yet.

I replaced the EGR valve, and repaired the wiper linkage again in June-July 2012, around 220,000 original miles. June 27 2012 at 220,207 was my first check engine light with “catalytic converter not working” as the code. I replaced the other cooling fan on the radiator August 2012 at 221,827 miles. The pattern with the “catalytic converter not working” codes proved to be very interesting. If I ran plain gasoline (really E-10 gasohol these days), the check engine light would come on within days. About a week after returning to nominal E-30 blends, the light would go out. That pattern and otherwise good drivability continues to this publication date: November 15, 2012, at 225,196 miles.

My interpretation of this pattern of catalytic converter behavior is very simple: the E-10 they sell as regular gasoline is almost as sooty-burning a fuel as plain gasoline. My stiff blends ranged from E-20 to over E-40, usually E-30 plus or minus 5 points. That’s a lot more ethanol in the mix, which burns with a soot-free flame alone. Catalytic converters usually fail due to soot plugging or coating. Soot is inevitable in the exhaust system. It simply cannot all burn quickly enough in the cylinder before the exhaust valve opens. No solid fuel material can.

Running a stiff blend means there less soot in the flame, so there is less soot sent into the exhaust system to contaminate the converter. Further, there is a solvent action of the ethanol in the flame that acts to strip off carbon deposits somewhat. This would also help clean the converter of soot deposits to one extent or another.

I started using stiff gasohol blends at 186,489 miles, which is way past the apparent design life of the car and engine (about 150,000 miles or so). I am surprised the “converter not working” code did not appear sooner, but I first saw one using the occasional tank of plain gasoline at about 220,207 miles. To this day, that light goes out, indicating the converter resumes working, within about a week of filling with a nominal E-30 blend.

The petroleum fuel lobbies have convinced the EPA that blends “stiffer” than E-10 might harm emissions equipment. That’s why approval for E-15 has been delayed so long, and with recent-model restrictions so severe that we will likely never see it offered at most filling stations.

But, in direct contradiction to this, my experience strongly suggests that “stiff” ethanol blends actually extend catalytic converter life, by literally cleaning out some of the soot that “kills” them.

My F-150 pickup also has over 200,000 miles on it, and has been running E-30-something blends for almost 7 years now. Its tailpipe is clean as a whistle: bare steel. It used to be a bit sooty before I started using stiff ethanol blends. It will be very interesting to see how long that catalytic converter lasts. My Nissan experience suggests it will last a very long time yet: the design life of those pickups is reputed to be far longer than the Nissan’s apparent 150,000 miles-or-so.