Riding the Steam Train in the Locomotive

This is me waiting to board the Texas State Railroad steam train in Rusk, headed for Palestine, about 30 miles away. Ellen bought me a round-trip locomotive cab rider ticket as a birthday surprise. It's hard to imagine a better present, as much as I like the old steamers. I had not been inside a working steam locomotive cab since I was two years old (and I still remember some of that). 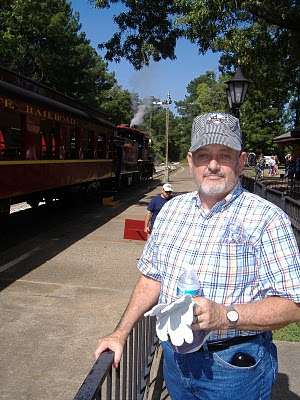 This photo is of engine Number 201, which pulled the train I rode. My "station" was on the deck plate between the engine and tender, right behind the engineer (seen here) and fireman (out of sight on the left). You can see how open that cab is, wide open on the back, side and front-facing windows. It was a 100 F day when I took this ride. Depending upon the firing rate, it was 110 F to 140 F in that cab, running down the track at 15 to 20 mph, typically. I had a blast, but the three of us drank that entire water barrel dry before we could return to Rusk. 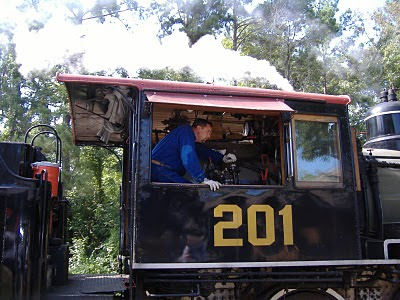 This is a shot of the firebox door, between the two crewmen, pretty much where I stood. You can see the fire coming out the sight hole. Running down the track, it was a little too hot on the feet to stand right in the center. I spent a lot of time on one side or the other, hanging out the side to get some cooler air. So also did the crew hang out their windows, and for the same reason.

Number 201 is a 1901-vintage A. L. Cooke 4-6-0 locomotive. Originally a wood-burner, this one was converted to fuel oil long ago. Once the fire "looks right" (atomization), you simply adjust the injection rate to get a gray haze out the exhaust stack. Clear is too lean, black is too rich. Simple. And, you watch the sight glass to make sure there's enough water in the boiler, and the pressure gage to make sure the steam pressure isn't too high. 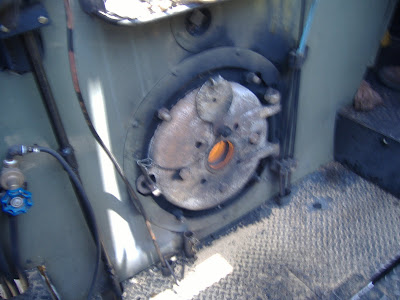 This is a good shot of Number 201 taking on water in Palestine. You can't see the engineer's controls from outside like this, but he had a big steam throttle overhead, the "Johnson bar" (forward-reverse) far in front of him, and a set of steam valves that gave him both a locomotive brake, and separate brakes for the rest of the train. He also had a steam-power valve for the locomotive bell. The bell could also be rung manually with a pull-rope. Either crewman could ring the bell or sound the whistle. 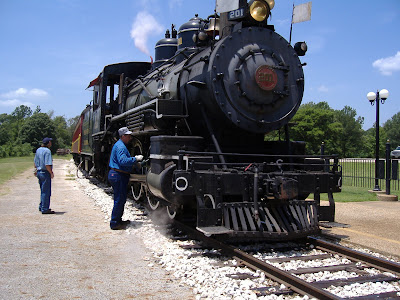 This last shot is also in Palestine while taking on water (we used a fire hose strung underneath the tender for that). This angle shows the train that Number 201 pulled. We had 3 passenger cars and what looked like a baggage car. Some of the passengers rode "open air", others were inside under air conditioning (that's where Ellen rode).

We used about 750 gallons of diesel oil getting to Palestine, according to the fireman. The tender was depleted of water to about 25% of its 5300 gallon capacity, which took about 30 minutes to refill. 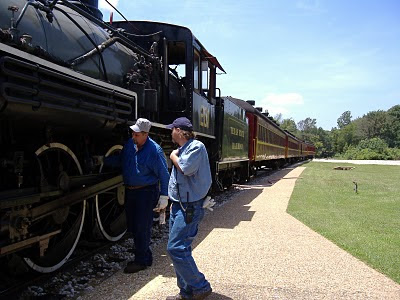 All in all, it was a wonderful ride. After spending hours with the crew in the cab, I think I could drive or fire the locomotive. (I also understand that it really does take two to operate it.) What a ride!
Posted by Gary Johnson at 8:58 AM