I found three mistakes in the data used for the “Feasibility of a Manned Mars Exploration Mission Concept” study, dated 12-15-10. These were (1) an incorrect payload capacity for Falcon-9 to LEO, (2) an over-estimate of the minimum delta-vee required for Hohmann orbit transfer to Mars, and (3) an over-estimate of the weight of a Dragon capsule to be used for crew return. The effects of these turned out to be minor, but are corrected herein.

One other item was investigated: the orbital maneuvering capability of the existing Dragon capsule was greater than expected, especially if extra thruster fuel is carried in the unpressurized cargo section. This eliminated the need for an extra service module to handle the delta-vee needed for getting the correct entry trajectory from an emergency free return / loss of vehicle scenario. The effect of this, plus error (3) above, reduced the weight, development needs, and cost of the manned vehicle a little.

The effect of the Hohmann delta-vee error would have been to reduce the size and cost of the three unmanned vehicles, except that these also need significant orbital plane change capabilities at both Earth and Mars. Adding in the plane change capability put the required delta-vee very close to the conservative estimate used in the original study. Thus, these vehicles did not change.

The effect of the Falcon-9 payload capacity error was taken care of by the more in-depth look at the real weights and delta-vee capability of the Dragon capsule, which allowed the manned vehicle to go from a 14 tank configuration in the original study to a 12 tank configuration reported here. The only Falcon-9 launches were to put the two Dragons in orbit for vehicle assembly.

One other item was looked at, but without effect on weights or launch costs. This was an allocation of what functions would be contained in each of the three habitat modules. This was with due regard for a radiation protection by packaging of water and wastewater tanks around the command “deck”, plus a little steel plate. A portion of this module would have several low-diameter long tanks disposed around the inside periphery, with a steel protection shell inside that. The portion devoted to science would have none. The other two modules are much more open inside, having neither tanks nor steel shell.

I do not know how I misread the LEO payload capacity of Falcon-9 from Canaveral on the Spacex website, unless I looked at pounds and thought I was reading kilograms. Perhaps I did, but in any event, the corrected chart is figure 1 below. Having the correct payload capacity gave me a very good estimate of the weight statement for the Dragon capsule, which turned out to be much lighter than I had been assuming in the original study. This effect is what lightened the payload of the manned vehicle, and reduced the number of propellant tanks used in its assembly. 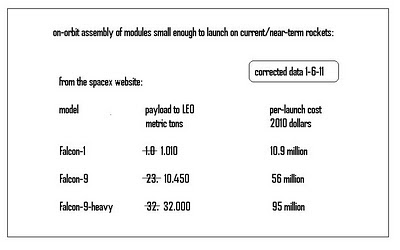 It should be noted that most of the modules in these concept vehicle designs are in the 30-32 metric ton weight range, launched with Falcon-9-heavy. Thus, most of the data for the two designs are unaffected by the errors. It was the two Dragons used as crew return vehicles that are launched by Falcon-9’s, and this did not change in the count of launches made. The empty engine shells for the two gas core engines were estimated at around half a metric ton each, and launched by two Falcon-1’s, also unchanged.

I assumed that a fully-loaded Dragon would “saturate” the payload capacity of a Falcon-9 from Canaveral. Allowing a little off for the aeroshell on its nose, that puts the fully loaded capsule right at 10 metric tons. According to the Spacex website, this capsule is capable of carrying 6 metric tons up to LEO, and returning with 3 metric tons on board. The website also indicates there is 10 cubic meters storage volume in the pressurized capsule, and 14 cubic meters in the unpressurized module. There is 1290 kg worth of thruster fuel and oxidizer in the capsule for its Draco thrusters, identified as monomethyl hydrazine and nitrogen tetroxide. I assumed a specific impulse of about 330 seconds for these, that being about 98% of the vacuum value commonly reported for this propellant combination. 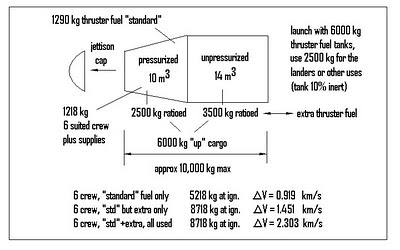 The results were astonishing. Using all of the “stock” on-board propellant as delta-vee fuel (not possible, attitude must be controlled), the capsule has a little under 1 km/second capability. But with 6000 kg of extra thruster fuel tanks in the unpressurized section, the capsule has near 2 km/sec delta-vee, even with 6 suited crew and minimal life support supplies on board. Intuition suggests this is probably sufficient to adjust trajectory for a safe emergency reentry if the main propulsion on the manned vehicle fails. The only remaining question is whether the Dragon’s heat shield would survive the 29 km/sec reentry for the fast trajectory in this concept.

As stated in the summary, I made no changes to the unmanned vehicle design. For the manned vehicle, the reduced weight estimates for the two Dragon crew return capsules allowed reducing the vehicle stack by two common hydrogen tank modules. The revised vehicle stack is depicted in figure 3 below, and the revised performance plots in figure 4 below. 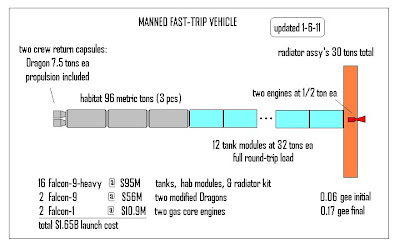 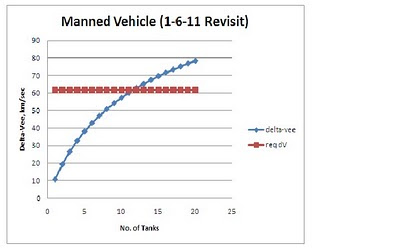 A lot of stored supplies (water, oxygen, and food) are required for a 9 month mission. I assumed these would be stored in the module used as a crew sleeping quarters, because the sleeping berths for 6 persons are actually quite small. Two restroom/bathing facilities (rendundancy) could be located in the same module, as these are also rather small volumes. Some of the water and wastewater tankage is here, and must be connected with the rest in the command module.

Intuition suggests that the radiation-shielded command “deck” and science stations would pretty well fill another module. This is because the command deck is surrounded by a “carpet” of water and wastewater tanks around the inside periphery of the module for radiation shielding in the event of a solar flare. This shielding effect is augmented by some thin steel plate inside the tanks. Enough volume is shielded to contain the entire 6-person crew plus one restroom facility and about 3 days of supplies. The science stations are unshielded. The purpose in radiation-shielding the command “deck” is so that the ship may be maneuvered, even during a radiation storm event.

The third module is the common room living space plus galley. Recreation and exercise activities are conducted here. This is the big open space, complete with substantial outside views. I put this in the middle, with the command module forward, fitted for docking with the two crew return capsules. The crew dorm / storage module is aft, and docks directly to the stack of common propellant modules. See figure 5 for the general layout. 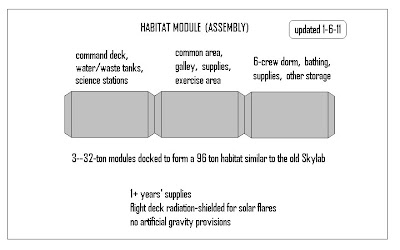 Fig. 5 – Habitat for 6 for Up To 1 Year, Functions Allocated Among 3 Modules

Effects Upon Overall Mission Design:
There were no effects upon the design of the three unmanned vehicles, because orbital plane changes add to minimum delta-vee capability in such a way that my original estimate was ballpark correct.

There was a payload mass reduction in the manned vehicle such that two propellant tanks could be deleted, reducing the total launch requirement by two Falcon-9-heavy launchers. The overall mission is summarized in figure 6 below. 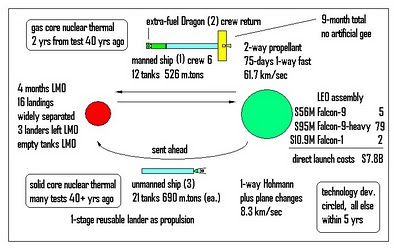 It should be noted that virtually everything about this mission could be launched by Spacex rockets available now or within about 5 years, and that none of these are so-called “heavy-lift” launcher developments. There are only two rocket technologies assumed for the mission that not currently available: the solid core and gas core nuclear thermal rockets. The solid core assumed here is an update to the old NERVA devices tested quite successfully as late as 1973. The gas core is assumed based on projected characteristics of an engine design that had come within about 2 years of first article test, when the entire nuclear rocket project was cancelled about 1972. These things could be rapidly recreated, and the gas core engine finished.

The only other serious technology lack would relate to the survivability of the Dragon and its crew on a very high speed return trip emergency. The average velocity is near 29 km/sec on the 75 day trip. This is well beyond a Hohmann free return from Mars, which would be near 15 km/sec. There would be concerns about both the heat shield, and deceleration gees during reentry. However, intuition suggests both problems are solvable with minimal impact to the basic capsule design.

Total direct launch costs reduce by two Falcon-9-heavy from the original study, down to $7.8 B.

There would be technology development effort costs for bringing solid core nuclear rockets back “on-line” with a very minor update. These should be minimal if a lean, mission-focused contractor can be retained.

There would be significant technology development effort costs for finishing the development of the gas core nuclear rocket. These might be of significant size, even with a lean, mission-focused contractor. This effort will also likely be the pacing programmatic element for overall project schedule.

There would be a very minor effort to reconfigure the Dragon for use as a Mars crew return vehicle of a fast-trajectory mission. The issues to resolve are: integration of extra thruster fuel in unpressurized storage, and upgrade of heat shield and entry trajectory for 29 km/sec entry speeds. Spacex itself could most effectively do this, being the manufacturer.

Intuition still suggests that this could be done for around $12-15 B, if lean contractors are retained, pretty much as suggested in the original study. I would hazard a wild guess at 10 years to readiness, paced by the gas core engine effort.
Posted by Gary Johnson at 5:30 PM