As I said in a previous posting (8-9-11), I had some second thoughts about the back-up propulsion for my fast trip Mars mission paper, presented at the Mars Society convention in Dallas, Texas, August 4-7, 2011. My backup had been the VASIMR electric propulsion scheme, thinking it a breakthrough in thrust for the power consumption. Based on what I saw at the meeting, it is no breakthrough, and is really mostly unsuitable for fast trips to Mars.

My second thoughts centered around an alternative slow-traveling vehicle requiring artificial gravity, because the manned mission duration would exceed the 1 year known to be tolerable. This vehicle would be powered by the same solid-core nuclear thermal technology I assumed in my landers, derived from the NERVA tested successfully 4 decades ago. I planned this alternative around simple minimum-energy Hohmann transfer orbits, because it is easy.

That still leaves the gas-core nuclear thermal-powered fast trip vehicle, which is still my baseline. I took a closer look at the orbits and the near-straight line “shots” across the solar system at the higher travel speeds. This verified my earlier crude ballpark estimate of the fast trip velocity requirements. All of this is illustrated here, at a level of analysis no deeper than is required to confirm the concepts and their feasibility. For example, I used circles to approximate the actually slightly-elliptical orbits of the planets. To first order for a feasibility check, this is “good enough”.

The baseline “fast trip mission” sends a fleet of three unmanned ships to Mars parking orbit ahead of the manned ship. This fleet is propelled by the landers themselves, and comprises all the propellant required to support the landing operations, plus enough to send these assets one-way to Mars by Hohmann transfer. Figure 1 shows the initial Hohmann transfer for these unmanned assets. Note that there is an opposition during the unmanned flight to Mars.

I looked for ways to center my manned fast trip about that first opposition, without adding too much extra time in orbit to the manned mission. This did not prove feasible, so that the manned fast trip is centered about a second opposition some 779 days after the first one. The mission calls for 16 weeks at Mars making landings, which would be 56 days to either side of the opposition. A little time spent making rough calculations gave me an “optimal” one-way flight time pretty near 83 days for the “average” mission these approximations represent. This is shown in Figure 2.

The total mission time (for the men) is under 9 months, so no artificial gravity is required. Note that the total time the propellant tanks sent unmanned must maintain the liquid hydrogen is well over two years – rather challenging! The vehicle designs are as shown in Figure 3, and are essentially unchanged from my paper. The direct launch costs are pretty much as I estimated in the original paper.

Guessing that total program costs are about 6 times the direct launch costs gives something like $50 billion to mount this mission, given the right team. Those figures are similar to the ones in the original paper. That “right team” issue is also discussed in more detail in that paper. See the 7-25-11 posting for an on-line version of that original paper.

If the manned vehicle is comprised of the same basic modules, but with solid core nuclear engines instead of the gas core engines, then single stage two-way flight, even on a Hohmann transfer, is not possible. But, a single stage transfer to Mars can be flown, and the empty tanks left there at Mars. In this way, a single stage return to Earth can be made, without relying on propellant already sent unmanned to Mars. This is a safety issue: what if rendezvous should fail in Mars orbit? The crew needs a way to return anyway.

The Hohmann transfer to Mars is identical to that in Figure 1. All four ships travel together as a single fleet: 3 unmanned and the one manned vessel. It is not possible to return by Hohmann transfer until the second opposition approaches, as illustrated in Figure 4. These oppositions are separated by 779 days, which leads to the timelines shown for the return in Figure 4. Thus, total manned mission duration is about 2.66 years, requiring the use of artificial gravity to protect the health of the crew, and considerably more packed supplies for the longer mission. Time at Mars about doubles, allowing for 16 2-week landings instead of 16 1-week landings, as in the baseline.

The unmanned vehicles are unchanged from my paper. The manned vehicle is necessarily bigger than the baseline design, driven by the substantially lower performance of solid core nuclear thermal rockets (SC-NTR) vs. gas core nuclear thermal rockets (GC-NTR). The solid core vehicle is substantially longer and about twice as heavy as the baseline gas core vehicle. The “payload” is larger, too, driven by the need to pack about 3 times as much supplies, with some of that bulky, heavy frozen food. These are depicted in Figure 5.

The return vehicles, command module (also the radiation shelter), habitat module, and supply storage modules are the same, I just needed 3 storage modules instead of one. I did take a closer look at the habitat module, since more space is needed for the longer mission to maintain psychological health. The easiest way to do that was to make the habitat an inflatable, along the lines of the Bigelow Aerospace modules already in experimental flight test now. Equipment and floor structure would be stowed along the axis for launch, and folded out into position once the module is inflated, as illustrated in Figure 6.

The same module could be used on the baseline fast trip vehicle, there is no need to build two different designs. It is imperative not to mount equipment on module walls, as they need to be accessible for very rapid meteoroid puncture repairs. (The same is true of non-inflatable modules.)

I wrestled with several ideas on how to provide adequate radius at acceptable spin rates for artificial gravity, at the one gee level which we already know would be adequate. The breakthrough was to spin the long ship end-over-end, using the long module stack as its own spin diameter. For the trip to Mars, the propellant stack is 34 modules long, each figured as 5.2 m diameter and 13.9 m long, based on the payload shroud dimensions for the SpaceX Falcon-heavy launch vehicle. Spinning end-over-end at only 1.2 rpm provides right about 1 gee at the forward end of the inflatable habitat (at its lower deck as illustrated). The stack is shorter returning to Earth, but should be long enough to provide close to 1 gee at no more than the acceptable limit of 4 rpm.

The original paper covers solar flare radiation shielding in the command module. This is done by surrounding the flight deck with water and wastewater tanks, plus perhaps a little steel plate. One provides space in there for all 6 crew, and a day or two of supplies to outlast the typical solar storm. This enables critical maneuvers to be flown, no matter what the solar weather, a major flight safety issue.

A little research since then provided credible dose estimates for the cosmic ray background radiation, composed of particles so energetic that ordinary shielding is more-or-less impractical. The dose varies between 22 and 60 REM per year in a steady “drizzle”, depending upon the strength of the solar wind, which tends to deflect some of it. The original radiation dose limits for astronauts was set to 25 REM/year, which was the World War 2-vintage max dose for civilian adults. It has since been revised to 50 REM/year, based on what I can find on the internet. The actual dosage rate only sometimes exceeds the newer limits, and then only by a small amount. Trips to Mars thus appear quite feasible without incurring any immediate health risks from cosmic rays, or even any significant prospect of long-term effects.

The Program As Revised

Changing to SC-NTR backup propulsion puts the artificial gravity and frozen food storage issues into the design mix. This has to be made to work, and they are things we have never before done. Using the baseline GC-NTR propulsion puts that very propulsion into the mix as something we never did do before, excepting some feasibility experiments. Those are the two development items to be worked in parallel, so that one or the other is ready in time to fly. (This is the same basic parallel path development idea that was in the original paper, where the baseline was GC-NTR, and the backup was VASIMR and its power plant.) All the other items are simple design / build / checkout efforts based on known technologies, and that includes the SC-NTR. The high-level program plan is just a bunch of parallel paths, as illustrated in Figure 7.

So, we are looking at somewhere in the vicinity of $53 B to $70 B to send 6 men to Mars to make 16 widely-separated landings all over the planet, in the one trip, with maximum safety and self-rescue capability designed-in at every step, and with all-reusable assets left in space to be refueled and reused by subsequent missions. The whole thing could be done for prices like that, in only 5-10 years, given the right kind of contractor teams, and the right kind of an agency to lead them. That is one incredible amount of “bang for the buck”!

As I said in my original paper, right now we do not have that agency, and only a couple of the right kind of contractors, at best. But, if we fix those lacks, we could really do this. The numbers show it is definitely feasible.

The last time we as a nation embarked on a mission to explore another world (the moon), we had nearly two decades of sustained economic boom, from all the jobs created just to get the mission done. That may not be causal, but it is definitely correlated. Why not do it again? 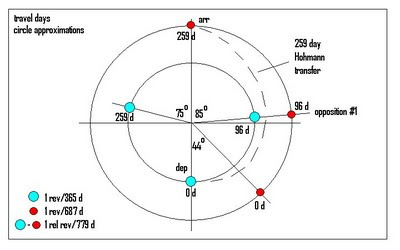 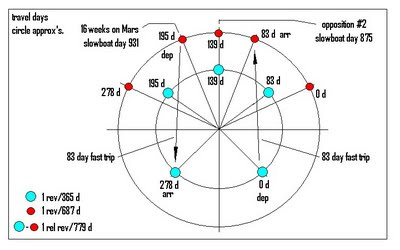 Figure 2 – “Fast Trip” Transfer To and From Mars, Baseline 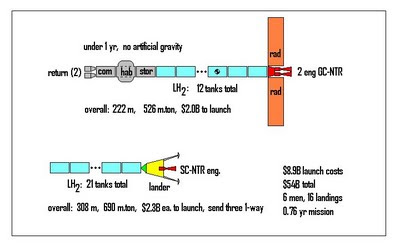 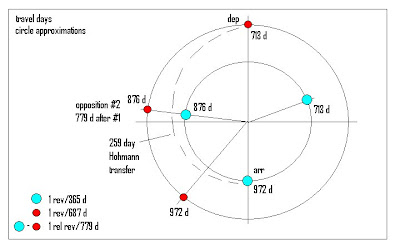 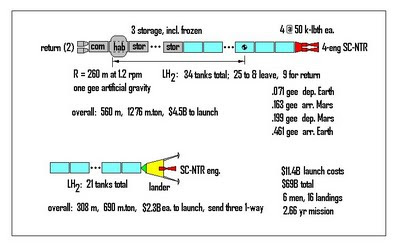 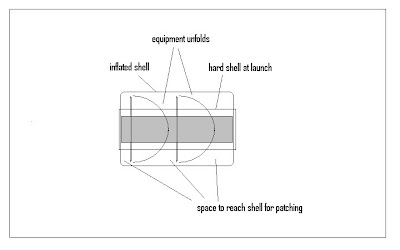 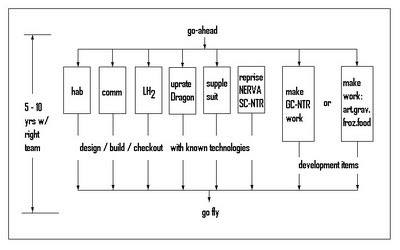