For the first time in a few years, I set up my old electric train in the shop. I got this train as a very young boy, Christmas of 1952. My dad and his next door neighbor built the train board layout in 1954. Some of the items, including two more freight cars, were added between then and about 1960.

The engine and tender is a 4-6-4 coal-fired steam locomotive of the type that was used to pull passenger trains on the old New York Central railway. Lionel called this particular engine 2046, and used it in more than one of their train sets. My original set included a silver tank car, silver box car, black gondola car, and a caboose. The yellow barrel car and the red explosives box car got added later.

The first image shows a good close-up of the engine and tender: 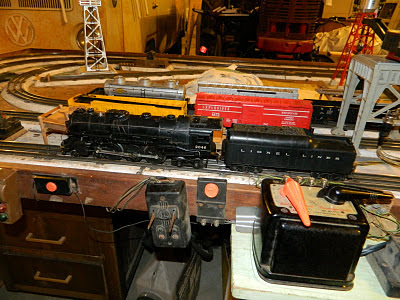 The second image shows the whole train board layout. The inner (third) loop of track is something I added about a decade or so ago. The original setup had two concentric loops connected by 4 switches, all 1954-ish vintage track and switches.

Along the way, the two extra freight cars, the crossing equipment, the water tower, and the beacon got added, as Christmas presents, if I remember correctly. My paternal grandmother gave me the gantry crane, which still works. It rotates, moves up and down, and the electromagnet still picks up iron things.

I put some miscellaneous small toy cars into this set-up. I also built the loading ramps out of scrap wood from an old VW bus wooden headliner. My painted-paper landscape simulation from over 20 years ago has deteriorated past repair. I need to replace it, and add some more hand-made buildings. I'll do it, once I retire. 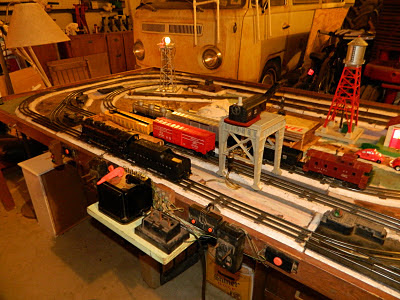 The third image is my finger pointing at the entry in an original 1953 Lionel catalog for the exact set that is my original train: 1505WS, which was $49.95 in 1952-dollars, and still the same price in 1953. My good friend Harry Petersen in Minnesota found that catalog and sent it to me. He, too, is a model railroad enthusiast. 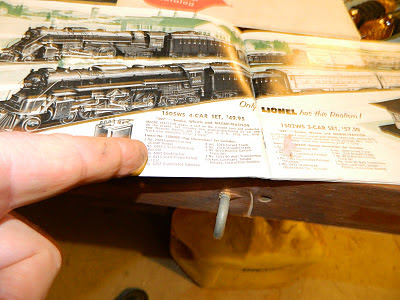 Below I have embedded a video clip taken with my wife's camera of this train running on that train board. It no longer smokes, but the whistle still blows. This thing is 59 years old this year, and it still runs! In spite of all the mistreatment I gave it as a child. Lionel certainly made a good product.

This posting is just for fun. Hope you enjoyed looking at it.