Big Student Pulsejet an Even Larger Hit at TSTC

TSTC welding student Justin Friend, who has just graduated into a job at a nuclear power plant, has built and “tuned-up” his much larger pulsejet engine. I helped him scale it up from some very old documents. My colleague Dr. Wilke helped him figure out how to lay out the conical parts for roll-and-weld fabrication.


Tuning it up was tougher than either of us thought it would be. The “art” of tuning these things disappeared with their makers long ago. We ended up making a resonant fuel injection probe, to which Justin added a surge chamber. Both the inlet and exit required bellmouth structures, and Justin shortened the inlet slightly. Justin’s first, smaller engine was built from plans off the internet for a unit that was already tuned up.


Figure 1 is a photo of Justin and his big engine before he tuned it up. The combustion chamber is nearly 10 inches diameter, and the folded tube is about 8 feet long overall. It does not have any augmentors, at least not yet. You can see the leaf blower with a long delivery tube that he used for starting air. 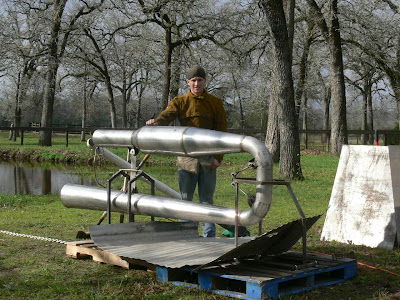 
Figure 2 is a view of the tuned engine at shutdown, taken at the TSTC demonstration test . The fire plume is leftover fuel burning up as the pulsation ceased. The fuel was bottled propane. The demonstration test site was one of the engine static thrust tie-downs on the ramp adjacent to TSTC’s Aviation Maintenance hangar. It was raining during this time. 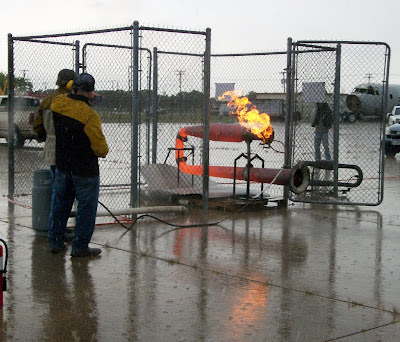 
The demonstration test took place Friday April 20, 2012, at about 9 AM. The “Waco Tribune-Herald” and KWTX-TV were there. I saw a video clip of this test on the 10 PM KWTX-TV news that night.


Considering that the tube shell near the minimum contraction gets as hot as about 1900 F, I’d say that Justin’s weld quality is extraordinary. Please consider that if you offer him a job!

Update: 5-3-12 --- I added the search label "pulsejet" to this article and the two previous articles about this student and his pulsejet hobby. They would be the pulsejet golf cart dated 3-6-12, and the original small-engine demo at TSTC, dated 11-12-11.

I do plan to add a couple of cell phone videos of the big engine burning, to this article, as soon as I can access the source files.

Here are the two video clips.  The first starts after the firing starts.  The second takes you through past shutdown.   Both are short,  from a hand-held cell phone.  If you look carefully,  you can spot the little engine on the apron alongside the test cell.

The roughly 50-Hertz sound is unique,  not having been heard since the last time a big engine was built,  in the late 1950's.  It is also very close to the noise made by its WW-2 cousin,  the V-1 Buzz Bomb engine.