For the best batteries, source = AAAS’s “Science” vol 332 24 June 2011 p 1496. For chemical potential = 100%, there’s actual cell performance at about 50% of potential (the two-way efficiency), and ganged cells in a real battery pack at about 37% of theoretical potential, as a single overall knockdown factor. The generally available ganged-cell knowledge is really for lead-acid, but taken as “typical” for all battery types. I took the potentials in the journal article,  and knocked them all down to "deliverables" with that 37%.

For unpressurized liquid fuels, the estimate of typical actual cruising performance is based on the fuel’s theoretical heat of combustion, and about 15-20% typical overall thermal efficiency (I used 17.5%) for the hydrocarbon liquid fuels in piston engines. This does not take into account the factor 1.15 to 1.2 increase in overall efficiency observed in actual testing with ethanol at gasoline compression ratios (CR). Typically, gasoline (and ethanol) CR 7-11, diesel CR usually 20-22. Ethanol’s top CR may be in the CR 15-22 range. If so, this alone confers roughly a factor 1.5 improvement in efficiency.

I have no figures to offer for gas turbine vs piston as the IC engine component. Yet both are heat engines with similar thermodynamic source and sink temperatures. So,  the overall energy conversion efficiencies should be at least comparable. As crude as the rest of this is, piston vs turbine should not really matter.

The following table lists my best-estimate deliverable energy storage densities, in metric units, as W-hr/kg. The mass unit would be the basic battery material mass or the liquid fuel mass, not a finished production item or tank system. The “feasible now?” refers to development status. A “yes” means it is actually roadable. A “no” refers to laboratory status only. “Perhaps” is in between, but definitely not yet roadable.The added notation "(exper)" means people have actually done this,  but it is not a production item.

A bar chart plot of these selected storage data reveals that batteries alone should be competitive with unpressurized liquid fuels if energy storage densities near 2000 W-hr/kg become roadable.  None are currently available.  Yet two are promising research items:  lithium-air and aluminum-air.  Of these,  since aluminum is more plentiful on the Earth’s surface than lithium,  I’d tentatively recommend that DOE/NREL be looking very hard at aluminum-air batteries.   It appears to be a wise R&D investment choice. 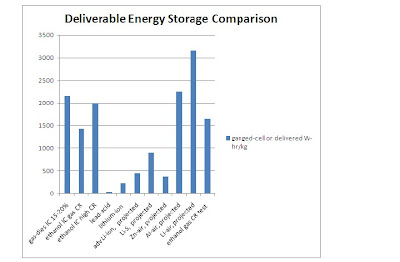 Now,  electric cars need not have a "super-battery" to be effective,  if the series hybrid approach is used (often called a “plug-in hybrid” today).  Most car trips are under roughly 50 miles.  An all-electric drive car need only have that much range to seem quite practical most of the time,  which reduces the battery size and cost considerably (factor 6+ reduction).  For those few trips exceeding battery range,  add a motor-generator set burning liquid fuel,  that is just big enough to keep the battery charged as you drive,  very much like the old-time diesel-electric submarines.  Surges come from the battery,  and get recharged afterward.

This approach allows one to retain all of the electric drive features already sized,  and to use a smaller internal-combustion (IC) component,  while at the same time avoiding a complicated and costly transmission to blend torque from two sources.  These characteristics all act to reduce size,  weight,  and cost,  and are a well-proven technology set long used in submarines and railroad locomotives.  These kinds of equipment have been small enough for road use since the mid-1970's. 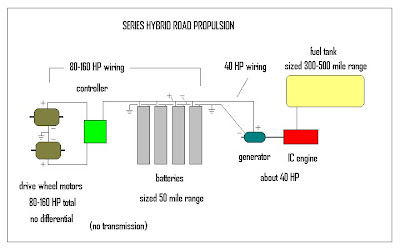 There is no fundamental reason why the IC component has to be a piston engine in a series hybrid.  Constant-speed turbine is a very good match to a constant-speed electric generator,  varying only torque (mixture ratio) to match load.  Gas turbine plants can easily be rigged to use any liquid fuel,  easier than a piston engine.  They are a smaller,  lighter package than an equivalent-power piston engine.  They do require a high-ratio reduction gear,  but,  that technology has existed in turboprop aircraft for 6+ decades.

The easy flex-fuel aspect of a turbine could be very important for a variety of fuel availability reasons.  One not commonly recognized is the intermittency of fuel use in a series hybrid with a 50-mile battery-alone range.   The fuel is likely to sit in the tank for quite a while before it is used.

Gasoline is not stable in storage for more than a few months.  Diesel is,  as is ethanol.  Ethanol–gasoline blends of significant ethanol content seem to be more stable than gasoline alone,  if the ethanol content is around 30-35%.  That’s a very “stiff” gasohol.  Kerosene is also stable in storage.  The turbine doesn’t care,  it could burn any or all of these,  separately or mixed. Diesel and kerosene are easier to refine than gasoline,  and more plentiful from a barrel of oil when refined without cracking.

1. I see no reason to disparage electric cars with batteries available right now for a commute under 50 miles.
2. A competitively long-range all-electric drive car is feasible right now,  if done as a series hybrid.
3. The energy storage "to beat" with future batteries is about 2000 w-hr/kg, as delivered from a ganged-cell battery with realistic in-out efficiencies.