The NASA Glenn Research Center (Glenn RC) has published online a model of the properties of the Martian atmosphere.  It was based on measurements made by the Mars Global Surveyor in 1996.  The basic model comprises a temperature profile with two lapse rates (one below 7 km and the other above 7 km),  and a single exponential fit of pressure versus altitude.  Density is computed from these profiles.

One problem with this model is extending the upper zone lapse rate to very high altitudes.  Above about 115 km,  this model predicts temperatures below absolute zero (0 degrees K,  -273.15 degrees C).   I “corrected” that by limiting the extreme altitude temperatures to a constant 4 degrees K (-269.1 degrees C) as indicated in Figure 1.  But,  I do not believe this profile is anywhere near correct at altitudes around 100 km,  because the temperature profile in the extended ICAO atmosphere model for Earth does not tend to very cold temperatures at very high altitudes.  It actually goes very hot.

UPDATE 6-30-12:  there are far better models to use,  such as MarsGRAM.  Do not use this one!  There is a published paper "Atmospheric Environments for Entry,  Descent,  and Landing (EDL)" by Justus and Braun that has better temperature profiles for Mars and other destinations.  It also has a scale height-based way of approximating density,  and some 1956-vintage back-of-the-envelope entry hypersonics relations.  These are likely within half an order of magnitude of the correct design conditions.  In future postings,  I will elaborate a better "typical model" for the atmosphere of Mars,  and what kinds of vehicles might land large payloads through it.

SECOND UPDATE 9-25-12:  The Justus and Braun atmosphere models (more than just Mars) and 1956-vintage entry hypersonics model,  I have examined,  updated,  and posted as usable "how-to" articles posted just above.  For atmospheres,  see "Atmosphere Models for Earth,  Mars,  and Titan" dated  6-30-12.  For the entry hypersonics models,  see "'Back of the Envelope' Entry Model",  dated 7-14-12.  Those two have what you need,  in all likelihood.

Nevertheless,  using the “corrected” Glenn RC temperature profile and the Glenn RC pressure profile (Figure 2) to a peak altitude of 200 km,  I computed a density profile  vs altitude (Figure 3),  and a speed-of-sound profile (Figure 4).   This speed of sound was based on pure CO2 at a molecular weight of 44.01,  and a specific heat ratio (γ) of 1.300.  It shows ridiculously-low values around 100 km,  precisely because the predicted temperatures are ridiculously low.

It is known from experience on Earth that “re-entry begins” around 90 km altitude.   It is a little difficult to quantify why that might be so.  The density in the ICAO atmosphere at 90 km is about 3.213 x 10-6 kg/m3.   The corresponding mean free path length between air molecules is about 3 cm.  Above 90 km,  the molecular weight departs from 28.966,  reflecting a change in composition.   Aerodynamically,  this is most definitely free molecule flow,  probably best represented by some modified Newtonian flow model.  Accordingly,  I calculated a Newtonian stagnation pressure (Pstag) of 2 mbar at 90 km,  and 7905 m/s velocity,  which is Earth’s surface circular orbit velocity.  Actual entry speeds from real orbits are not much different from that value at all.

I personally have no way to compute mean free path on Mars.   So,  based on either density,  or Newtonian Pstag,  re-entry should start a little higher up on Mars:  somewhere near 120-140 km,  versus about 90 km on Earth.  This value is comparable,  so there is some confidence in this assertion.

In the Glenn RC model for Mars,  that same density occurs at roughly 28 km altitude.   Accordingly,  I would use some sort of Newtonian flow model for altitudes above 28 km,  and the continuum flow model below that altitude.  This choice is also speed-dependent,  however.   In any event,  I am not sure this is a model adequate for predicting hypersonic drag during high-altitude re-entry.  The temperatures “look too low” up there.   The computed Mach numbers will be all wrong.

On the other hand,  for the final supersonics and chute-deployment phases,  somewhere below roughly 28 km altitudes,  this model is probably pretty good. 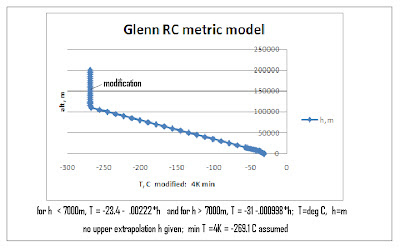 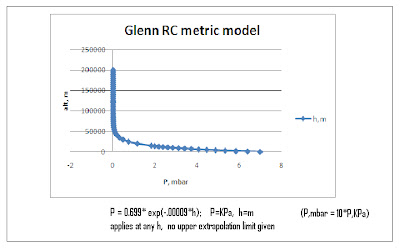 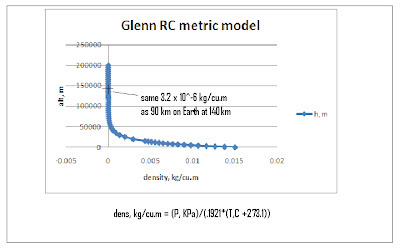 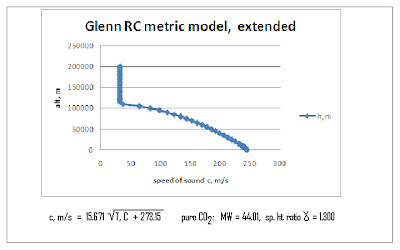 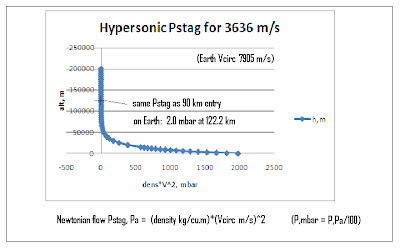