Gravity Data on All the Interesting Worlds

I used the 53rd edition of the CRC Handbook of Chemistry and Physics to compile this data set, because it is in my physical library. This reference dates to its copyright date of 1972. There may exist better data of more recent origin, but this is “pretty good” stuff, as of 1972. See section F of said reference, pages F150-F161.

I used the reference cited above to compile planetary mass and radius data, from which I computed surface gravity and surface escape speeds. These I compared to the tabulated “standard” values, which correlated to about 4 significant figures (see figure 1). This includes the centrifugal force effect at 45 degrees latitude, as best it was known in 1972.

Therefore, as best we knew the mass, radius, and rotation rate data in 1972, these values of surface escape speed and surface circular orbit velocity reported herein, are “good”. See figure 1 for an image of the spreadsheet data. Use the “standard” values in preference to my “calculated” values. More significant digits are implied in those “standard” values. The digits for the universal gravity constant don’t all show in the spreadsheet cell, but they are all there: 6.6732 x 10^-11 N m^2/kg^2, per the cited reference.

UPDATE 2-20-17:  The listed "standard" escape speed (and associated circular orbit speed) data in the old CRC handbook are just wrong for Ganymede and Titan.  Use my calculated values instead.  Edited spreadsheet image also revised to call out incorrect data.

You may scale surface values of escape speed and circular orbit speed to “realistic” altitudes by means of body radius, as given below:

I have yet to work out what “realistic” factors might apply. But, the circular orbit speed at altitude is a good zero-order estimate of the theoretical delta-vee required to reach orbit from that surface. This needs to be factored up by gravity losses of about 1.05 on Earth, and by drag losses of about 1.05 on Earth, for the typical slender, relatively low-drag, vertical launch vehicle. There are also out-of-plane orbit issues to consider. 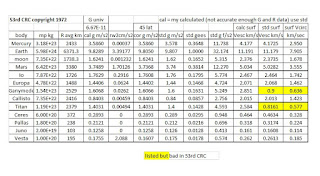