I am not a specialist in this topic (nuclear rocketry), but I am an older, well-experienced aerospace/mechanical engineer, and I am well-read about these things. I have no hard numbers here, but these concepts really do look feasible and fruitful for manned Mars missions (and more).

Using solid-core nuclear rockets as propulsion in anything resembling a safe manner is not a trivial issue, to be sure. I do think the applications of orbit-to-orbit transport, and planetary landing, end up addressing this risk entirely differently.

For the orbit-to-orbit transport, most interestingly a Mars mission, issues of artificial gravity should interact very constructively with the need to provide radiation shielding from your reactor. There is a need to stage-off emptied propellant tanks after every “burn”, but if the design comprises a set of docked modules, it is easy to reconfigure into the same length “slender baton” shape at each stage-off. Spin the “baton” end-over-end for gravity: 56 m radius at 4 rpm is 1 full gee at a tolerable spin rate. (This is true even for chemically-powered designs.) See Figure 1. 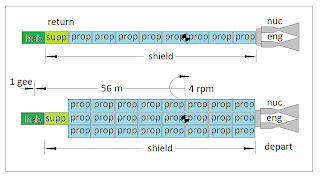 This reconfigurable “slender baton” shape not only maintains radius for artificial gravity at low rpm, it also maintains the much longer distance that is so very necessary for getting shielding benefits out of your remaining propellant tanks. Somewhere around 40 meters of propellant tank fluids and structures should be quite effective at shielding the crew from nuclear radiation, during or between “burns”.

The lander is a vastly different proposition. Compact as it has to be for landing stability, shielding “steady state” by distance with tanks and fluids is impossible. The alternative is tons of lead or concrete, etc, also very undesirable. But since the descent and ascent “burns” are brief (minutes only), there is no need to shield “steady state”. Using what little tankage-and-structures shielding benefit that there is, the crew need only endure brief intense exposures, integrating to a very modest accumulated dose, actually. But this does require that the crew evacuate to a surface shelter remote from the lander during the surface stay. And you keep your distance from these landers in orbit, too, except when in use. See Figure 2. However, the numbers show such landers could fly both descent and ascent on a single fueling, and in a very practical design with significant cargo capability, at Mars. 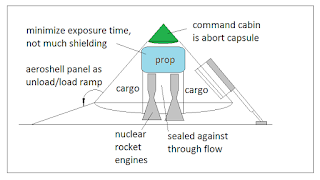 The intensity of the exposures might be mitigated slightly by a shift to thorium reactors instead of uranium. This gets the worst-offender plutonium-239 out of the picture. But, fission leaks neutrons, no matter what, so it remains a very serious risk. I like the thorium approach better than uranium, in part because of the slightly-reduced danger from shut-down cores, but mostly because it is a more plentiful fuel. But, I recognize that we have to start with what we know: uranium.

Dangers of radiation from a contained core after engine shutdown (the worst risk of all) could be mitigated greatly by the open-cycle gas core concept, which is essentially an “empty steel can” between “burns” (see Figure 3). The light-bulb concepts feature a retained core, and suffer the same risks as solid core after engine shutdown. Only induced radioactivity in the engine shell is still a problem, and that is far less intense, and it decays far quicker. That’s why I’m such a fan of developing the open-cycle gas core technology as soon as possible, although we still have to start with what we know, that being a highly-enriched uranium solid core. No one has ever actually yet built and tested an open-cycle gas core engine, however. 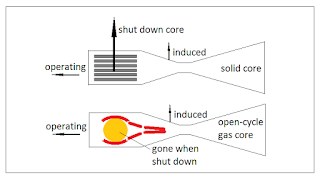 I am also a very big fan of revising the nuclear rocket engine to use water instead of liquid hydrogen as the propellant fluid. I think the better heat-absorbing characteristics of the water may allow higher reactor power levels, thus offsetting in part the loss of specific impulse due to the higher molecular weight. This has never been implemented and tested. The water provides a better radiation shield, and logistically is far easier to handle and store in space. Further, it seems to be very widely available as native ice, at many interesting destinations in the solar system, including Mars.

There are several related articles on this site where I have posted design concepts and estimated performance numbers for “typical” designs, for both the orbit-to-orbit transport, and the landers. The best and most realistic of these articles are listed below, by date, title, and a content summary:

9-6-11 Mars Mission Second Thoughts Illustrated - looks at a revision of the original modular design in my original Mars Society convention paper, one with solid core nuclear/min energy transfer propulsion, instead of gas core/fast trip. Otherwise, the mission scenario and hardware designs are the same as that paper. This is revisited,  and the discussion extended,  in 4-23-12 Update to Mars Mission Design.

7-25-11 Going to Mars (or anywhere else nearby) the posting version – is the posted-here version of my original Mars mission paper at the Mars Society convention in Dallas, Texas, August 2011. The transit vehicle baseline propulsion in that paper was gas core nuclear/fast trip. The reusable solid core nuclear single stage lander performance is outlined very well in that paper. This lander design is very over-conservative, as no credit was given to aerodynamic drag during descent: the descent delta-vee was assumed to be the same as the ascent delta-vee.

7-19-12 Rough-Out Mars Mission with Artificial Gravity – this is the first analysis I ran that deliberately explores the integration of spin-generated artificial gravity into a slow-boat mission by using reconfigurable docked modules to build the orbital transport vehicle. This one assumes the same 60-ton reusable nuclear landers as the original paper, plus solid core nuclear/slowboat propulsion. The landers go with the transport in this analysis. In the original paper, they went separately. But the lander propellant supply still goes separately to Mars in this article. This design uses the 56 m radius figure at 4 rpm to provide 1 full gee of artificial gravity.

6-30-12 Atmosphere Models for Earth, Mars, and Titan – this provides realistic and traceable data for the “typical” Mars entry environment for lander design purposes. (Typical atmospheres for Earth and Titan are also defined.)  I got these data from a posted NASA paper,  cited within.

7-14-12 “Back of the Envelope” Entry Model – this provides a traceable and realistic means of quickly estimating how much velocity reduction can be achieved on descent to Mars (or any other location with an atmosphere), given a ballistic coefficient, a velocity at entry interface, and a descent angle at entry.  I corrected the heat transfer model from a 1956-vintage warhead re-entry calculation that was discussed in the same posted NASA paper.  The dynamics were fine.

Some closely-related discussions are given in two very recent articles:

12-31-12 Mars Landing Options – this one discusses the choices to be made (and their effects on mission design) of in-situ return propellant manufacture versus bringing the ascent propellant with you, and of landing one vehicle at any given site versus landing several close enough together to interact effectively.  Too close is also a bad outcome.

12-31-12 On Long-Term Sustainable Interplanetary Travel – this one discusses the merits of choosing a solid-core nuclear propulsion design revised to use water instead of hydrogen as the propellant fluid. Future developments that might prove beneficial are also explored.