My friend Bob Clark has a good site named “Polymath”.  He has been looking recently at less expensive ways to mount return missions to the moon,  far less expensive than anything NASA has proposed in several years.  Bob’s slogan of late is “Free Your Mind and the Rest Will Follow”.  Here’s my two cents’ worth,  along those same lines.


I freed my mind of two preconceptions:  (1) one mission/one launch,  and (2) brand new technology needs to be developed,  both of which cripple most of the NASA concepts.  I took advantage of on-orbit assembly by docking,  and rendezvous,  both in low Earth orbit (LEO),  and low lunar orbit (LLO).


I also freed my mind of the preconception that the transfer stage needs to be a single-piece item.  Instead,  it can be modular,  with a “service module” of tanks and engine,  plus additional modules that are tanks and interconnect piping.


By using the same engine for the landers and transfer “service modules”,  and the same tank set in the “service modules” and additional propellant modules,  costs can be drastically reduced.  There are two types of transfer vehicles:  the manned craft with a crew return capsule as its payload,  and the unmanned craft that sends landers to the moon one-way.  One could send one or two unmanned lander transfer vehicles with the manned vehicle,  rendezvousing in LLO.


I tried sizing this stuff to fit existing commercial launchers with LOX-RP1 propellant technology,  but the performance was not adequate to do this conveniently.  So,  I sized with LOX-LH2 technology,  but at modest size and modest chamber pressure.  This engine is to be much simpler and less demanding than the very high-pressure space shuttle main engines.  Much of this “service module” hardware would resemble very strongly a variation on the hardware in the current Centaur upper stage.


This is ballpark bounding calculation stuff,  not precision design and performance calculations.  Any real design based on these concepts would be different in detail (and more likely to use real variants of Centaur equipment),  but broadly similar to what I computed here.


The first thing to consider is availability of commercial launchers capable of lofting over 10 metric tons to LEO.  I restricted my view to existing rockets,  or rockets that would be flying within a year or so.  That list is summarized in Figure 1 (below at end of article),  along with launch prices I found on the internet and corrected for inflation.  All the payload and cost data are vintage 2012,  not 2013.  The Falcon-9 shown is the older one,  not the new configuration that launched a few days ago.


I roughed-out some rocket engine ballistics from characteristic velocity (c*) data I found in a 1970-vintage edition of the venerable old Pratt & Whitney “Vest Pocket Handbook”.  Thrust coefficient I read graphically off an old chart for gas specific heat ratio 1.20,  at an arbitrary pressure ratio,  and already corrected for an effective bell half angle loss factor of 0.983.  Those data are given in Figure 2,  and lead immediately to estimates of engine specific impulse and exhaust velocity.     ---  updated 10-4-13 for clarity,  not fact


I see no reason to develop a new crew capsule for this application.  And for a lunar trip,  no habitat module is needed.  There are 3 capsules currently in development:  a manned version of Spacex’s Dragon,  the Boeing CST-100,  and NASA’s Orion.  The one closest to flying is probably Dragon,  since it is already operational as an unmanned cargo carrier.  So I went with manned Dragon,  which should fly for NASA by 2017,  and could probably really fly as early as 2014 or 2015.


The lander need not be very large.  The old Apollo LM was about 15 tons.  NASA had proposed a new 45 ton lander named Altair,  for its cancelled Constellation lunar program.  We have learned a lot since Apollo about constructing landers,  and they need not be staged,  although that can reduce lander ignition weight.   A one-stage design is potentially reusable,  although I did not require reusability here.  I just picked two arbitrary weights:  20 and 30 metric tons.


These considerations lead to a set of modules to be built,  proof-tested,  shaken-down in tests,  and then produced for the mission.  Note that there is nothing in the way of new technology here.  This is just hardware designed with already-existing technologies.  The necessary modules are shown in Figure 3,  with the lander still a rough concept.


One can string together a service module,  a propellant module,  and a manned Dragon together as the manned transfer vehicle from LEO to LLO,  and back with free return.  This is shown in Figure 4.  This does not even require assembly by docking in LEO,  since one Falcon-Heavy has more than enough capability to orbit this entire vehicle as its payload.


If one designs to a 20 ton lander,  the unmanned one-way lander transfer vehicle should look about as depicted in Figure 5.  This is a second service module,  two propellant modules,  and the lander itself,  totaling about 59 metric tons.  You could launch this into LEO in two shots,  either one Falcon-Heavy and one Atlas-V/Delta-IV/Proton,  or two Falcon-Heavies.  Then dock them and make connections.


If instead one designs to a 30-ton lander,  the unmanned transfer vehicle would look about as depicted in Figure 6.  This is a service module,  three propellant modules,  and the bigger lander,  totally about 82 tons in LEO.  This would require on-orbit docking and connections of payloads sent up by two Falcon-Heavies.


In Figure 7,  I have summarized the performance of both the 20 ton and 30 ton landers,  in two modes.  These are a two-way trip manned,  and a one way trip unmanned as nothing but a cargo delivery vehicle.  I worked out what the total payload could be,  for both sizes and both modes,  a total of four cases.


I also worked out a guess for the weight of 7 crew with two weeks’ supplies.  The difference is the cargo in addition to the crew.  For the two-way manned mission,  the same cargo allowance coming down can be carried going back up.  For the one-way unmanned mission,  the entire payload can be cargo ferried down.  Given one manned and two unmanned vehicles,  it is possible to send several tons of cargo down with a big crew.


As already discussed,  this is not a “gravy-train” new-technology development project.  Those rarely produce anything that actually flies.  A summary of what is needed is given in Figure 8,  along with a wild guess for how much it might cost,  if done by the “right team”.  I didn’t consider production costs for the various modules,  but at several million dollars each,  they would be “small change” compared to the uncertainties in the rest of this.


These figures are very crude,  but the point is,  a big crew and a lot of cargo can be sent to the moon for a price that is a lot closer to 1 or 2 billion dollars than it is to 10-50 billion dollars.


That makes possible the start of a permanent lunar base of some kind!  And for a lot less money than most folks would believe!


This same kind of thinking,  free of crippling preconceptions,  is what must take place to design an affordable manned Mars mission,  or any other deep-space mission.


It’s just that flying into deep space is a lot different from flying to the moon,  because of the travel times. 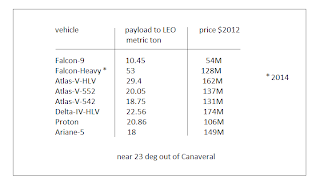 Figure 1 – Commercial Launchers Existing Now or by 2014, 10+ Tons to LEO-Capable 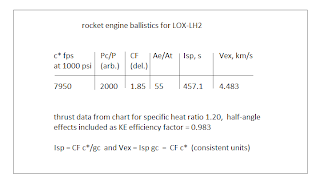 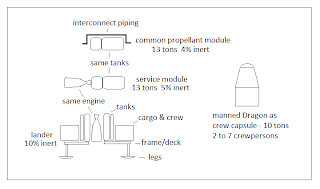 Figure 3 – Modules Needed, with Maximum Commonality of Tanks and Engines 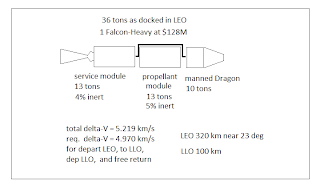 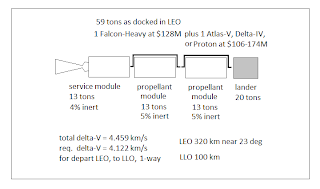 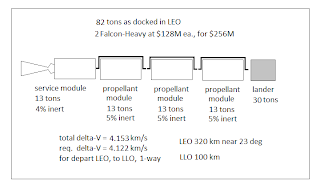 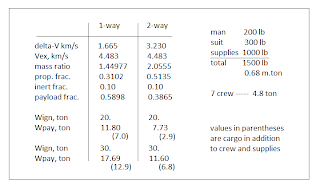 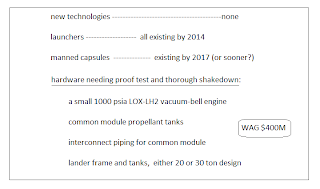 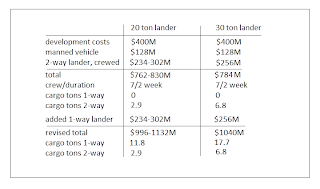 Figure 9 – Summary of Mission Costs and Returns, Versus Options

Updated 10-4-13:  if the common engine is in fact at least semi-reusable (meaning capable of a few dozen ignitions and burns),  there is no reason the lander engines cannot push propellant modules to the moon,  without a service module at all.  Initially,  I failed to free my mind enough to notice this.

This option opens up the possibility of operating the lunar lander more than once,  as a ferry or landing boat,  given an on-orbit refueling capability from tanks.  A fourth and subsequent shot could send a service module and tanks plus payload-to-be-landed one way to the moon for LLO refueling.