This article documents the results of a back-of-the-envelope sizing study similar to that of reference 1.  The differences are (1) horizontal takeoff,  and (2) the orbital vehicle is a small rocket spaceplane instead of a minimal space capsule.  For this study,  the ultimate payload of the spaceplane is a pilot and two passengers,  all spacesuited with about a day’s life support supplies,  plus about 100 pounds (each) of luggage for the two passengers.

The study in reference 1 emphasized the necessity of strict frontal area proportioning to enable hypersonic flight with ramjet propulsion in a cluster vehicle.  For this study I assumed ramjet takeover to be Mach 1.5,  and the staging speed to be Mach 5,  again at 60,000 feet (18.3 km).  All rocket propulsion was assumed to be LOX-liquid methane (LCH4),  and I used some ramjet performance data calculated for RJ-5 synthetic (kerosene-like) fuel,  although the design intent here is that the ramjet use LCH4 as its fuel.

Past attempts at a design like this proved too difficult to believe success was possible,  based on a simple two-stage airplane concept.  In that concept,  the second stage was rocket-only,  and the first stage was assumed to be rocket plus ramjet in a convenient parallel-burn configuration.  The wing and rocket takeoff hardware always proved too draggy and too heavy.  Even with a staging velocity of M6 at 60,000 feet,  the velocity increment to orbit was too demanding for anything but LOX-LH2 propulsion in the second stage.  By changing those basic concepts,  to something seemingly a little more complicated,  I was able to use LOX-LCH4 in all items,  with very conservative inert fractions that support reusability.

That approach then required a rocket booster stage to take the spaceplane from ramjet staging conditions to the spaceplane engine ignition point.  Because this combination starts off in hypersonic atmospheric flight,  I chose a serial stage integration with the same body diameter as the spaceplane.  That keeps the stack’s hypersonic drag to a minimum,  making it very more likely that the ramjet propulsion strap-ons can push this “payload” to at least Mach 5.  That stage point is shown in figure 1 as Mach 5 at 60,000 feet (1.48 km/s at 18.3 km).  Weights are given in figure 2.

Details of the booster stage are given in figure 4.  This item includes a guidance and control package and an ablative entry heat shield up forward,  and a recovery chute package aft,  for ocean splashdown recovery,  as indicated in figures 1 and 4.

Both the booster stage and the spaceplane are presumed to be propelled with 1000 psia chamber LOX-LCH4 engines with exit bells sized for perfect expansion at the backpressure extant at 60,000 feet.  I used a standard chart to determine expansion ratio and optimum thrust coefficient,  assuming the gas specific heat ratio was 1.2,  and which chart includes the nozzle kinetic energy efficiency associated with an average 15-degree half angle in the bell.  Reference 2 suggests a chamber c*=6120 ft/s for 1000 psia with LOX-LCH4.

Both of these phases were analyzed with the simple rocket equation,  with the actual velocity change ratioed-up by factor 1.10 to “account” empirically for gravity and drag losses.  The spaceplane is a hypersonic glider for re-entry,  with a heat shield that is part refractory,  part ablative,  and lands as a dead-stick glider.  I sized its wing for a 90 KCAS (knots calibrated air speed) landing speed without high-lift devices,  factor 1.2 away from it estimated stall speed (as in aircraft design practice).    This is crude,  but “ballpark correct”.

To reach the ramjet staging point from ramjet takeover (see again figure 1),  I decided to use ramjet strap-on pods similar to those in reference 1,  and shown here in figure 5.  The RJ-5 performance figures I used would be conservative representations of performance fueled by LCH4,  by a few-to-several percent.  I averaged ramjet Isp (predicted from RJ-5) and did a rocket-equation estimate,  where the velocity increment was factored up by (I hope) a conservative value of 1.5.  This is a very rough estimate at best,  but it produced similar values to those I got for the rather similar pod design in reference 1.  So,  it should be “in the ballpark”.  Weights are in figure 2.  By themselves,  the pods are 50% fuel and 50% inerts.  There is plenty of inert margin to cover the recovery gear,  and the robustness for reusability.

I used LCH4 density to size out the required ramjet fuel tank volume,  annular to the inlet duct as shown in figure 5.  This pod has the same translating-spike supersonic inlet that maintains shock-on-lip from Mach 1.5 takeover to staging at Mach 5.  These pods are mounted on each side of the payload core for supersonic body lift,  and sized for a tiny thrust margin over cluster drag at Mach 5.  I used the same circumferential fin stowage idea as in reference 1.

The cluster configuration with the ramjet pods must fly hypersonically,  the same situation as in the reference 1 study.  Exposed fins have been minimized to reduce drag so that the ramjets can reach the desired speed.  The real problem is hypersonic aeroheating,  most especially the extreme localized heating from shock wave impingement upon adjacent structures,  which is inherent in cluster vehicle designs.  The choice of Mach 5 or 6 makes little difference,  both are extreme conditions.  There will need to be tough ablative replaceable panels located in the impingement zones,  to act as sacrificial protection against the damage the shock waves will do otherwise.

I also used the same biplane swivel-stowed wing idea as in reference 1,  so that these pods can return to launch site and land,  as indicated in figure 1.    Pods like this have very little power-on drag,  that being only skin friction plus some cowl lip pressure drag.  That is how a cluster vehicle can be pushed to Mach 5 or 6,  even in the thinner air at 60,000 feet.  The key is cutting payload core drag to a minimum,  and then sizing ramjet pod diameters large enough to push it to the speed needed.  Pod landing speed is under 100 KCAS,  without any high-lift devices.

These strap-on ramjet pods have ejectable booster nozzles,  but no solid-propellant integral boosters,  unlike those in reference 1,  otherwise the basic design approach is identical.  The idea here was to use the ramjet chambers as the takeoff liquid-propellant rocket booster engines,  on the theory that the ejectable nozzles at a (guessed) 100 lb each would be lighter than yet another set of rocket engines of rather large thrust for fast takeoff and climb acceleration.

Thus,  the takeoff "rocket" booster need only be a large wing and propellant tankage,  plus landing gear and a small fanjet engine to help it return to launch site for landing.  This is the very first flight segment shown in figure 1.  The takeoff booster package is shown in figure 6.  It has a delta wing big enough for under-100 KCAS landing without high-lift devices,  yet with a leading edge sweep for min drag at Mach 1.5,  even with a subsonic wing airfoil section.

This configuration has a practical takeoff speed at full gross weight of about 200 KCAS (which sized the wing area),  similar to a very high-performance fighter.  But,  it would be way too draggy to fly under anything but massive rocket thrust,  at speeds above Mach 1.5.  That’s why I staged-off both the wing and the boost propellant at ramjet takeover,  and then made them into a single component for easier recovery.

This takeoff booster is positioned underneath the rocket core and ramjet strap-ons,  as indicated in figure 2,  such that centers of gravity and pressure match up longitudinally.  The wing is high-mounted,  with a low-mounted horizontal tail that has twin vertical fins.    The takeoff booster propellant is in the fuselage,  and is pumped up to the ramjet strap-on pods,  where it is burned at high thrust.  Ejectable nozzles are sized for optimal sea-level expansion from 1000 psia.  Note from figure 6 the lower Isp than that for the near-vacuum engines in the spaceplane (figure 3) and booster rocket stage (figure 4).

This takeoff booster turns after staging off,  decelerating subsonic,  and travels back to landing at the launch point by means of a small fanjet inside the tail cone,  “with a big flush inlet” not sized here.  That fanjet could burn LCH4 residuals,  but it is probably just as easy to include some jet fuel for this.

The takeoff cluster is rather draggy,  so I used factor 1.5 as a (hopefully) conservative way to address the velocity increment indicated from the trajectory.  This went into a simple rocket equation estimate for mass ratio.  Weights are in figure 2.  The takeoff booster by itself is 60% propellants and 40% inerts,  not too unlike transport and bomber aircraft.

These are “ballpark” results only,  and provide only a “realistic” startpoint for more traceable back-of-the-envelope estimating methods,  which would in turn be the startpoint for trajectory-code models.

Payload fractions for the delivered persons and luggage,  and for the dry-tank spaceplane,  are also shown in figure 2.  These are remarkably good,  considering that every component is intended to be high-lifetime reusable.

Ramjet assist evidently “bought” the weight allowances necessary for reusability,  at no increase in launch weight,  looking at the spaceplane-as-payload 3.72% of launch weight case.

I did not adjust the weight statements for the ejecta lost as ramjet takeover obtains (maybe 500-600 lb covering eject nozzles and frangible-glass port covers).  At this level of analysis,  those are “lost in the uncertainty”.

I did not include any propellant allowance for deorbiting the spaceplane.  That actually could be done with attitude thrusters or a small solid propellant cartridge.  The size of those items is “lost in the uncertainty” at this level of analysis.

I did not include any means in the spaceplane for go-around at landing,  or cross-range maneuvering during descent.  That is a serious safety and practicality lack,  and is probably a small but significant item at this level of analysis.

These components are actually too slender,  an artifact of the assumed minimal credible diameter of 5 feet assumed for the spaceplane fuselage.  That diameter is consistent with serial seating of the 3 occupants.  Making that diameter larger would result in more realistic length/diameter ratios for all of the components. 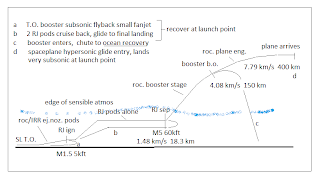 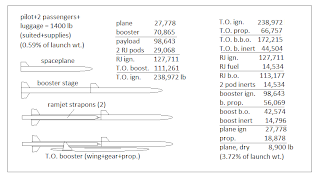 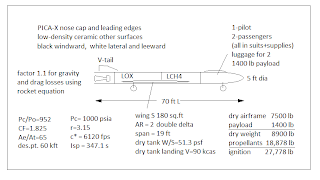 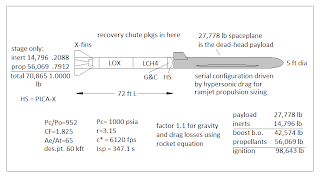 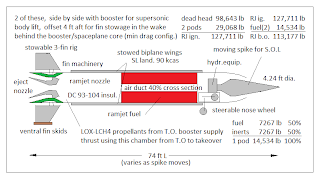 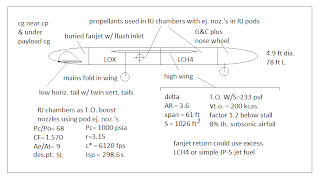