So,  yet another group is looking at a high-speed rail system,  this time for Texas and Oklahoma as a region.  I like the basic idea,  but I do not like any of the proposals I have seen,  not since passenger train service mostly went away decades ago.

And here’s the real “rub”:  none of these proposals has ever effectively addressed how to get people out of their cars and onto the train for intercity travel!  Just shooting from the hip,  I can tell you that a ticket price 80% that of the equivalent airline ticket will not do that trick.

The real rail system (that we actually do need!) should maximize use of existing assets to reduce cost,  and effectively address the “draw” that will get folks out of their cars on the interstates.  As it turns out,  there are pre-existing concepts for both of these very serious issues,  I just have never seen them proposed.

The allure of using existing assets is quite obvious:  to avoid spending 10’s of billions of dollars for this.  What we already have today is 80 mph capable,  for that is the typical cruise speed of an Amtrak train between stops in Texas.

Improve track maintenance but slightly,  and you could raise that to 100 mph capable,  just as it was decades ago for steam express trains.  There’s just not a lot of expense involved to upgrade or adapt existing equipment for 100+ mph speeds,  not compared to the 10’s of billions of dollars for “all new everything”.

The “Draw” Out of the Cars

The fundamental problem has been to get people out of their cars on the interstates,  because personal auto travel is just so bloody convenient.  Why?  Because the car expense doesn’t change when you get to destination (no rental required).

If you have to rent a car at destination,  then there is no effective difference between train travel and air travel.   Air travel with car rental is such a royal pain in the rear that people simply prefer to drive hundreds of miles to avoid the hassle.

In the process,  we waste millions of barrels of oil,  because mass transit is just far more efficient than cars.  People trying to address this with their mass transit plans always forget that the hassle factor has a high price to the passenger,  just like the oil.

So,  why not do a sort of mixed freight and passenger train,  where a part of the freight is the cars of the passengers?  It’s a drive on,  get out and spend the trip in the dining car,  and then drive off without rental hassle when you get there.  This sort of thing has already been shown to work on the East Coast and in Europe!

Doing It A Bit Differently

So,  my proposal would be threefold:  (1) upgrade track maintenance to support 100 mph travel,  (2) upgrade or adapt engines and rolling stock for 100 mph travel,  and (3) put together trains that are mixed freight and passenger as well as the all-freight trains we already have.

Just run everything nearer 100 mph than the current 70 mph freight,  to relieve scheduling problems.  The passenger-carrying portion could be added to any mixed freight.  Just add the dining car and some flat cars with the autos chained down on them.  Simple as that.

That way,  auto load/unload times need not impact the time of the station stop.  You can just keep the same dining car,  with passengers coming and going as the stops are made.  Do the auto load/unload operations on a siding,  before/after the train stop. 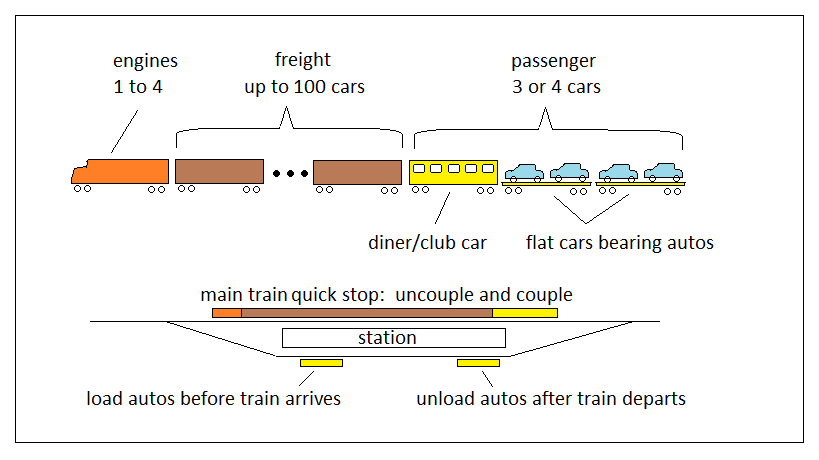 Why This Will Work

Trains are so much more efficient than any imaginable road vehicle that we would still save lots of fuel,  even hauling passengers’ autos on the train.  The passenger has a car at destination without a rental hassle.  And travel times at 100 mph are still shorter than anything achievable on the interstates,  even with a 75 mph speed limit.

Folks that’s a win-win situation for everybody.  All it takes to “solve” this is reusing existing assets in a slightly-different way that addresses attractiveness of mass transit.

Longer term,  we can look at what it would take to use those same existing assets at 120 mph.  Maybe even 130 mph.  But,  the 200 mph that requires “all-new everything” is just not necessary.

I rode the Amtrak from McGregor to Chicago a few years ago.  I timed the speed at near-80 mph between stops in Texas,  and near-90 mph in Illinois.  But in Arkansas and Missouri,  we had to crawl at no more than 20-30 mph,  because the track was in such poor shape.

This state-by-state variation in track maintenance is what could be fixed by a federal standard for all lines to be used for high-speed passenger service.  As for correcting the problems,  there’s a shovel-ready infrastructure project,  if ever there was one.

What I Saw in Japan

Last year my family went to Japan to visit friends and relatives.  The whole time we were there,  we used narrow-gauge light rail for almost all shorter trips,  and full-gauge rail for longer-range intercity travel.  It was really convenient.

All of these traveled faster than the corresponding auto traffic on the freeway system,  so people used them preferentially.  The same would be true here,  which is why 100+mph is “good enough”.

Email ThisBlogThis!Share to TwitterShare to FacebookShare to Pinterest
Labels: trains