Evaluation of Choices for 2016 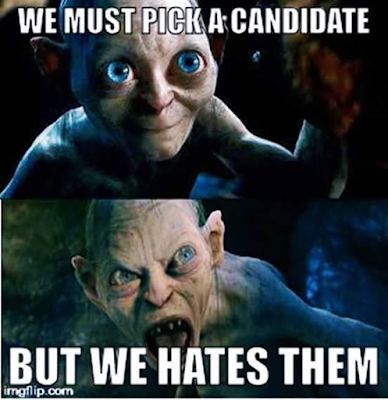 I have been voicing opinions for some months now regarding the 2016 election.  There are some related articles elsewhere on this site,  one of which seems to be modestly popular with readers (the 7-29-16 article).  Another one is just a funny (the 4-24-16 article).  All share the search keyword “idiocy in politics”.  Here’s the list:

Those of you who know me are aware that I have often said this:  I haven’t been voting “for” anybody for president in a great many years,  I have been voting “against” the ones I consider to be greater evils.  And that’s true “in spades” for 2016.

Long ago,  I learned how to use the “trade matrix” as an analysis tool for making hard choices.  I’ve done it again:  evaluating Clinton vs Trump.  This did not extend to the third/fourth party candidates.

The Libertarians have some really odd policy proposals,  to my way of thinking,  claiming to be socially more liberal than the Democrats,  but economically more conservative than the Republicans.  They want to dismantle too many institutions that we actually need.

The Greens are led by an anti-vacciner,  in spite of all the science discrediting her notions.  That’s entirely too crackpot to believe.

So,  it’s just the Democrats vs the Republicans.

What I did was phrase a bunch of items,  all as negative statements.  A ”yes” means the negative applies to the candidate,  color-coded coded red.  Otherwise,  it does not apply,  color-coded blue.  I did not rank how severely a negative applies,  only that it applies at all.  The only thing I did with the data was to re-order the items,  so that the color coding is much clearer.  The rationale for assigning "yes" vs "no" is given further below,  for those who love details.  Here is the trade study matrix data: 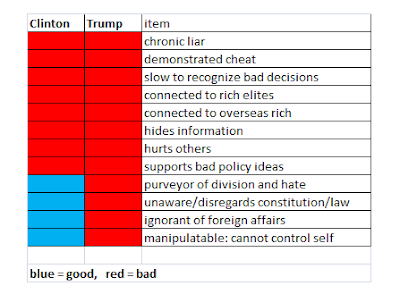 Quite frankly,  there are two conclusions to draw from this pattern of data:  (1) both candidates are “evil” (severely flawed) as indicated by majority red,  and (2),  Trump is the greater evil,  having no blue at all.  I will be voting for the lesser evil (Clinton),  and encourage all of you to do the same.  My best estimate is that Trump,  the greater evil,  would cause chaos-at-the-very-minimum,  if elected.

Estimates of the Political Landscape

My best guess is that we are seeing the destruction of the Republican party as we have known it.  It hasn’t been the “party of Lincoln” since the coalition of religious and political extremists gained control of it back in Reagan’s time.  This got worse a few years ago with the national Tea Party extremists,  who do not govern,  only obstruct.  And now there is Trump,  whose supporters overwhelmed all the rest in the primary just concluded.

We actually do need a “party of Lincoln”.  I can do without the rest.

All the time this was happening,  the Democrats morphed into a very centrist party,  with few of the “flaming liberals” that they used to have in spades.  Not all these flaming liberals were bad:  I rather thought well of Hubert Humphrey,  for one.  This year,  there is a leftward lurch to some small extent,  brought about by Bernie Sanders and his supporters. Actually,  that’s a good thing,  we do not need two conservative parties.  Sameness begets no new ideas in debate.

If it were not so pathetic,  this next would actually be funny:  the Trump and Sanders supporters are largely working class / middle class folks left behind by both parties for about 60 years now.  They do not share politics,  but they share a common problem with a common solution:  end the giant corporate welfare state that has replaced our republic.  There’s enough of them together to vote in the changes needed,  but they will not get together,  because of the irrelevant party politics.  Sad.

Both parties have favored the rich giants with tax breaks and government contract money,  to the extent that these left-behind folks are worse off now than they have ever been in history.  And it’s getting even worse:  the rest of the middle class is now also facing destruction.  That’ll be the end of our country,  because that’s where most of the tax money comes from.

The giants know this,  but persist in taking all the loot anyway,  because greed overwhelms all common sense.  And that is why we are headed to hell in a handbasket.  So many agree with me,  but cannot say why,  really.

But  I just told you exactly why.

Explanation of Items (the promised details)

According to the fact checkers I can find on-line,  at least about 70% of what DJT says at any given time is untrue.  Some claim near 100%.  Around 30% of what HRC says is untrue,  same sources.  My trade study does not rank more vs less lies,  only that there are lies.

The DNC has been found out to have favored Clinton over Sanders.  I infer that HRC knew this was going on,  and said nothing,  which qualifies as cheating.  DJT used bankruptcies 6 times to “take the money and run”,  stiffing his investors,  his vendors,  and his contractors.  While legal,  most Americans would consider that cheating (abuse of the bankruptcy process for personal gain).  Severity and number of incidents do not factor into my trade study,  only that cheating occurred.

Clinton:  support for a trumped-up Iraq invasion,  still not recognized as incorrect;  and telling lies / obstructing the investigation about the Benghazi embassy disaster.  Trump:  chronic use of bankruptcy laws to enrich himself not recognized as morally repugnant for an elected officeholder,  chronic lying not recognized as wrong in any venue, mishandled campaign not recognized as a whole series of bad decisions,  which are destroying the Republican party.

Clinton:  politically connected closely to the giant corporations as election funding sources,  same ones who have taken over our government;  she is intimately connected to the immensely powerful Clinton Foundation business enterprise.  Trump:  connected to the rich business community by being part of it.  This is a bad thing because those elites have taken over our government.  Being connected implies the status quo (giant corporate welfare state) will be supported.

Clinton:  Clinton Foundation receives large amounts of money from foreign contributors.  Trump:  has connections to Russian elites who have invested heavily in him,  who are a Russian version of organized crime.  These issues inherently affect foreign policy.

Clinton:  long history – Whitewater,  Vince Foster,  Benghazi,  and the unsecured classified emails are the most infamous.  Trump:  will not release tax returns like all other politicians (presumably because they would show he pays no taxes,  and also that he is financially connected to the Russians).  These issues inherently affect foreign and domestic policy,  and undermine credibility.  The relative egregiousness did not figure in to the evaluation,  only that any information was improperly hidden at all.

Clinton:  Whitewater was a real estate scam that bilked oldsters out of their savings,  Vince Foster died,  inattention to embassy security got 4 killed in Benghazi,  and she voted for the trumped-up Iraq war that got hundreds of thousands killed for no useful purpose.  Trump:  6 documented bankruptcies that enriched him at the expense of his creditors,  completely stiffed many vendors and contractors,  and sold worthless degrees for lots of money via Trump University.  The relative egregiousness did not figure in,  only that other people got hurt at all.

Clinton:  supports unworkable ideas for more gun control at a time when the public needs to be better armed to retake their country from the giant corporations,  free/cheap college ideas not well thought-out and probably have side effects worse than what is to be “fixed”.  Trump (to the extent that he has any policy ideas at all):  completely unworkable ideas for border control (wall to be paid for by Mexico,  when cheap ladders and shovels easily defeat a very expensive wall),  and immigration security (denying all Muslim immigrants entry is both illegal and immoral).

Purveyor of Division and Hate

Trump says all Hispanic immigrants are rapists and criminals,  says all Muslim immigrants are terrorists.  Has chronically made atrocious and denigrating remarks about political rivals.  Encourages supporters to get violent with opposition at his rallies,  sometimes directly.  Clinton at least talks inclusive.

Trump wants to temporarily (?) ban Muslim and Mexican immigration in violation of the equal protection guarantees of the Constitution.  He wants to do this with or without Congress,  in violation of the separation of powers in the Constitution.  He wants to abrogate the NATO treaty collective protection if the nation involved hasn’t paid enough.  Clinton has said nothing like those things.

Trump chronically says egregiously incorrect things,  such as:  Russia isn’t in Ukraine,  Crimea wants to be in Russia,  and many more.  Clinton lied by omission,  not about the facts,  with regard to Benghazi.

Trump is a verbal counterpuncher,  and quite evidently cannot not respond.  If Putin crosses him (and he will,  because that’s his nature),  Trump will respond,  and if commander-in-chief,  could order a nuclear attack.  Putin will manipulate him by this mechanism to bog us down in more foreign wars that we don’t need to fight.  Clinton may be a shyster lawyer and a bitch,  but she isn’t manipulatable in that way by our enemies.