Update 4-17-18:  since writing this article,  I have gone to the Spacex website,  where the 2017 presentation materials and more are posted about this design.  I have re-visited my reverse-engineering of the capabilities of this vehicle in greater detail with greater fidelity to reality,  in all its complexity.  I have posted that new,  improved analysis as "Reverse-Engineering the 2017 Version of the Spacex BFR", dated 4-17-2018. I do recommend that readers use that newer analysis article, rather than this one.

The “giant Mars rocket” proposed by Spacex has reduced in size somewhat since its first reveal at the Guadalajara meeting.  The term “BFR” is now beginning to refer to the first stage of the two-stage system,  which flies back and lands for reuse.  The term “ITS” more properly applies to the reusable second stage,  which apparently has two forms.  Those are the cargo/passenger craft that goes to destination after refilling on-orbit,  and a flyback tanker that provides the refill propellants on-orbit. 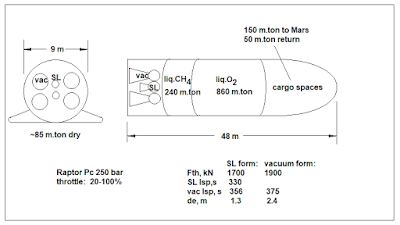 Figure 1 --  Estimated Characteristics of ITS Per 2017 Revelations


These two versions presumably share the same ascent propellant tankage and engine cluster.  Those engines include both sea level and vacuum expansion forms of the same Raptor engine,  with a nominal chamber pressure of 250 bar,  and deeply-throttleable to 20% thrust.  The cluster has 4 vacuum engines of 1900 kN thrust each at 375 sec vacuum specific impulse,  and two sea level engines of 1700 kN thrust each,  and specific impulses of 356 sec in vacuum and 330 sec at sea level.  Exit diameters are 1.3 m and 2.4 m for the sea level and vacuum forms,  respectively.  (I did not correct sea level thrust to vacuum.)

I am presuming here that second stage operation during launches to Earth orbit takes place in vacuum,  so I use the vacuum thrust data for both versions of the engine.  Each type’s thrust is therefore associated with a propellant flow rate via its specific impulse.  Summing these gets a total full thrust and a total propellant flow,  and thus an effective “average” vacuum specific impulse with all six engines running,  for an effective exhaust velocity of about 3.5762 km/sec.  That calculation summarizes as follows,  where effective cluster specific impulse is total thrust divided by total flow rate (Figure 2).

Now,  on the assumption that both forms of the vehicle have the same ascent propellant tanks and quantities (totaling 1100 metric tons of propellants),  the following weight statement and delta-vee table applies (Figure 3).  For the tanker,  the first-listed payload of 150 tons is assumed from the cargo passenger version.  The second is back-calculated from holding tanker delta-vee capability to be the same as the heavier ascent form of the cargo/passenger vehicle.

To do that,  one finds the required mass ratio from the delta-vee,  then solves the mass ratio build-up for the unknown payload: 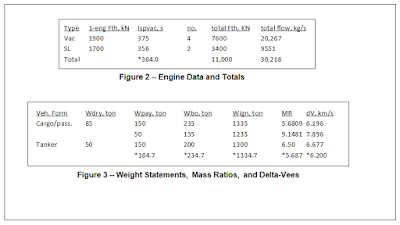 What I find very interesting here is that Spacex seems to have said it takes 6 tankers to fully refill an ITS on orbit for its voyage to destination.  If you look at the heavier tanker that gets the same 6.2 km/sec delta-vee as the fully-loaded cargo/passenger form,  then 1100 metric tons of propellant divided by an estimated 184.7 metric tons per tanker equals 5.956 (almost exactly 6) tankers required.  So the tanker at 50 tons dry weight seems to hold 1100 tons of ascent propellant,  and just about 185 more tons of propellant-as-payload with which to refill a cargo/passenger ITS on orbit.  It would appear this estimate is then just about right.  It does presume all 6 engines running all of the time.

For a trip to Mars from low Earth orbit,  the departure delta-vee for a Hohmann minimum-energy orbit to Mars is around 3.71 km/sec at average orbital conditions.  For a direct entry without stopping in Mars orbit,  you let the planet hit you from behind,  as the planet’s orbital velocity is faster than the transfer orbit’s aphelion speed.  Velocity at entry interface will fall in the 6 km/sec range,  and aerodynamic drag kills most of that to about 0.7 km/s coming out of hypersonics fairly deep in the Martian atmosphere.  Double or triple that for the landing burn:  about 1.5-to-2 km/sec delta-vee requirement.

That’s crudely 5.21 to 5.71 km/sec delta-vee required to make a direct landing on Mars,  with just almost 6.2 km/sec available.  The difference can be used to fly a somewhat higher-energy transfer orbit,  for a shorter flight time than 8 months.  Faster is possible if payload is reduced.

To return,  the ITS is refilled with in-situ propellant production on Mars.  It will need around 6 km/sec delta-vee capability to launch and escape directly,  with enough energy to achieve the return transfer orbit.  We assume a direct entry at Earth,  which means in turn we run into the planet from behind,  since vehicle perihelion velocity is higher than Earth’s orbital velocity.

It will be a very demanding entry interface speed (well above 11 km/sec):  this is what stresses the heat shield,  not entry at Mars.  But,  the vehicle will come out of hypersonics at about the same 0.7 km/sec moderately high in the atmosphere.  It will need at least 3 times that as the landing burn delta vee requirement,  because the altitude is higher,  and the gravity is stronger.  Call it 2 km/sec as a “nice round number” to assume.

The total delta-vee requirement to ascend from Mar’s surface and achieve a direct transfer orbit and a powered landing on Earth is therefore in the neighborhood of 8 km/sec.  That is just about what the ITS cargo/passenger version seems capable of,  if restricted to about 50 metric tons return payload.  Again,  that particular payload correspondence lends confidence to these otherwise-guessed numbers.

It also points out how critical in-situ propellant production will be for using this vehicle on Mars.  Unless this vehicle is refilled locally with the full 1100 metric ton propellant load,  it is stranded there!  Each launch from Mars requires 240 metric tons of locally-produced liquid methane,  and 860 metric tons of locally-produced liquid oxygen.  Launch opportunities are 26 months apart.  Required production rates are thus 9.23 tons/month methane,  and 33.08 tons/month oxygen,  at a bare minimum,  per launch.

Some have pointed out that this vehicle could also visit the moon.  To leave Earth orbit for the moon,  the delta-vee requirement about 3.29 km/sec.  The delta-vee to arrive into low lunar orbit is just about 0.8 km/sec,  or to land direct,  about 2.5 km/sec.  Those one-way totals are 4.09 km/sec to lunar orbit,  and 5.79 km/sec to land direct (remarkably close to the Mars value at min energy transfer).

To return by a direct departure from the lunar surface requires about 2.5 km/s,  or from orbit about 0.8 km/sec.  Landing at Earth is largely by aerodynamic braking,  but requires about a 2 km/sec landing burn.  Therefore,  total delta-vee requirements to return are 4.5 km/sec from the surface,  or 2.8 km/sec from lunar orbit.

The requirements to land and return entirely unrefilled would be 10.29 km/sec,  which is out-of-reach even at only 50 tons payload.  To use the ITS on the lunar surface will require propellant production on the moon,  although likely at somewhat lower rates and quantities than at Mars.

A related point:  if we presume the fully-loaded ITS uses essentially all of its 1100 tons of propellant achieving low Earth orbit,  we can back-estimate the delta-vee that is actually available from its BFR first stage,  even allowing for flyback.  Earth orbit velocity is just about 8.0 km/sec.  Allowing 5-10% gravity and drag losses for a vertical ballistic trajectory,  the min total delta vee is about 8.4-8.8 km/sec.  About 6.1 of that is from the ITS second stage.  The first stage need only supply 2.3-2.7 km/sec,  which means the staging velocity is just exoatmospheric at around 2.5 km/sec.  It should easily be capable of ~5 km/sec,  so the difference is for flyback all the way to launch site,  and propulsive landing.

Finally,  there has been some excited talk about using the BFR/ITS for suborbital high speed transportation across intercontinental ranges here on Earth.  That is a ballistic requirement similar to that of an ICBM.  The burnout velocity of the typical ICBM is around 6.7 km/s.  Allowing 5-10% margin for gravity and drag losses,  the delta-vee necessary to fly intercontinentally is 7 to 7.3 km/sec,  plus for the ITS,  about 2 km/sec for the landing burn.  Total is thus 9 to 9.3 km/sec delta-vee.

This is way beyond the delta-vee capability of the ITS stage alone,  notwithstanding the fact that 4 of its 6 engines will not operate at sea level,  and even if they did,  total 6-engine thrust of the ITS stage (1100 kN) is less than its weight (1300 kN or more).  But this delta-vee is within reach of the two-stage BFR/ITS combination (6.2 to 7.9 km/sec ITS and ~2.5 km/sec BFR for 8.7 to 10.4 km/sec),  and likely with a little less payload than the 150 tons typical to Mars.  Maybe something in the vicinity of 100 tons.

These estimates are rough.  I did not correct sea level thrust to vacuum for one thing,  my delta vee requirements are approximate for another,  and I did not explore the effects of using only the vacuum engines for higher specific impulse out in space.

Even so,  these results are very intriguing.  These calculations were made pencil-and-paper with a calculator.  Nothing sophisticated.
Posted by Gary Johnson at 2:09 PM