A Look at Nosetips (or Leading Edges)

This is a follow-up to the generic lateral skin panel investigation.  Flight speeds are supersonic to low hypersonic,  with analysis methods limited to ideal gas-based compressible flow.  This work presumes the same 10-ft long projectile shape as the lateral panel investigation.

The area studied here is the nose tip,  presumed with a half-inch nose radius,  per Figure 1 below (all figures at end).  This article calls out 2 references (see list below),  one of which is the closely-related lateral skin investigation.

That article has a list of several other relevant or related articles.  All of these are posted at http://exrocketman.blogspot.com,  and can be found with the navigation tool on the left of the web page.  Click on the year,  then the month,  then the title.

The heat transfer correlation is based on stagnation conditions just behind the bow shock,  at normal shock conditions.  There are slightly different film coefficient estimates for a leading edge versus a nose tip,  reflected by the coefficient of the Nusselt-Reynolds number correlation equation.

Reynolds number is figured from freestream velocity,  a diameter appropriate to the nose radius (so that only “several thousand” is turbulent),  and the density and viscosity calculated at stagnation conditions behind the normal shock wave.  The normal shock conditions are calculated from freestream conditions,  and the total pressure ratio equation from NACA 1135 (ref.1).  Free stream totals are computed by standard compressible flow relations,  also per NACA 1135.  These are limited to ideal gas conditions.

The Nusselt number correlation is NuD = C ReD0.5 Pr0.4 (rhof/rhoinf)0.25,  where rhoinf is the free stream air density,  and rhof is the density at stagnation conditions behind the normal shock.  The coefficient C is 0.95 for a cylindrical geometry appropriate to a leading edge,  and 1.28 for a spherical geometry appropriate to a nose tip.  The nose tip C = 1.28 was used for this study.

Properties versus temperature are correlations applicable to combustion gases as well as air,  just as in the lateral skin investigation (ref. 2).  These depend fundamentally upon inputs for molecular weight and specific heat ratio.   For the film coefficient h derived from NuD,  the thermal conductivity k is also evaluated at post-shock stagnation conditions.

The actual convective heat transfer depends upon the recovery temperature Tr:  Q/A = h(Tr – Ts).  In this investigation,  recovery temperature is presumed turbulent so that r = Pr1/3 in Tr = r(Tt – T) + T.  There is radiation from the hot surface to an environment that radiates back.

Radiation from (and to) the surface is figured with Boltzmann’s equation at some surface emissivity,  in this case a “black” highly-emissive e = 0.80.   Based on the strength of the lateral skin investigation’s sensitivity to surface emissivity,  only the “black” highly-emissive e = 0.80 was investigated for the stagnation heating.  This presumes some sort of metallurgical coating or a black ceramic paint.

Initially,  sweeps were run with no active cooling,  then adjusted to find the required active cooling for a desired max surface temperature of Ts = 1600 F,  as representative of a metallic nose tip construction. This produced curves of uncooled equilibrium temperature vs speed,  and then curves of required cooling rate per unit area vs speed to maintain only the desired temperature.

The results at 60 kft on a standard day for uncooled nose tip equilibrium surface temperature Ts vs Mach are given in Figure 2 below.  If one presumes that 1600 F is feasible for uncooled metallic construction,  given a highly-emissive surface finish,  then the “speed limit” to avoid stead-state overheating is just about Mach 5.  This result is a bit different for different presumed acceptable temperatures.

That equilibrium Ts vs M result does not presume any particular material,  or any particular construction technique,  it is merely the physics of energy accounting!  Figure 2 also shows the max service temperature levels recommended for several materials.  Something like an Inconel X or a 316 stainless steel might serve.  Bear in mind that the higher-temperature alumino-silicate and zirconia-based low-density ceramics shown on the figure are experimental-only,  not yet ready-to-apply.

Carbon-carbon composite ablative offers a higher speed limit nearer Mach 8,  but requires replacement every few flights,  precisely because it is an ablative,  albeit a slow one.  Titanium only gets you to about Mach 3.5 steady state:  titanium is very definitely NOT a high temperature material,  despite the commonly-held belief that it is.  That mistaken premise traces to titanium’s successful use as the skin material on the SR-71 and similar craft,  which had a max speed limit of Mach 3.3,  or else face damage.

The way around this quandary is possibly active cooling,  but it very quickly reaches ridiculously-infeasible levels with increasing speed,  as shown in Figure 3,  for a constant Ts = 1600 F,  allowing metallic construction.  At Mach 6,  the required cooling rate is near 700,000 BTU/hr-ft2 = 194 BTU/sec-ft2 = 221 W/cm2,  which is quite high.

Quite unlike the lateral skin panels,  for stagnation zones,  one doesn’t get very much relief by flying higher in the thin air.  For the uncooled nose tip,  the Ts vs M trends at 100 kft is shown in Figure 4 below.  This plot is all but indistinguishable from the 60 kft plot in Figure 2.  For 1600 F equilibrium temperature,  it’s still just about a Mach 5 speed limit.  That would be for the same metallic construction with a highly-emissive surface finish.

If space and weight for cooling systems are severely limited (as with most flight vehicles),  you are generally better off selecting a nose tip (or leading edge) material that can withstand the aeroheating uncooled,  except by radiation to the environment and conduction into the interior.  You will have to solve the design problem of how to “hang onto” a very hot part.

Allowing for what materials are actually ready-to-apply,  this probably means limiting yourself to about Mach 5 with an Inconel or SS316 nose tip (or leading edge) at about 1600 F,  at any altitude.

Or,  you might limit yourself to about Mach 6 or 7 with a carbon-carbon ablative.  This approach will be more limited by needing to design the attachment to a 3000 F part,  than by ablation and erosion of a part that otherwise could approach 4000 F at Mach 8.  Again,  this is more independent than dependent,  upon altitude.  There will be places in the flight envelope that you could go with uncooled lateral skins,  that you simply cannot reach,  with uncooled non-ablative nose tips or leading edge pieces.

For a highly conductive metal part,  extending it laterally where the heating is less than stagnation,  is actually a viable way to cool the part down some.  Once extended far enough,  the part is no longer isothermal,  perhaps allowing a practical attachment method.  That kind of thermal analysis cannot be done with methods this simple;  it inherently requires finite element analysis.

The same extended-part approach might work with high-density ceramic radome materials,  which can go hotter than metallic materials.  There are several,  silicon nitride is but one.  Temperatures in the 2000+ F class can be tolerated easily.  However,  the part attachment design problem is aggravated by the higher temperature.  These parts will have to extend far back along toward the lateral skin panel locations,  to achieve a cool-enough temperature at the attachment point.  That is not analyzable with the simple methods here.  It will require finite-element thermal analysis.

Note that inlet structures for airbreathing propulsion have not yet been considered at all.  These will result in yet-different flight limits,  a separate topic from stagnation items (this article),  or from the lateral skin panel topic.  Radiation cooling of inlet structures will be less-feasible-to-infeasible,  depending upon the geometry,  which is never simple.  Some of these surfaces will inherently soak out near the recovery temperature Tr,  which zeroes net convection to the part.  Others will equilibriate differently.  These will likely be the source of the most-strict limits in the flight envelope.

#2. “Thermal Protection Trends for High-Speed Atmospheric Flight”,  by G.W. Johnson,  2 January,  2019 (this one has a list of relevant or related articles). 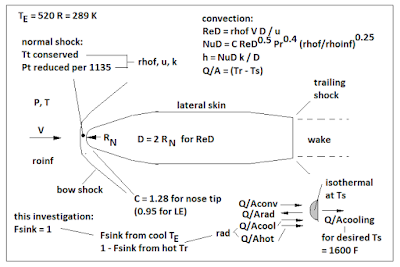 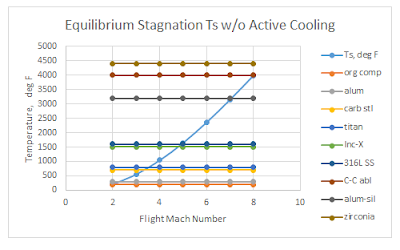 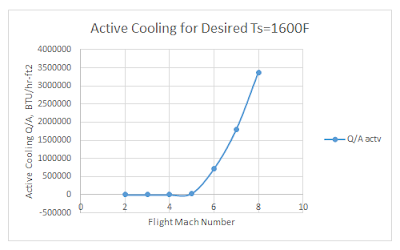 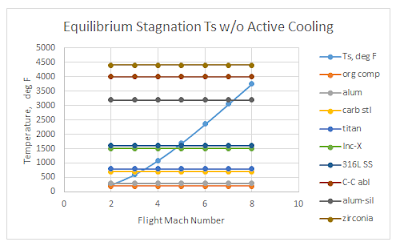 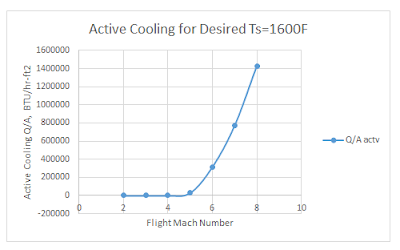