A Note on Solar vs Dust Storms on Mars

NASA published on its website for public consumption an informational report on the Opportunity and Spirit rovers late in July 2007,  when both were still running (although Spirit was no longer able to move).  This public information document gave some actual numbers in the text,  and included some comparative photos taken as the dust storm darkened the sky.

Here are the images NASA published describing conditions as the dust storm suddenly built up: 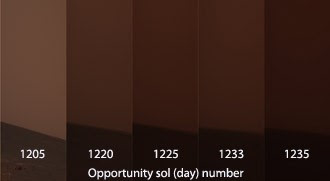 You can still find this document on the internet at https://www.nasa.gov/mission_pages/mer/mer-20070720.html.  It was after this publication date of 7-20-07,  that the Opportunity rover died in the extreme cold,  because its batteries could not be charged enough to keep its electronics from freezing.  Which means that the sunlight was even dimmer than is shown in this public release document.

Data from the text of the article:  normal energy capture before the storm was 700 Wh/day,  which dropped to 128 Wh/day (18%) as the dataset ended.  The engineers calculated they needed 130 Wh/day with everything shut down,  just to support running the heaters.  This data in this document was taken by the rover itself,  before the batteries drained and the rover died.  Quoting NASA:  “99% reduction of direct beam radiation,  leaving only diffuse radiation”. Diffuse is usually at most 10% of total.

It looks like recoverable power levels went down to something in the 5-10% range (all diffuse) for too long,  which is what drained the batteries and “killed” the rover in the cold.  Looking at the published photos in the NASA document,  that one on the right is just plain dark.  And that’s what it looked like before it got so dark as to drain the batteries and “kill” the rover in the cold!  No one can argue with that data,  regardless of its academic pedigree,  or lack thereof in this case.

The Mariner 9 event in 1969 was worse still:  no one since has reported the volcanoes on Tharsis Mons to be obscured in the dust layer.  But in 1969,  Mariner 9 observed that they were completely obscured,  for some 6 months.  From adjacent surface to peak,  these volcanoes are about 15 km tall.  The Martian atmosphere didn’t fully clear for 9 months.  THAT IS the Mariner 9 data!  And no one really knows when it actually started:  Mariner 9 found Mars that way when it arrived!  THAT is the worst case known!  Bar none!  So far.

So,  for design purposes,  you plan on zero solar power available for up to (at least) 9 months,  requiring some other source to replace it.  Or you kill your crew on Mars if there is no other source of power besides solar.  Take your pick.