Update 4-15-17:  A newer article dated 4-15-17 and titled "Do We Fight Global Warming Or Not?" updates and replaces this one.  They share the same search keywords that you can use for search filtering on this site.

Myself, I put more faith in observed ice behavior than actual or proxy temperature records. The actuals don't go back far enough. It is really hard to calibrate proxies adequately.

The empirical observation is that Milankovitch orbital cycles match glaciations and deglaciations very well (but not perfectly) over the last 3-4 million years of geologic record. There is really no adequate causality to explain this match-up fully, it is not a full theory or an established fact, just a empirical observation. However it holds up, in spite of a periodicity change from 100 kyr dominance to 40 kyr dominance during the last ice age.

(And you notice that I did not say a word about CO2 or its relative timing.)

Milankovitch cycles says that the big glaciers should already be forming in Eastern Canada, but they are not. The Arctic ice cap has instead been shrinking for at least the last 50 years. With the caveat that the match isn't "perfect", something appears to be different this orbital parameter cycle. The model is failing to match what is really happening.

Depending greatly upon whose data you believe, the divergence started 50 years ago, 2-300 years ago, or even 8-10,000 years ago. But there is a divergence. For whatever reason.

The volume of ice at risk of melting that is located above current sea level is enormous. Depending upon what you assume could melt, the rise could be anywhere from 1 to 100-something meters. There are roughly half a billion people living within 1 meter of current sea level, and nearly all of us live within 100-some meters of sea level.  Some sea level rise estimates are given in Figure 1,  added below as part of the update.  These are for "near-term" (century-scale) expectations.  Longer term,  more ice melts and the sea level rise is higher.

Billions could soon be on the move from flooded homes, and we demonstrably cannot handle the temporary evacuation of one flooded city of less than a million folks. I see a total disaster looming here, do you? You should. So should us all.

Now (and only now) does CO2 and CH4 get into it. Lab experiments with bell jars and bottled gases easily confirm the "greenhouse" effect of these gases. If their budgets rise in the atmosphere, there could well be some sort of warming effect, simply because it does happen on a small scale in the lab. It is therefore likely that there would be greenhouse warming, if enough gets added.

How likely, who knows? How much is enough? Who knows? The Keeling curve of measured data shows CO2 went from 280 ppm in 1958 to about 387 ppm today (400 ppm as of Feb 2014,  but I don't think that's been seasonally adjusted to an annual average yet). That's almost a doubling in about half a century. The trend is not linear, but concave upward (accelerating). That's real data at a single location (Hawaii).

In view of the looming potential flooding disaster, it makes sense to buy time by reducing those activities we know would make the problem worse: i.e., greenhouse gas additions to the atmosphere. This may or may not actually have the desired effect, but it surely seems a prudent thing to try. We need to buy that time to figure out how to deal with the migration of billions. We clearly do not know how to handle such a migration right now.

The global warming debate as currently framed is entirely foolish and pointless. It should be focused primarily on how to cope with the coming migrations, and secondarily on how to buy the needed time. Here's the rub: time looks to be short. Greenland is beginning to deglaciate (worst case 6 meter rise, perhaps within a century), and the mountain glaciers are almost certainly disappearing within a decade or so (1 meter rise). As for the rest, who yet knows?  West Antarctica is showing some signs of instability in 2013 and 2014.  East Antarctica,  not so much,  but changes in ice flow speed there have been noticed recently.

I will admit to this human failing: I get really pissed off by the current "debate". Condemning billions to starvation and death as civilization crashes, for the sake of profit or political advantage now, is a crime against all of humanity that makes the WW2 Holocaust pale in comparison.

Now,  instead of an emotional,  rhetorical appeal,  try logic.

Figure 2 below,  added as part of the update,  shows an oversimplified form of a standard trade study tool:  the decision matrix.  There are,  in this oversimplified example,  two choices available to us,  arranged here as column headings:  do we attempt to do something,  or do we do nothing?  The choices not available to us are Mother Nature's "decisions",  shown here as row headings:  either human-caused warming is real or it is not.  In the four cells are very brief descriptions of the consequences appropriate to the corresponding combinations of column and row headings.  The contrast is easiest to see,  if you overstate them a little,  and that hurts nothing.

You have to do this right:  you cannot choose a row (in this example),  because that is a matter of what nature does,  not a matter available for human choice.  We humans must choose (in this example) either one column or the other,  and then let the chips fall where they may,  regardless of the "choice" nature makes.  You do that by eliminating the column with the outcome in it that you cannot tolerate,  no matter what the other cells in that column offer as outcomes.  That's the proven strategy that is part of this method.

There is simply no other rational way to make the decision.

In this example,  there is only one cell with a good outcome,  that corresponding to "we do nothing" and to "nature says humans do not cause warming".  The cell with the worst outcome (civilization crashes and most of us die) is in the same "we do nothing" column,  for the case where nature says we humans really do cause climate warming.  The other two cells also have very bad outcomes (our global economy gets wrecked),  but those do not appear to be as bad as "civilization crashes and most of us die".

So the only rational choice available to us is try to do something to mitigate our greenhouse gas emissions,  as being the choice that kills the fewest of us.

The  belief that we cause,  or do not cause (take your pick,  it doesn't matter),  climate warming is quite properly discounted in the decision-making process,  precisely because it is a matter of belief,  not a decision under our control at all.  (Politicians hate that,  by the way.)

The beauty of this is that we do not even need to know the answer to nature's "decision":  we do not need to know "for sure" whether human activity causes,  or does not cause,  climate warming.  We can still make a good decision. 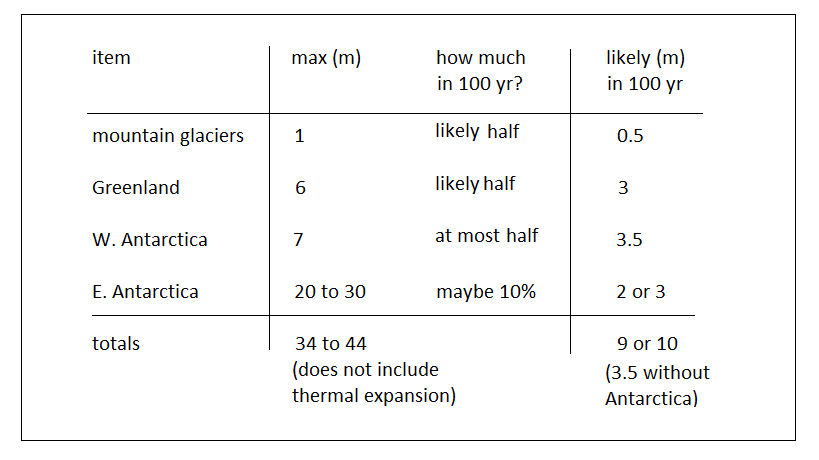 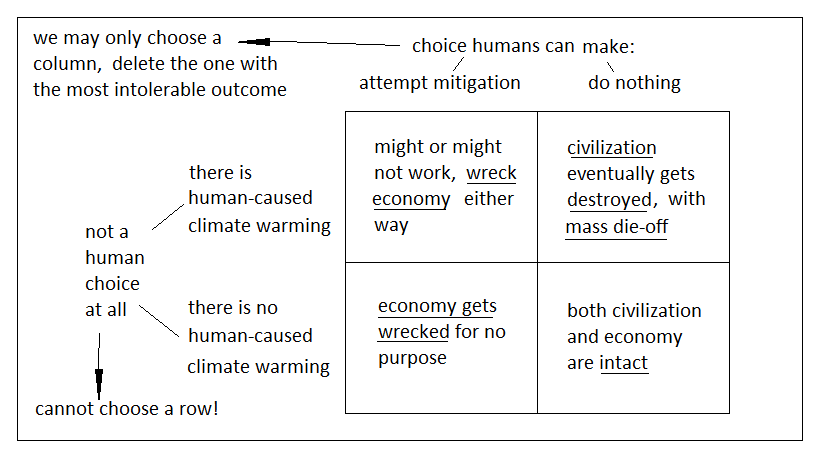