The baseline ramjet strap-on pod is illustrated in figure 1. It is a very clean cylindrical shape of length-to-diameter ratio near 8. The ramjet inlet is a translating-spike pitot type, all external compression, with a single 30o cone angle. Hidden in the air plenum are several necessary equipment items, and the wheel well for the steerable nose wheel. The pod carries its own fuel supply, and need not draw fuel from the core vehicle.

This design concept has evolved slightly from earlier concepts, mainly in terms of flight controls. The earlier wrap-around fins have been replaced by fixed fins, and dive brakes whose mechanisms are hidden in the ramjet nozzle recess. The lower pair of fins has replaceable skid tips, thus comprising the main landing gear. 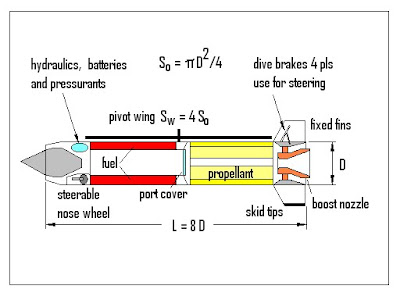 The pivot wing is about 2/3 of the body length, and can support sea level stall speeds in the neighborhood of 120-140 mph. The design calls for fuel depletion and stage-off at maximum 100,000 feet Mach 6 conditions in near-vertical flight. The dive brakes are fully deployed for fastest deceleration to subsonic speeds, at which point the wing is deployed. Using the dive brakes differentially for steering forces, the pod then spirals down to a land landing, under remote control from the ground.

Estimates for component weights in this design are based upon the X-15 rocket plane, arguably the most inexpensively-reusable rocket vehicle in history. Its inert mass fraction was very close to the 40% used for this concept design. One can assume titanium structural members with Inconel-X skins and inlet duct hardware, and insulated steel fuel tankage located inside, away from the hot surfaces. Bladder fuel expulsion is assumed. This construction approach is adequate all the way up to Mach 6 without heat protection, as was shown by the X-15 program.

The ramjet combustor is ablatively-cooled with DC-93-104 silicone, and the integral boost propellant charge is case-bonded in place upon that insulation, using the bond technology developed for ASALM-PTV. The inlet port cover is frangible glass with insulation. The booster nozzle rides with an O-ring seal on the ramjet throat, held in place by finger struts slotted into the nozzle bell. These are released by an outward-opening clamp, similar to the SA-6 “Gainful” ejectable booster nozzle. A booster pressure sensor triggers clamp release, the shatter charge for the port cover, initiation of fuel flow, and a pyrophoric magnesium ignition flare.

The pod is modular, in the sense that the inlet section is separable from the fuel tank and duct section, in turn separable from the ramjet-and-booster chamber section. It is assumed that a freshly-insulated and propellant-loaded ramjet chamber is substituted for the fired unit. The fired chamber is, in turn, refurbished and reloaded, for assembly onto another vehicle later. Modular separability thus enhances access for refurbishment.

On a unit area basis (So = 1 square foot), the weight statement estimated for this design is as follows. The ejectable items are 5 lb for the booster nozzle and 2 lb for the port cover in the 13.54-inch diameter corresponding to So = 1 ft2. In the absence of better information, it is simply presumed that all of these items scale in proportion to So.

Estimated booster performance is for a non-aluminized AP-HTPB propellant system that averages near 2000 psia chamber pressure. The nozzle is “perfectly expanded” at sea level, and under-expanded as it climbs. Average thrust per unit reference area is Fth/So = 5540 lb/ft2. Average Isp at sea level is 250.7 sec. The estimated exit area proportion Ae/So = 0.172, and the nozzle expansion area ratio is 15:1.

An actual trajectory estimate has not been made, in part because no core vehicle has been defined for this strap-on to assist. However, a constant-acceleration rough guide was calculated for vertical flight to Mach 6 at 100,000 feet on a standard day. The vehicle must average 5.5 gees to “hit” this endpoint condition. Ramjet takeover is presumed to be Mach 1.5, which for this rough trajectory, happens at about 7500 feet.

Using previous performance mapping results, plus a crude estimate of pod aerodynamic drag, the self-acceleration capability of the pod is then its thrust minus its drag (thrust margin), all divided by its weight. Net jet thrust was used, with all additive and spillage drag lumped into airframe drag. This self-acceleration figure was calculated for both the ramjet ignition and burnout weights, to “bound” the results. Calculations were made as a function of Mach number, parametric on several altitudes from 5000 to 100,000 feet. 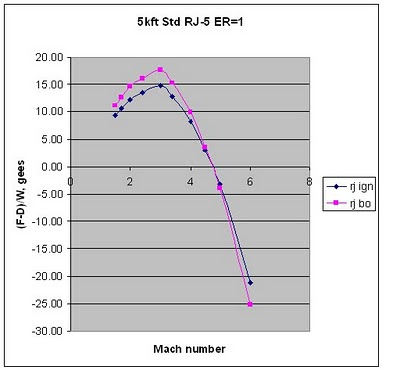 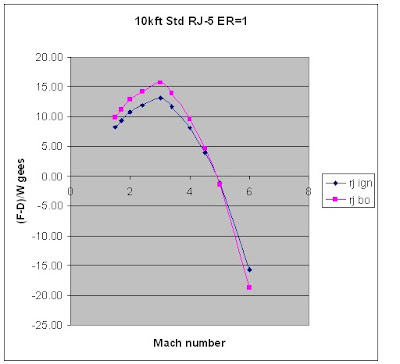 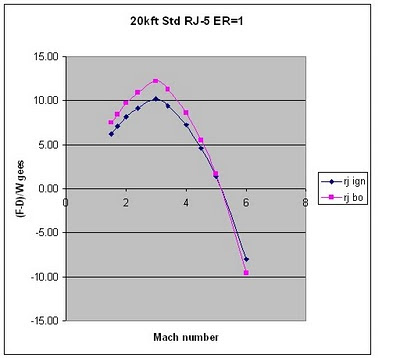 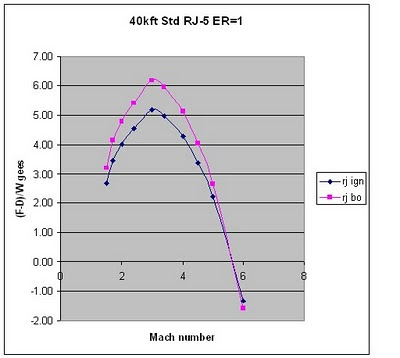 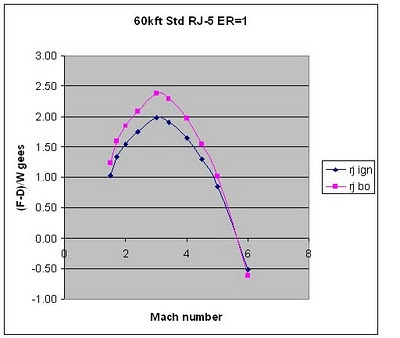 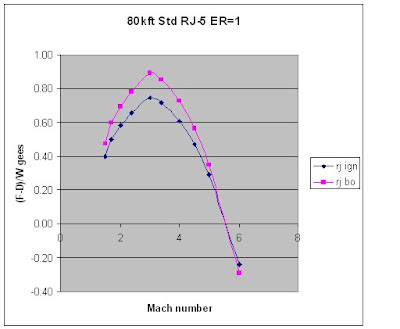 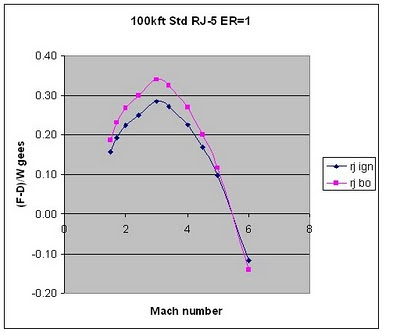 Although this is neither a realistic design study nor a full trajectory calculation, four important conclusions can be drawn from these results.

First and foremost, this kind of high-impulse thrust assist actually looks very promising for launch applications of all kinds, both vertical stage rocket, and hypersonic carrier aircraft launch. In large part, the attractiveness of ramjet-assist derives from the integral booster technology employed in this study. Such booster technologies were unavailable in the 1950’s when launch technologies were first being developed, appearing for the first time in 1967 with the SA-6 “Gainful” missile system. Subsonic-combustion ramjet technology has been operational since about 1950, but was “dead weight” from launch to takeover without the availability of integral boosters. (Note also that there is no compelling reason why a liquid or hybrid integral booster could not be developed.)

Second, without a more sophisticated inlet pressure recovery design than the single-angle cone used here, attractive levels of vertical ramjet acceleration capability all the way up to Mach 6 speeds at high altitudes appears to be just barely out-of-reach. That is not to say that useful horizontal-flight capability at Mach 6 is unavailable, even with this fairly simple inlet design, for these numbers show positive thrust margins to about Mach 5.5 at 80,000 and 100,000 feet. Remember, the pod drag used here may be too high, as it corresponds to a gun projectile, and includes a lot of nose pressure drag and base drag contributions that would be missing with a flow-through nose-inlet engine. (That drag data came from Hoerner’s self-published “Fluid Dynamic Drag”, section 16 page 21, figure 30.) Ultimately, for vertical launch, Mach 5 may be a better “target” terminal speed, while Mach 6 is more feasible for horizontal flight of hypersonic carrier aircraft.

Third: thrust and drag decrease with altitude, while weights do not. There is an altitude above which the acceleration capability of the ramjet becomes unattractive, simply because the weights are too large. For the vertical launch assist, this altitude is lower, simply because higher acceleration levels are required (the carrier plane can essentially “cruise” horizontally). Given these results with these assumed numbers for drag and weights, that vertical launch limit may be nearer 70,000 feet than 100,000 feet. This can be seen in the peak thrust margins shown in the plots for 60,000, 80,000, and 100,000 feet. Remember, to accelerate at all vertically, this must exceed 1 gee, and to maintain attractive levels for this kind of launch, it should be nearer 5 gees. But, for the carrier plane scenario, all that is needed is a nonzero acceleration potential, available at 100,000 feet to Mach 5, even with the crude design concept explored here.

Fourth, the ramjet strap-on pod explored here could just as easily serve a hypersonic carrier plane as the vertical stage rocket. The only difference is flying a little higher and faster with the hypersonic carrier plane, and a little lower and slower with the vertical stage rocket. Speculatively speaking, appropriate design “targets” for pod ramjet burnout conditions might be around Mach 4.5 to 5 at 70,000 feet for vertical launch, and Mach 5.5 to 6 at 100,000 feet for carrier plane launch. These are only crude estimates, and could shift dramatically with better inlet designs and more appropriate drag and weight data.
Posted by Gary Johnson at 10:41 AM