These images are also posted primarily for my NewMars.com buddies. They are excerpted from the detailed performance maps I generated for the nose inlet/center duct ramjet strap-on pod, of two earlier posts.

I generated these maps with a series of Excel spreadsheet worksheets to calculate the engine balance correctly, in lieu of an actual performance-mapping code. This is the same ramjet strap-on pod design reported in earlier posts, operated at equivalence ratio 1 (stoichiometric mixture).

The first image is the thrust and impulse versus flight Mach number at 5000 feet. Like all, this was for standard day conditions. The selected fuel control law was constant equivalence ratio (ER) 1. It quite clearly shows a peak near Mach 4 for thrust potential, with severe falloff toward both Mach 1.5 and Mach 6.

These data were obtained for a pod frontal blockage area So = 1 square foot, and are thus, in effect, frontal thrust density, lb/sq.ft. The specific impulse is higher at the low speed end, and about half or less at Mach 6, although still substantially attractive. This curve shape is very close to the inlet pressure recovery vs Mach curve. 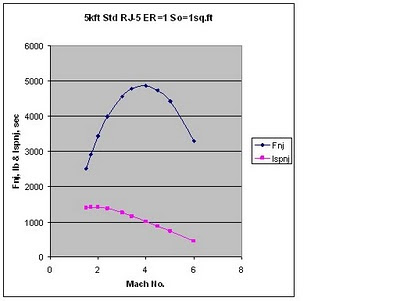 The following image is the same kind of data in the same format, at 20,000 feet. It shows the same story, except that frontal thrust is a bit lower. Impulse is about the same. 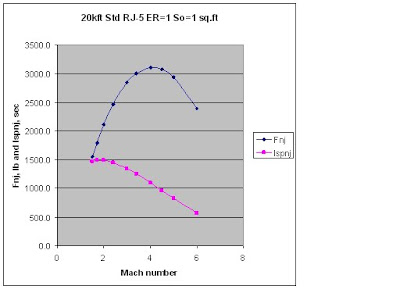 The following image is the same kind of data, for 60,000 feet. Thrust density is a lot lower, reflecting the thin air. Yet impulse is not a lot diferent. At Mach 1.5 only, the inlet unstarts by a small spillage percentage. 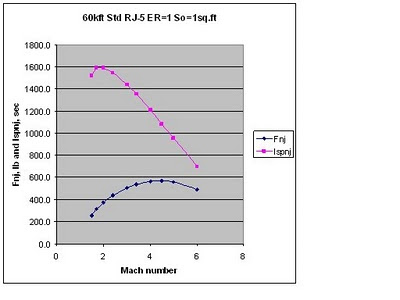 The following image is the same kind of data for 100,000 feet. Again, the thrust density is very low, reflecting the almost-vacuum conditions, while the impulse is still not a lot different. At 80,000 and 100,000 feet, I saw a rather flat thrust variation with Mach number. This allows a rather wide choice of terminal Mach number in the design for the 100,000 foot altitude. Again, there is a small inlet unstart at only Mach 1.5. 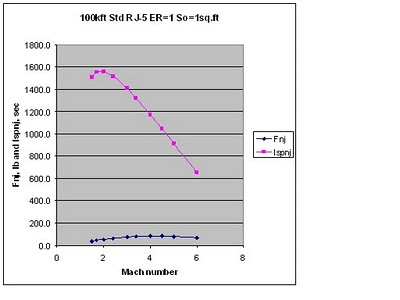 The solid propellant booster inside the combustor cavity features an AP-HTPB-aluminum composite propellant. I had to make a lot of assumptions, but I tried to be very conservative and way-underestimate what I could package into that space. I think the Isp estimate at sea level of 250.7 sec is pretty good, as is the effective frontal thrust density of about 5500 lb/sq.ft of So. The booster calculations I ran are based on an average operating pressure of 2000 psia, a burn time-to-hit of 8.3 sec, and a volumetric loading of about 60% in a wagon-wheel-type grain design. Expansion area ratio (15:1) was based on ideal expansion at sea level.

These data were calculated at odd times and off-hours over the course of a few weeks. Sequentially, they correspond to about 2-3 man-days of heavy-duty engineering, and in more than just one specialty. I hope you find them interesting and useful.

It was a lot of fun discovering that I really can still do this.
Posted by Gary Johnson at 7:58 PM