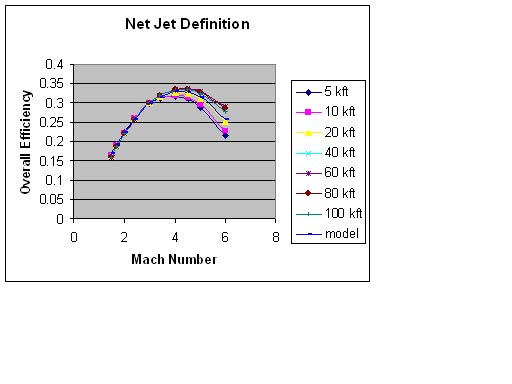 The image is a graph of overall energy conversion efficiency for the ramjet strap-on pod, for which cycle analysis performance was posted in 4 articles previously. 3 of these were dated 2-20-10, and the 4th was dated 2-28-10.

The thrust can be reported in either of two force accounting schemes, net jet or installed. These differ primarily in whether the inlet additive (pre-entry) drag is subtracted from thrust (installed) or added to airframe drag (net jet). This particular translating-spike inlet, which maintains shock-on-lip operation at all flight Mach numbers, has no additive drag. So, in this particular case, there is no difference.

In the ratio creating the efficiency, thrust divides by fuel flow to create the ramjet engine's specific impulse. Again, normally there would be two different values, net jet and installed. But, in this particular design, there is no difference.

In the graph above, there is very little effect of altitude, from 5000 feet all the way to 100,000 feet. The variation with flight Mach number is almost parabolic, if one fairs through the middle of the altitudes. A parabolic model was formulated and included in the graph. That model equation is:

Remarkably enough, if one does not spend much time flying at speeds below about Mach 2, a simple constant average figure of 30% efficient would be a good representation for purposes of very crude back-of-the-envelope models based on energy quantities.

Calculation of these quantities is very easy to include in the cycle analysis for the ramjet engine, as the above thrust power efficiency equation indicates. Whether this has utility beyond crude back-of-the-envelope calculations remains to be seen. But, it is very intriguing.
Posted by Gary Johnson at 11:40 AM