These images are "extras" computed from the strap-on pod ramjet performance-map data. That data covers flight Mach numbers from 1.5 to 6, and altitudes from 5000 feet to 100,000 feet. In an earlier post, the overall energy conversion efficiency was correlated vs flight Mach as almost independent of altitude. This has potential application to rough-sizing vehicles in "back-of-the-envelope" (BOE) analyses.

In this post, the pod thrust is correlated vs flight Mach and flight altitude in two graphs. The first shows net jet thrust vs Mach number parametric on altitude. Similar to the efficiency, these figures are very insensitive to altitude. The average model through the center of the data is a simple quadratic fit: 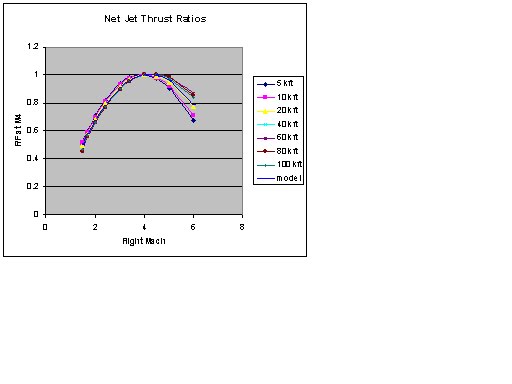 The second shows the net jet thrust data at only Mach 4 as a function of altitude. The model that tracks this data very closely is a fairly simple exponential fit: 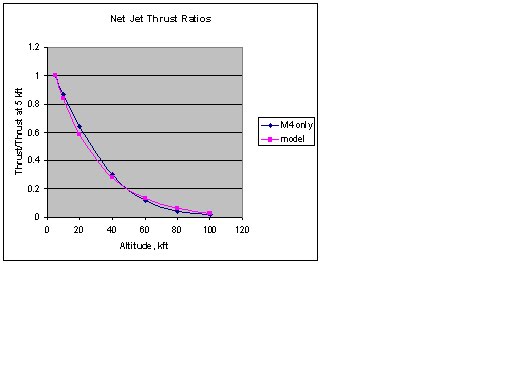 The scaling value that converts these ratios to actual thrust is net jet thrust of a 1 square foot-size engine (based on outside diameter) at Mach 4, 5000 feet conditions. This is essentially the frontal thrust density Fnj/So = 4860.3 lb/sq.ft.

This particular engine has a translating-spike inlet for constant shock-on-lip operation at all flight Mach numbers from 1.5 to 6. Therefore, it has no additive (pre-entry) drag. The engine is sized so that it does not spill air sub-critically in this flight envelope (except a tiny amount at low speeds and very high altitudes). So, installed thrust and impulse are pretty much the same values as net jet.

The engine specific impulse data are harder to correlate, since the variation with altitude does not diminish to insignificance, the way it did with normalized thrust ratios. Still, all the curves have the same shapes vs flight Mach number or vs altitude. Two plots are given: one of specific impulse vs Mach parametric upon flight altitude, the other specific impulse vs flight altitude parametric upon flight Mach number. For BOE rough-sizing purposes, the second plot may be easier to use as a graphical estimating tool. 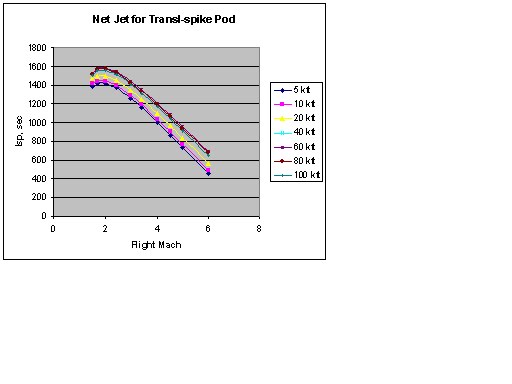 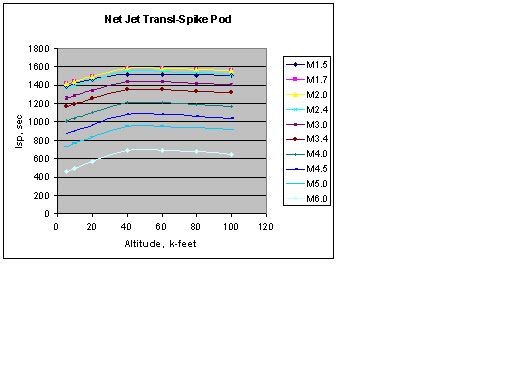 Once again, the impulse data are actually for net jet thrust-drag accounting. But, for this particular design, the installed numbers are the same.