This budget impasse in DC is the most egregious example yet of election politics being more important to our elected representation than their sworn duty to do the people's business. Both side's positions on this issue are based on lies to us.

There is an analogy between what I call the “leaky bucket”, and any budget , from an individual to the US government. This picture makes it clear: 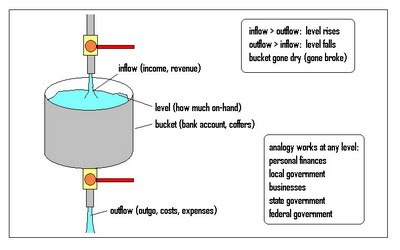 As drawn, the bucket will sooner or later run dry, any time the outflow exceeds the inflow. The same is true for any bank account. This is running a deficit.

The bucket will also sooner or later fill to overflowing, any time inflow exceeds outflow. Again, the same is true of any bank account. This is running a surplus.

The water level in the bucket will stay steady, any time the outflow exactly equals the inflow. Same is true for any bank account.

If the account is full, then one can run a deficit temporarily in time of need, but only until the account is emptied. A recession is one such need: government spends when no one else will, so that the economy does not grind to a complete halt (a true disaster) for lack of any spending at all.

The lower control valve (outflow) is analogous to rates of spending. Again, for the US government, these are the various funded programs. Spending is controlled by deciding how much and which items to fund.

The water bucket fills fastest if the outflow is turned off, and the inflow is turned up to maximum. But, in the real world, there are definite limits to how much spending can be cut, and how high taxes can be. Most of the time, you have to do both. Here’s why…

When taxes get too high, people get hurt. Those hurt worst and first are the poorer folks (overtaxing businesses does cut jobs). Carried to extremes, everyone suffers.

When spending cuts get too deep, people get hurt. Again, those hurt worst and first are the poorer folks. Carried to extremes, everyone suffers.

The sacred cows for the Democrats are the entitlement programs, especially Social Security, Medicare, and Medicaid. They would prefer to balance the budget by raising taxes. It’s an ideology thing.

For the Republicans, the sacred cow is “no tax increases”. They would prefer to balance the budget by spending cuts. Ideology again.

We cannot cut spending enough to balance the budget by that means alone: too many people would get hurt. That’s simply a fact of life.

Similarly, we cannot balance the budget by raising taxes alone: too many people would get hurt. That is also a fact of life.

Clearly we have to do both. It’s way past time that our elected representatives put aside their ideologies and get on with the job of governance.

We need some statesmen who will actually do the peoples’ business, not more politicians putting party advantage ahead of the good of the people.