This posting revisits source data on the internet, and revises, replaces, and/or updates the data posted here earlier in “Launch Cost Data”, dated 1-9-12. To the extent possible, I used data from the websites of the actual makers of the launch vehicles. Two figures are at the end of this article.

For the Falcon series, I obtained both payload and launch cost data directly from the Spacex website, which I know to be periodically updated. I searched these data as of 5-26-12. These are for max payload delivery capability to low Earth orbit (LEO) launching eastward out of Cape Canaveral. Vehicles include Falcon-1, Falcon-9, and Falcon-Heavy, in order of increasing payload capability.

I did include the Falcon-1 data in order to see a very nonlinear 3-point curve for unit cost vs payload size. One should bear in mind that Falcon-Heavy has not been ground-tested or flown yet, although it should be flying within about 2 years.

For the Atlas-V series, I included only those configurations capable of 18 metric tons or more to LEO out of Canaveral. That gave me another 3-point curve, out on the low-slope range of the Spacex/Falcon curve. ULA’s website provided payload data on the Atlas-V-HLV (heavy lifter) configuration, and shows a copyright date of 2011. They provide no launch prices at all.

I obtained payload data on the other Atlas-V configurations, and all my launch price data, from the spaceandtech.com website. It shows a copyright date of 2001, so the price data is fairly obsolete, at least due to inflation. One should also note that the LEO payloads for Atlas-V-HLV disagree between the two websites, although the rest seems accurate. I used ULA’s data as much more recent.

I obtained LEO payload and price data from spaceandtech.com for the following single-point vehicle configurations: Delta-IV-H (heavy) from ULA, the no-longer-flying Titan-IVB, the Russian Proton D-1, and France’s Ariane-5. All were selected for 18+ metric ton capability to LEO, presumably eastward out of Canaveral.

The spaceandtech.com launch price data were “estimates only”, and by copyright date, are 11 years out of date. I corrected these for 11 years of annual 2% inflation, before computing unit prices for my comparisons. The Spacex website prices needed no correction, being quite current as of this writing.

I computed minimum unit cost for LEO payload delivery from Canaveral, by dividing launch price by the maximum payload deliverable. Unit prices this low only obtain if the vehicle flies fully loaded. To correct these unit prices to other (lower) loadouts, one must divide launch price by the lower payload loadout. It makes a “fish-hook” curve tangent to my plots, due to the 1/x effect, where x is payload.

The first thing to point out is the nonlinear trend of unit cost vs payload weight. Below about 10 metric tons delivered to LEO, this is has a high slope. Above about 10 metric tons, the slope is low, and just about the same for both Spacex’s Falcon series and the ULA Atlas-V series. The single-point spot checks of ULA’s Delta-IV and the French Ariane-5 are right in the same ballpark. Russia’s Proton D-1 falls right on top of the Spacex curve, while the others are slightly higher.

These are all launch vehicles currently competing in the commercial launch market (excepting Falcon-Heavy, which soon will). The range of prices at an arbitrary constant 20 metric tons is about $4000/kg ($2000/lb) Spacex, $5800/kg ($2500/lb) Atlas-V, and $6500/kg ($3000/lb) for Delta-IV and Ariane. In my opinion, that spread of unit prices most likely reflects how successful each company has been at simplifying the rocket and reducing the logistical support for each launch. All seem to be more or less competitive, with Spacex and the Russians seemingly the most successful at lowering costs.

Titan-IVB is no longer being flown, and was never really used in commercial competition. That is a very important difference. This is a launch vehicle that, in my opinion, was operated and supported more like the way US (and other) government launch vehicles were operated and supported for all the decades until commercial space “took off”. The corresponding logistical tail would be enormous, and the price shows it, at something near $18,500/kg ($8500/lb).

Not shown on these curves is the unit cost of the now-retired Space Shuttle. Because it was a spaceplane, the payload delivered to orbit is a small fraction of the mass delivered to orbit. Further, it was a complicated government operation with a truly enormous logistical tail supporting it. The Shuttle delivered at most 25 metric tons to LEO, for a launch cost in 2011 dollars of about $1.5 billion. At max payload, that’s about $60,000/kg ($27,000/lb).

Those Space Shuttle unit cost points are completely off the scale of my plots here. They are one full order of magnitude larger than current unit prices for payloads in the 18-29 metric ton range. That actually means our $100 billion space station could have been far cheaper, by many factors, if launched and assembled today with these rockets.

Another major point to make is the disparity between the government way of doing things, and the commercial way of doing things. Fairly compared, we look only at expendable launch rockets, and right at 20 metric tons delivered to LEO. Titan-IVB is about 4 times more expensive, but about 2 to 3 times cheaper than Shuttle.

For launching 20-ton (or more) payloads one-way to LEO, it would be hard to beat the expendable launch rocket, because of its demonstrated factor 2-3 cheaper unit cost than a spaceplane, all compared as a government -type operation. Launched on commercial rockets instead, the unit cost is around 4 times cheaper still, than a government-style operation.

That is not to say that commercial spaceplanes cannot be useful, because they can. But, I suspect this will be for the much smaller payload masses, where the launch rocket curves trend much more sharply upward as delivered payloads get smaller. In my opinion, a good spaceplane will be closer to the size of an X-37 than our old enormous Shuttle (or maybe even smaller still).

Final point: for payloads over about 10 tons, the slope of the decreasing unit cost curve is very low. Tripling the payload capability would seem to cut the price only by a factor of 2. So, developing truly giant launch rockets, even those simplified and supported the commercial way, would not seem to pay off very well: orbital assembly from smaller payloads could be quite competitive. But, done the “government way”, such giant rockets will never compete, using the same slope on the Titan-IVB data.

I see no reason why we cannot build whatever craft we want, in LEO from docked modules, to perform any mission we desire, at a reasonable cost. We can do this right now.

The “breakpoint”, from a unit cost standpoint, seems to be in the vicinity of 10 metric tons delivered to LEO from Canaveral. We already have multiple launchers available in the 18-29 metric ton class, and will very soon have a 53 ton launcher. The larger, the better, for it lowers unit cost slightly.

Unless there is a specific and overriding need, I see no purpose to developing a giant launch rocket in the 100+ ton LEO payload class. I see even less sense doing this as a “government-style” operation; it would only make sense if done in the same commercial style as the existing 10+ ton Falcon-9, Atlas-V, Delta-IV, Proton, and Ariane-5 rockets. NASA has never built such a thing. Nor has any other government agency.

The rest of the existing launcher data seems to suggest that, for now, we standardize the modules of future spacecraft designs at about 14.5 to 18 metric tons, so that the maximum number of launchers will be available from the maximum number of sources. That fits very well with all current and near-term expected launchers. For example, Atlas-V-HLV could possibly carry two 14.5 ton modules. 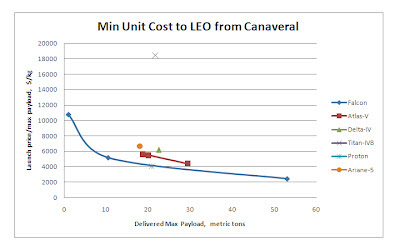 For US units fans: 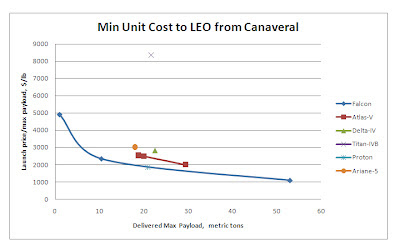