My best take on current and near-term predicted launch costs was posted 5-26-12 on this site as "Revised, Expanded Launch Cost Data". Today, I found an NBC news story on NASA's best estimates for launch prices on its SLS giant launch rocket, yet to be developed. Using their data, I computed payload unit prices as delivered to LEO from Canaveral. Here are three excerpts from the NBC story with the essential data:

The giant rocket NASA is building to carry astronauts to Mars and other destinations in deep space may cost $500 million per launch when it's flying regularly, space agency officials said Tuesday.

In its initial incarnation, the SLS will be capable of lifting 70 metric tons of payload. But NASA eventually plans to build several variants of the rocket, allowing it to carry 105 tons in one configuration and 130 tons in another.

"We can move from one configuration to the other configuration with not a lot of cost," Bill Gerstenmaier, NASA's associate administrator for human exploration and operations, said Tuesday at the SPACE 2012 conference.

The basic message from this is essentially-constant launch price for 3 payload levels ranging from 70 to 130 metric tons. I added those data to the data plotted in my 5-26-12 "Revised, Expanded Launch Cost Data" posting. The revised figures are given below (Fig 1 for US units, Fig 2 for metric mass units, both in US dollars).

-- Oops,  got the figure titles and callouts backwards in terms of units.  Sorry.  Just noticed it and fixed it today,  9-28-12.  Changes in bold type. 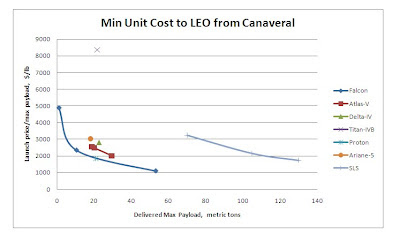 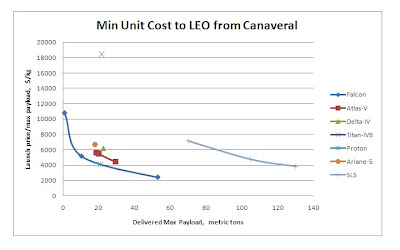 Looking at either revised figure, if one extends the two trend lines for the Spacex Falcon family and the SLS "family", it is clear that SLS would be around 4 times more expensive per unit mass than the Falcon family, or actually any of the commercial expendable launchers. That is exactly the factor I estimated in the 5-26-12 posting.

Furthermore, a trend curve of the same shape as the Falcon family, drawn through the SLS data, would come pretty close to the Titan-IV data point, another vehicle in the "government project" class (as discussed in the earlier posting). This also helps confirm the conclusions drawn then. This applies to both the government vs commercial vertical expendable launch vehicles comparison, and to the spaceplane vs vertical expendable launch vehicle comparison (as based on "government" vehicles).

Thus, the conclusions I drew in that 5-26-12 posting are thus independently confirmed by NASA's own published estimates. Compared at the same payload mass, under the assumption that max payload is flown, "typical government" expendable launchers are definitely around factor 4 more expensive than expendable launchers competing in the private launch market. The essential difference is smaller logistical "tail" typical of commercial competitive systems.

A major change in technology (such as Skylon) would be required to change this picture significantly, due to the smaller launch-basis payload mass fraction generally available in a spaceplane, as compared to an expendable vertical launch rocket.

The other "wild card" is the reusable vertical launch rocket, which might be cheaper than the expendable version, all else being equal. Whether that can really be achieved, remains to be seen.

Results with Space Shuttle SRB solid-propellant booster rockets were not all that encouraging, because they had inherently-higher inert mass fractions than typical liquid fuel booster stages, and they had a significant non-reusable rate, most of which was attributable to ocean impact forces.

Neither are the Falcon-9 results to date very encouraging. None of these have been deemed reusable, due to a combination of re-entry air load damage, and ocean impact damage.

How any of this might impact launch costs is completely undetermined, as of this date.