The one-shot chemical Mars lander design of reference 1 was reanalyzed to see if it could be made to serve the same role effectively at Mercury (it can). Since Mercury is airless, descent from a low circular Mercury orbit of 100 km altitude was assumed. All analyses assume descent from circular orbit, not high-speed direct descent from an interplanetary transfer orbit. Analysis methods are nothing but pencil-and-paper rocket equation calculations, with some judgmental factors thrown in, to ratio ideal velocity increments up to actual required velocity increments. While crude, these results are most definitely “in the ballpark”.

Velocity requirements were determined from the data in reference 2 for a 100 km circular orbit altitude at Mercury. The basic data from the spreadsheet analysis are given in Figure 1 for all of the destinations of interest, not just Mercury, and also including Earth as a reference. These destinations of interest include Mars, Mercury, and Earth’s moon in the inner solar system, the 4 large airless moons of Jupiter, plus Titan with its dense atmosphere at Saturn, and the four largest known asteroids in the main asteroid belt. All figures are at the end of this article.

The typical Earth gravity losses were ratioed by the relative surface gravity of the destination to that of Earth. These results are given in Figure 2. The final one-way delivered velocity requirements are shown in Figure 3 (along with the drag coefficient scaling column from the original spreadsheet, just to be complete). That figure also shows a higher requirement reflecting an extra 2.8% velocity margin. For Mercury, ascent and descent vehicles should be capable of delivering over 2.944 km/s, and ideally nearer 3.027 km/s.

These data are repeated here for direct comparison only. The ascent vehicle was a one-stage device with a crew cabin that doubles as an abort capsule. It is fueled by monomethyl hydrazine and nitrogen tetroxide (MMH-NTO) storable propellants. The ascent vehicle engines are canted 10 degrees for retro plume stability in Mars’s atmosphere, and also serve as the descent engines. The crew cabin / abort capsule is loosely based on the Spacex Dragon without its trunk module. It is intended to carry 3 astronauts plus a lot of propellants to support the abort scenario, and features a much thinner, lighter heat shield than the “standard” Dragon. This ascent vehicle is illustrated in Figure 4.

The descent vehicle comprises a basic frame plus cargo deck, a heat shield that is dropped once the hypersonics end at about Mach 3, extendible landing legs, an aeroshell (portions of which double as unload ramps), and descent propellant tanks plus cargo modules anchored to the cargo deck floor. These descent propellant tanks feed the ascent vehicle engines for a direct rocket-braking touchdown on Mars, without resort to any aero-decelerator devices. This is because end-of-entry occurs at too low an altitude: there is not enough time remaining to deploy an aero-decelerator of any type, much less have it do any good. This vehicle is depicted in Figure 5. It weighs 60 metric tons at entry, carries 3 astronauts plus 5.943 metric tons of cargo (equipment, supplies, etc).

It should be noted that the de-orbit burn from low Mars orbit is about a 50 m/s velocity increment. At this level of analysis, that is negligible. Similar very low values would also obtain at the other destinations of interest. Such a burn can be accomplished with nothing more than attitude-control thrusters.

It should be noted that the Mars lander is a dead-head payload item for any orbit-to-orbit transit vehicle going to Mars. Each lander taken on the Mars mission is thus a 60 metric ton payload item. If multiple landings are to be made in one mission, then it is likely that the mass of the landers could exceed the mass of the habitat and supply storage modules for a crew of 6, but that is a problem for the transit vehicle design, and out of scope here.

It should also be noted that these landers are items that must be assembled in low Earth orbit from components that must fit within the payload shrouds, and within the mass limits, of available launch rockets. In the near term, those would include the Atlas-V and Delta-IV families, Falcon-9, and starting next year, Falcon-Heavy. Considerable assembly in orbit is required. This is a separate topic.

Modifications for Use at Mercury

At Mars, most of the descent velocity increment is accomplished by hypersonic aerodynamic drag. This cannot be done at airless Mercury, indeed, there is no need for a heat shield at all. Extra propellant must be added for a rocket braking descent of the kind used by Apollo at the moon. The heat shield can be deleted, saving about 7 metric tons in this design. Most of the aeroshell can be deleted, except for a couple of panels that serve as unload ramps. That might save another half a ton, but that is ignored.

The ascent velocity requirement at Mercury is a little smaller than that at Mars, so a small amount of the ascent vehicle propellant may be used during descent, and still meet some safety margin on ascent. I got an approximate value of 2.728 tons for this ascent vehicle propellant reallocation. Otherwise, the very same ascent vehicle used at Mars may be used at Mercury. That vehicle is depicted in Figure 6. Its mass at ascent ignition is a bit lower (compared to Mars) at 19.939 metric tons. There is no change at all to the vehicle’s structure.

Descent Vehicle Modifications for Use at Mercury

The original Mars descent configuration carried 15.390 metric tons of descent propellant in tanks secured to the cargo deck inside the very voluminous aeroshell. That scheme was expanded to six tanks 2 m in diameter by 2.84 m cylindrical length, at a volume ratio of 90%, and an inert mass fraction (loaded tank basis) of 4%. That puts 60.390 tons of propellants on the cargo deck, plus the small allocation from the ascent vehicle tanks, for a total of 63.118 tons of descent propellant, and a total mass of 97.573 tons at start of descent from orbit. There is still plenty of deck space available for cargo.

I had to reduce the cargo mass a little bit, to 3 metric tons, before I could show some velocity increment safety margin in descent. That would be 3 metric tons of equipment and supplies for 3 astronauts on the surface of Mercury. That vehicle is depicted in Figure 7.

An unmanned cargo-only version (analogous to the cargo-only version at Mars) would carry those 3 tons of cargo, plus essentially the entire mass of the ascent vehicle at ascent ignition (19.939 tons) as cargo: some 22.939 metric tons. That would be for the same total descent propellant load, and the same total mass at start of descent. That vehicle is depicted in Figure 8.

The same basic lander hardware that works from low Mars orbit can be very easily modified to work from low Mercury orbit. This is true for both manned and unmanned cargo-only configurations. This kind of “universal lander” approach can save a great deal of development effort and resources.

The modifications for Mercury are deletion of the descent vehicle heat shield and most of its aeroshell panels, and addition of extra propellants for the descent. A small allocation of propellant from the baseline ascent vehicle is also used for descent. The manned version’s cargo mass is reduced a little, and its start-of-descent mass is increased, relative to the Mars configuration. The ascent vehicle itself is unmodified. The unmanned cargo lander trades the ascent vehicle for more cargo, same total mass.

Since the moon is both airless, and lower gravity, the same components useful at Mercury should be useful from low lunar orbit, at greatly-increased cargo loads. That analysis needs to be done. There is also the possibility of flying to the lunar surface from low Earth orbit with versions of these vehicles.

Essentially the same vehicle configurations that work for Mercury and the moon should work for the four large airless moons of Jupiter, and the four largest asteroids. Those analyses need to be done.

Retaining the heat shield and aeroshell, and adding parachutes, should work for Titan, which has a dense atmosphere, but very weak gravity. That analysis needs to be done. 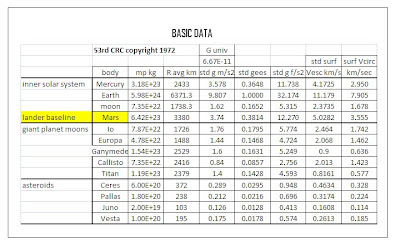 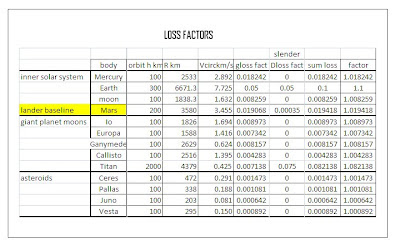 Figure 2 – Circular Orbit Speeds and Data for Destinations, Including Mercury 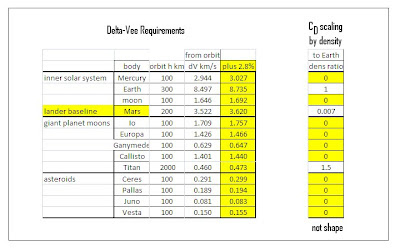 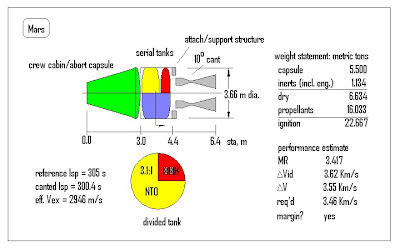 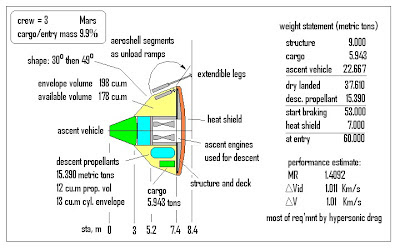 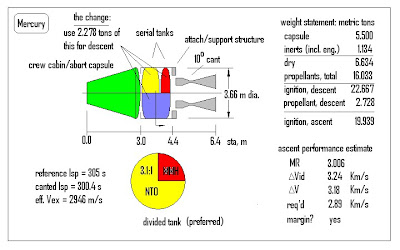 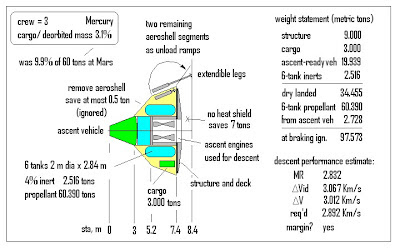 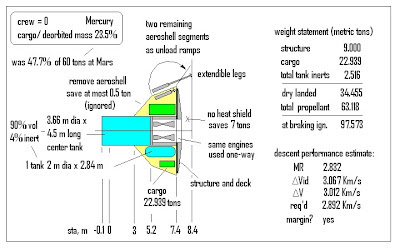