The question at hand is:  how feasible is a single-stage spaceplane to orbit and back,  that has airliner-like characteristics in order to lower ticket costs for passengers,  or per-pound costs for cargo (or any other effectiveness criterion, including the difficulty and cost of military missions).  The notion behind this question is that until spaceships can be operated like airplanes,  costs of access to orbit will simply be too high to do anything but the most critical tasks there,  the ones for which cost is ignored.

To answer the question at hand I did a little approximate bounding calculation.  I used the weight statement of a well-proven,  long-serving airliner as the weight statement for my spaceplane.  I assumed a vertical launch,  non-lifting ballistic fast ascent to minimize gravity and drag losses at about 10% of the orbital speed to be achieved.  (If you stay low at very high speed,  the drag losses can easily exceed 100%-300% of orbit speed.)  I also assumed on-orbit,  de-orbit,  and go-around-at-landing propulsion weights to be part of the inert weights on ascent (!!!!).

Some may argue with my using the high inert weight fraction of the airliner for the spaceplane.  But I would remind them that if you want true airliner characteristics,  then the vehicle must be able serve for about half a century and about 40,000 landing/take-off cycles,  without a single major airframe rebuild.  That’s what airliners do,  and their airframes not subjected to the abusive loads that a spacecraft must endure.  We are talking about an aluminum airframe whose entire exterior must be protected by some sort of reusable heat shield (which must serve just as long without a rebuild).  The 5-10% inert fractions of rocket stages are just entirely inappropriate assumptions to make for a winged spaceplane.

The analysis uses the rocket equation with a corrected delta-vee requirement.  I used 25,000 ft/sec as the velocity to be achieved (maybe 26,000 is better,  but so what?).  This is for a low Earth orbit eastward at no more than about 23 degrees inclination.  Orbital altitude might be around 100-300 statute miles.

The situation and aircraft data that I used are given in Figure 1.  The spaceplane specific impulse (Isp) requirements shown there are to be interpreted as an average for the entire ascent trajectory.  Note that the max cargo weight and max fuel capacity of the Boeing 747-100 airplane cannot both be had,  simultaneously.  The gross weight limitation restricts the sum of these to a fixed amount shown in the figure.

I went ahead and used these limitations to figure my spaceplane at max payload and at max fuel load.  I solved the rocket equation for a given mass ratio and theoretical delta-vee,  for the exhaust velocity required to accomplish the mission,  and then converted that to a trajectory-averaged specific impulse (Isp) requirement.  At modest acceleration,  you leave the air at about Mach 2 / 130,000 feet conditions,  still near vertical.    The depression to horizontal and acceleration to high speed occurs exoatmospheric.

There is a thrust greater than weight requirement for vertical takeoff that combines with a diameter limit,  into a frontal thrust density that must be equaled or exceeded in order to lift off.  Later in the trajectory,  because the ascent is still near-vertical,  thrust minus drag and that same diameter combine so that the same frontal net force density must still be exceeded in order to continue climbing.  Those estimates are also given in the figure. 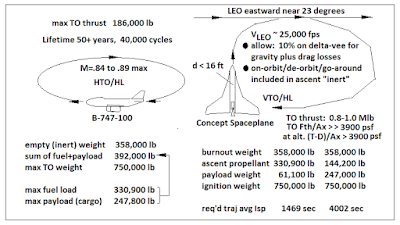 Figure 1 – The Data Used for the Bounding Analysis

I did not even try to estimate drag data.  But,  on a frontal cross section area basis (not wing planform area !!!!),  it would be very hard indeed to imagine any shape with a drag coefficient averaging less than 0.4 across the speed range from launch to atmospheric exit at around Mach 2-ish.  Drag is a very significant force,  especially around Mach 0.9 to 1.3 (transonic).  At Mach 1 and 45,000 ft conditions,  that would be 5000-6000 lb of drag at the very least,  even without considering that in the real world very few drag coefficients would be under 1.2 (not 0.4) at Mach 1 speeds.  The drag could easily be 3-4 times larger than those numbers.

It is very important to understand that there are both specific impulse and frontal thrust density requirements that simultaneously must be met,  in order to achieve results in this scenario.  These have to be met on a trajectory that begins at zero speed,  vertical,  at sea level,  and that leaves the sensible atmosphere at about Mach 2 (2000 ft/sec),  still near-vertical,  at around 130,000 feet or so.

So,  what are the possible propulsion concepts,  and what are their characteristics,  as expressed in these terms?  For my bounding calculation,  I looked at technologies we actually have,  and at technologies we don’t actually have,  but which we could actually develop.  That excludes “Star Trek” warp and impulse drives,  and other similar things,  for which there exists no science.  The list is:

The chemical rocket systems have the thrust density to take off vertically and accelerate upward,  but they lack the required specific impulse capability by a very large margin.  The one nuclear thermal rocket for which we have real test data likely cannot meet the thrust density requirement to take off and climb due to its low engine thrust/weight ratio,  plus,  it lacks the specific impulse capability to meet the needs of the low payload fraction case.

The gas core nuclear thermal rocket concepts are exactly that:  concepts.  None has ever been built and tested.  So the data are just best guesses.   These concepts very likely have much better engine thrust/weight ratios,  so that frontal thrust density requirements might be met,  as long as no waste heat radiator is required.   The closed-cycle gas core “nuclear light bulb” engine comes close to meeting specific impulse requirements with a clean exhaust for the low payload fraction case.  The open-cycle gas core engine definitely satisfies the impulse for the low payload fraction case,  but has a radioactive exhaust plume.  None meet requirements for the high payload fraction case,  for which the economics would be more feasible.

Only nuclear pulse propulsion meets the impulse requirements and the frontal thrust density requirements,  and for both cases:  low and high payload fraction.  There are two very serious downsides:  the vehicle must be very large (over 5000 tons at launch,  preferably over 10,000 tons),  and the “exhaust stream” is quite literally a series of nuclear explosions in the atmosphere,  starting with a surface burst.  Not only is there radiation released,  there is a very destructive EMP. 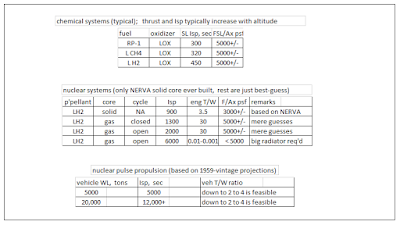 Therefore,  of the rocket and rocket-like concepts,  only the “nuclear lightbulb” engine might possibly serve,  and then only if the weight statement can be adjusted to make 1300 sec Isp feasible.  This will be a difficult design to do,  without a lot of margin,  and with a reduced payload fraction that makes the economics more difficult.  Such a weight statement might be ascent inerts 0.40,  ascent propellant 0.50,  and payload 0.10,  remembering that “ascent inerts” includes on-orbit,  de-orbit,  and landing go-around propulsion that is not the nuclear ascent engine.

The airbreathers are summarized in Figure 3.  At first glance,  the Isp’s of the ramjet and the gas turbines looks attractive,  but upon further inspection the frontal thrust densities are clearly not feasible.  Further,  the impulses are only attractive in a narrow band of speeds.  Variable inlets do not change this.

The ramjet depicted is a supersonic design with a minimum operating Mach number of 2,  which happens just as the vertically-launched spaceplane is leaving the sensible atmosphere somewhere above 100,000 feet.  A subsonic design that could ignite somewhere around Mach 0.7 and burn to about Mach 2-2.5 usefully,  but would have about half to two-thirds the listed impulse capability,  which renders it infeasible.  At altitude,  the frontal thrust densities are also completely infeasible,  unless these were staged-off strap-ons very much larger than the spaceplane’s fuselage.  It is staging we are trying to get away from here!

Neither gas turbine design has the frontal thrust density to take off vertically at all,  so this kind of propulsion would also have to be gigantic strap-ons that get staged off.  Not feasible by definition.

The basic message here seems to be that the airbreathers are very probably not very useful for vertically-launched fast ascent trajectories if no staging is allowable.  They might well be useful for a horizontal-takeoff,  depressed-trajectory design,  at the cost of enormous drag losses.  But that is a different scenario! 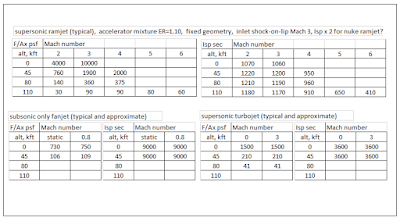 A nuclear ramjet is no better:  although its effective specific impulses are higher (you need to look at air specific impulse instead of fuel specific impulse to compare fairly,  the fuel air ratio embodied in the chemical ramjet data is .074),  the frontal thrust density is no better than the chemical ramjet.  It may well be worse due to the impact of a very heavy core on engine sizing.  Plus,  its exhaust stream is intensely radioactive,  based upon the Project Pluto nuclear ramjet ground tests decades ago.

The best-guess estimates for scramjet characteristics are given in Figure 4.  These are impulse and frontal thrust densities similar to ramjet,  but achieved only at Mach numbers larger than 4,  the utter-minimum takeover speed.  These Mach numbers are simply incompatible with the vertical launch scenario.  The impulses look marginally-attractive in a narrow range of speeds,  but the frontal thrust densities at stratospheric altitudes are infeasible.  Going nuclear does not help the fundamental incompatibility  of a very high-speed airbreather on this trajectory.  Where the vehicle reaches these speeds,  there is no air! 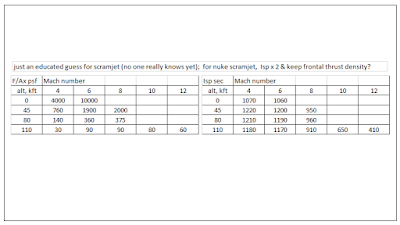 So,  there are only two known propulsion concepts that could support a vertically-launched single stage spaceplane with operating characteristics of an airliner.  One is the “nuclear light bulb” version of the gas core nuclear thermal rocket,  which likely could support payload fractions around 5-10%,  if it actually existed,  which it does not.  What that really says is that this “nuclear light bulb” engine ought to be a major development priority.  It is not.

The other is nuclear pulse propulsion,  which would only work in vehicle sizes far beyond anything ever before constructed,  and at the social cost of uncontained nuclear explosions in the atmosphere.  The EMP is probably actually more dangerous than the radioactivity,  but the radioactivity will be the political killer of this idea.

So that leaves only the “nuclear light bulb” as a feasible propulsion for this kind of spaceplane.  But for vertically-launched fast ascent,  this looks to be entirely feasible.  Which means that its mythical engine should be a high-priority development.

The only other approach to a single stage spaceplane to orbit would be a horizontally-launched craft with a depressed trajectory to make airbreathers feasible for a small portion of the ascent,  trading their impulse advantage against the enormous drag losses of flying fast down in the atmosphere.  The last program to attempt that approach was X-30,  which failed.  (It is very difficult to do realistic estimates for that kind of trajectory,  unlike this scenario.)

PS:  The ramjet data were obtained with my latest version of the high-speed range cycle codes for sizing and performance.
Posted by Gary Johnson at 4:01 PM