Currently-flying Spacex rocket launch vehicles include Falcon-9 and Falcon-Heavy,  although Falcon-Heavy has only completed one demonstration flight so far.  Falcon-9 has been flying for some time successfully.  A quick visit to Spacex's website retrieves what they currently have posted for prices,  payload capabilities,  and shroud dimensions.  Multiple destinations are covered,  only low Earth orbit and trajectories to Mars are covered here.

The ground rules for comparison are the same here as was used in the reference 1 evaluation of SLS capabilities.  The posted "payload" to a destination is taken to be the payload system within the shroud,  which almost by definition must include a custom payload adapter for a custom payload. I assume here (as in ref. 1) that the adapter is 10% of the thrown weight toward the destination,  in this case,  Mars.  The interplanetary trajectory is a min-energy Hohmann transfer orbit.

Further,  the payload must include a lander spacecraft that in turn carries within itself the actual useful payload to be delivered on Mars.  Also assumed is a direct-entry trajectory from the interplanetary trajectory.  Further,  the payload tonnage is large enough that the deep penetration of high ballistic coefficient items is appropriate,  so that chutes are not feasible.  Retro-propulsion is necessary from the moment hypersonics end at about 0.7 km/s speeds.  Altitudes are on the order of only 5 km,  so that impact is but seconds away,  unless retropropulsion is on the order of 3-4 gees. See Figure 1. 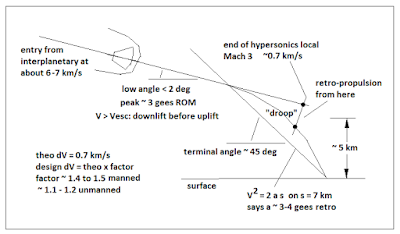 As detailed in reference 2,  a typical direct-entry retro-propulsion lander that is one stage and not reusable,  can have at most a payload fraction of about 50%,  using long-term storable propellants,  such as MMH-NTO. That fraction is based upon the lander ignition mass,  which is also its mass at the beginning of atmospheric entry.  This uses a factored-up delta vee requuirement,  based upon leaving the hypersonics at just about 0.7 km/s.

What that means is you take the published thrown payload mass,  multiply it by 0.90 to deduct for the payload adapter you must have,  to find the mass of the lander at ignition and at entry.  Half of that (multiplying by payload fraction 0.50) is the actual delivered useful payload on the surface of Mars.  The rest is the structure and propellant load of the custom lander design.  Loaded lander mass plus custom payload adapter mass equals rocket vehicle "throw weight" (mass,  really).

Here are the results for the Spacex Falcon-9 and Falcon-Heavy,  flying payloads within the existing shroud.  This shroud is 5.2 m diameter and 13.1 m long overall.

Although it has been recently cancelled,  there was (until recently) an unmanned one-way Mars lander design known as Red Dragon,  derived from the cargo Dragon and crew Dragon designs currently flying or in work.  This would have the advantage of not being a "from-scratch" design,  just a change to existing designs.  It has the disadvantage of being too much spacecraft for the payload carriable to Mars,  so that its payload fraction is low.

This design was characterized fairly well in reference 3.  It presumably has the jettisoned nose cap and solar wing trunk of cargo Dragon,  using a crew Dragon capsule with the seats,  parachutes,  and life support removed,  and cargo racks installed.  This has the larger propellant tank system,  Super Draco thrusters,  and landing legs of crew Dragon.  The trunk is shed before entry,  so that it is the capsule-only that enters,  and all the propellant goes toward the landing.

Reference 3 analyzes landing delta-vee potential vs carried payload mass,  as noted in the augmented weight statement data below.  0.7 km/s is the absolute theoretical minimum,  at 3.2 tons useful payload.  The other values at reduced payload are more practical.  The limitation here is the propellant mass storable in the Red Dragon.  It actually needs more than crew Dragon.  The other advantage here is that no payload adapter is required:  Dragon already fits Falcon-9 and Falcon-Heavy.  But only Falcon-Heavy can send a payload the size of Dragon to Mars.  Thus the full thrown weight could be the loaded capsule plus trunk. 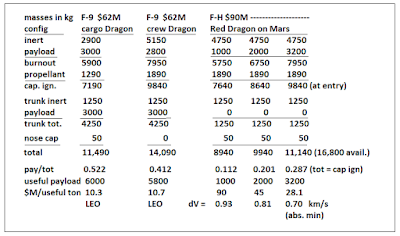 Landing payloads on Mars with Red Dragon avoids needing to develop a custom lander "from scratch".  It does incur low payload fractions,  though,  plus the inconveniece of getting the payload out through the side or nose hatches.  Changing those issues,  or adding more propellant capacity,  are parts of a major redesign effort. Basically,  Falcon-Heavy/Red Dragon,  as conceived before its cancellation,  could have landed 2 useful tons for about $45M/useful ton.

The best and most cost-effective choice is obviously Falcon-Heavy with a custom lander.  However,  that lander would require engineering development "from scratch" while Red Dragon would not.  That takes some years of time to accomplish.  It would very likely be worth increasing the propellant capacity of Red Dragon as well as the useful payload it carries.  About 5 tons of thrown weight capacity to Mars is available to cover those changes.