Payload and Cost-Effectiveness Comparisons to Mars

This article is the comparison among the launchers.

Most of these vehicles are launch rockets that contain a payload system within a protective shroud.  The shroud does not count against the thrown mass onto a min-energy Hohmann trajectory to Mars.  However,  there must be a custom payload adapter,  here assumed to be 10% of the thrown mass. That leaves a net payload mass.  The payload must have a means of landing,  which means part of the net payload mass is a lander spacecraft that can survive direct entry into the Martian atmosphere from the interplanetary trajectory,  plus it must touch down safely.

At the payload numbers obtained here (all over a metric ton),  JPL's experiences with entry,  descent,  and landing (ref. 5) suggest that chutes will not be feasible,  so that a retro-propulsive landing must be attempted directly from the end of aerobraking hypersonics.  Such technologies are already flying (although JPL has never yet used them in this way),  while extendable or inflatable heat shields that reduce ballistic coefficient are not yet flying,  except very experimentally.  See Figure 1. 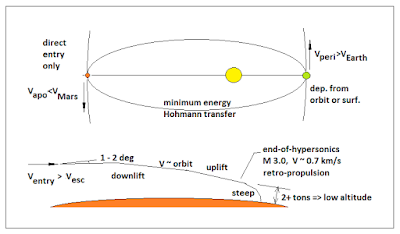 Figure 1 -- Trajectories To and Onto Mars

Such a lander needs long-term storable propellants in order not to have very high inert weights and large excess propellants to make up boil-off losses.  Such a one-shot,  one-way lander would have a payload mass fraction (relative to lander ignition mass) of about 50%.  Ref. 6 shows why this is true.

One exception to this picture is Falcon-Heavy delivering payload to the surface via the now-cancelled Red Dragon concept.  Such has no payload adapter,  but the payload fraction of Red Dragon is low,  because the spacecraft is entirely too robust for the load it can land on Mars.  It really needs larger propellant tanks to be more attractive.  Because of the cancellation,  this issue is most likely moot. Dragon-related data are given in ref. 7.

The other exception is the Spacex BFR system,  which is still in the very early stages of development.  Only its Raptor liquid methane / liquid oxygen engines have had a lot of ground testing so far.  This concept carries its payload internally inside a second stage that is also the aerobraking-and-retropropulsion lander spacecraft.  The thrown payload masses need no correction.  But this system requires on-orbit refilling to leave low Earth orbit.  The best current estimate is 6 tanker flights to fully refill one interplanetary-bound second stage spacecraft.  That was found as part of ref. 8.

Bear in mind that the per-launch prices for SLS and BFR are nothing but best-guesses. The notation "m.ton" stands for metric ton,  and "MF" for the lander mass fraction payload/ignition.   Data: 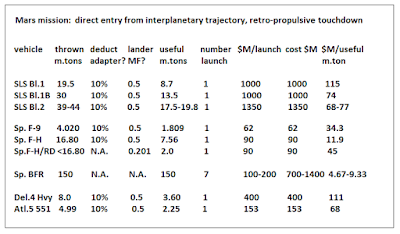 So Of What Use Is All of This?

This is the last of a series of articles in which I estimated or determined the relevant numbers for several,  but by no means all,  possible launchers,  for the very specific mission of direct-entry landing payloads on Mars.  Anyone actually using these methods will need data for all potential launchers,  not just those few documented here. Similar methods using different numbers would apply to other destinations,  such as the moon,  or even various Earth orbits.

There are two things data like these can tell you.  First and most straightforward,  is selection of an existing launcher that can do the mission without paying too much for it. Second,  what launcher design concepts might be most worthy of future use or development?

For the launcher selection problem,  the most relevant data are simply payload deliverable to the surface of Mars,  and the launch price you will pay for using it.  The best methodology is the simplest:  from the list of all possible launchers,  cross out all which cannot land on Mars the payload mass you want.  Then from among those remaining candidates,  look for the lowest launch price.

In practical terms,  you will need a reliability ranking as a second screening tool to cross out the unreliable vehicles.  And,  you will need to select one or two back-up candidates to pursue,  if your "best" candidate cannot be had.

The second problem of which designs deserve continued use or development,  would best be analyzed with the cost-effectiveness ratio,  which is a part of the data given here,  in the form of cost per delivered useful ton of payload.  That ratio is a cost/benefit ratio,  under the assumption of flying the vehicle at its full payload capacity.  The lowest cost per delivered useful ton is the "best" choice,  because as long as the payload tonnage will accomplish any mission at all, the lowest cost/benefit ratio does that mission the cheapest way.

If you don't fly full capacity,  you have to ratio-up the cost/benefit numbers:  flying at half the max payload system mass doubles the cost per delivered ton,  flying at one third of capacity triples the cost per delivered ton,  etc. This is the way to see technologies and design approaches that are getting too obsolete to be competitive in a market environment: too costly.  It is not constrained by either deliverable tonnage or reliability.