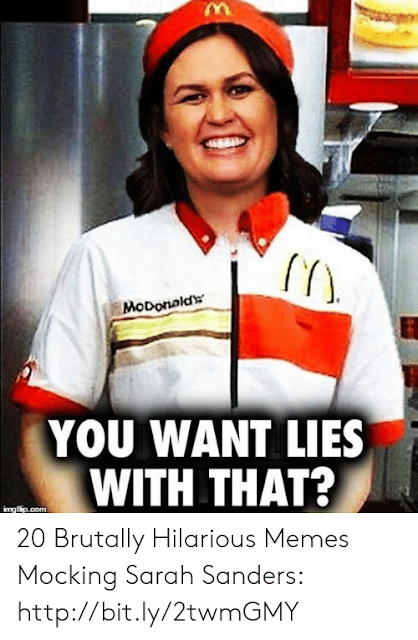 Mr. Trump has already announced her successor as press secretary.  Although the following might have been a better choice: 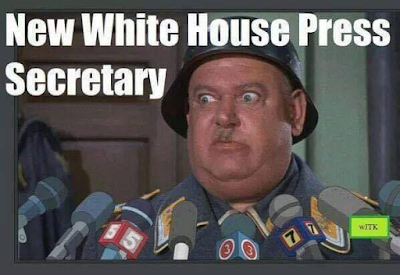 I got these pictures from my wife,  who found them on Facebook,  I believe it was.  That concludes the “fun stuff” part.  For those interested in the “idiocy in politics” part,  read on.

If you want to know why I used the term Prevaricator-In-Chief,  then here is one of many AP fact check articles,  as posted on the PBS NewsHour website.  The highlighting is mine.

AP fact check: The silent partner in Trump’s boasts
Nation Jun 22, 2019 2:48 PM EDT
WASHINGTON — President Donald Trump has a silent partner behind several of the accomplishments he likes to boast about: Barack Obama.

THE FACTS: Executing children is already a crime.
Trump is offering here a somewhat toned down version of a distorted story he’s been telling for months that falsely suggests Democrats are OK with murder.
His account arises from extremely rare instances when babies are born alive as a result of an attempted abortion. When these cases occur, “execution” is not an option.
When a baby is born with anomalies so severe that he or she would die soon after birth, a family may choose what’s known as palliative care or comfort care. This might involve allowing the baby to die naturally without medical intervention. Providing comfort without life-extending treatment is not specific to newborns. It may happen with fatally ill patients of any age.
___
VETERANS
TRUMP: “We passed VA Choice. …They’ve been trying to get that passed also for about 44 years.” — Orlando rally.
THE FACTS: No, Congress approved the private-sector Veterans Choice health program in 2014 and Obama signed it into law. Trump signed an expansion of it.
___
RUSSIA INVESTIGATION
TRUMP: “I’m the most transparent president in history. I let Mueller have everything they wanted.” — Fox News interview Wednesday.
THE FACTS: It’s highly questionable to say Trump was fully cooperative in the Russia investigation.
Trump declined to sit for an interview with Robert Mueller’s team, gave written answers that investigators described as “inadequate” and “incomplete,” said more than 30 times that he could not remember something he was asked about in writing, and — according to the report — tried to get aides to fire the special counsel or otherwise shut or limit the inquiry.
In the end, the Mueller report found no criminal conspiracy between the Trump campaign and Russia but left open the question of whether Trump obstructed justice.
According to the report, Mueller’s team declined to make a prosecutorial judgment on whether to charge partly because of a Justice Department legal opinion that said sitting presidents shouldn’t be indicted. The report instead factually laid out instances in which Trump might have obstructed justice, specifically leaving it open for Congress to take up the matter.

*** re:  TAXES --  to what is written I would only add that a variety of sources confirm that most of the tax benefits went to the giant wealthy corporations instead of the middle class and poor individuals,  to whom it was promised by Trump.

This AP fact check is quite typical of all that I have seen.  The pattern is chronic lying in order to look good to his true believer supporters,  with the claims having little bearing on reality.  Nearly 100% of what Mr. Trump claims is false.  That is his track record.

All presidents do both good and bad while in office,  that is only human.  What we all want is a president who does more good,  than bad,  for us.  Chronic lies are not good for the country,  they do us damage,  in a myriad of ways.  So,  of what benefit is a “Prevaricator-In-Chief” in the White House?  How many more years must we suffer with this?

He's not the only liar in DC.  But he is the worst one.