Final Update 11-17-20:  Yesterday I closed the deal to sell this plane to a new owner.  He will take excellent care of it,  and put it to a useful purpose training student pilots.  That was very important to me,  as this plane has enormous sentimental value.
----------
In a posting dated 18 January 2014 and titled “Super Red-Letter Event”,  I described inheriting my Dad’s plane and learning to fly in it.  In the last couple of years,  I have had some serious health problems that prevented me flying,  culminating in a mild stroke that has effectively ended my flying.

This aircraft needs to be flown,  it will deteriorate if just left in storage.  It really needs an owner who can take full care of it,  which inherently includes flying it,  something I can no longer do.

This aircraft is truly a vintage craft;  I typically referred to myself flying it as the “antique flying the antique”,  but it is not worn out!  It is a strikingly-classic design,  and draws very positive comments from observers quite often.  That rounded vertical tail is nothing at all like anything you can buy today.  That really attracts attention,  not to mention it being a tailwheel design.

It is fun to fly,  and easy to fly,  although you must be tailwheel-qualified to fly it (something rare today).  Tailwheel instructors are also now rare,  but they all claim a tailwheel-qualified pilot is actually a better pilot,  precisely because he/she must actively “fly” the plane,  even on the ground,  from the time the prop starts turning,  until it stops turning back at the hangar.  I agree with that opinion.  It’s not hard,  but it does demand very close attention to everything,  even on the ground.  Especially the wind.

This isn’t modern high-speed flying glued to a “glass cockpit” that does almost everything for you.  It is flying as it was done well over half a century ago:  looking out the window and using a real chart and a VOR to navigate,  all the while monitoring round dial-type gauges on the instrument panel.  It’s not hard,  but you need practice at it,  to do it effectively in the air.

Your piloting skills actually stay sharper if you fly that way.  This is real “stick-and-rudder” stuff!  Yet this particular plane flies fast enough to be attractive for travel:  it cruises near 110-115 mph.  Day VFR / “stick-and-rudder” is easy in it,  and the most fun of all.

Below is my writeup (complete with a photo) describing this airplane for prospective buyers.  If this kind of flying appeals to you,  and you might want to buy this plane,  do please contact me.  I put the contact data in the writeup.

4-Seat “Old-Time” Cessna for sale.  Owner can no longer fly due to health issues.  This aircraft needs an owner that can fly it,  so that it does not deteriorate just sitting in a hangar.

Aircraft has been hangered all its life since being rebuilt from salvage with a new engine at an estimated 2200 airframe hours,  and returned to flight in 1983 (logs date from then).  All metal wing,  3-position flaps,  dial-type gages on instrument panel.  Cruises at about 115 mph.  Easy to fly.  Insured for $41,000 with Avemco (their professional minimum valuation).

Aircraft was flown less than an hour,  in a short ferry flight,  since that last annual.  Stored in T-hangar at McGregor airport ever since,  and also hangered ever since current owner took possession.  Was also always hangered before that,  dating back to its rebuild and return-to-flight.

Aircraft has proper radio,  VOR,  and transponder,  but lacks ADS-B “out”,  which is soon-to-be-required for operation near towered airports from 2020-onward (there are now less-expensive solutions for this).  Will need a current annual to return to flight. 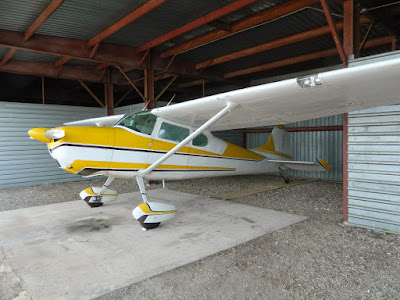 
Looking at some recent Trade-A-Plane ads,  asking prices depend on the model year.  The plot following the photo is that Trade-A-Plane data.  That trend says a 1952 model is worth just about $50,000,  “all else being equal”.  The pluses and minuses are a “wash”,  so all else really is equal,  or better.  Therefore $50,000 is my asking price.  The minimum I would consider is the insurance evaluation $41,000. 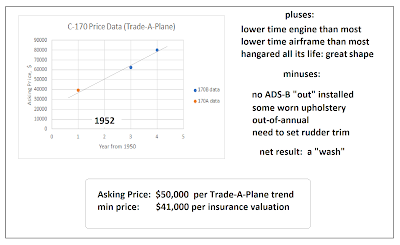