I have gotten involved with some friends on the New Mars forums discussing what might be appropriate for very large colonization ships.  This kind of mission demands the delivery of very large payloads.  Doing this effectively requires a reusable ship.  That means you stage off (or jettison) nothing.

It is easy to run a rocket equation-based trade study that assumes a one-stage round trip,  that jettisons nothing.  Making it carry the same large payload on the return voyage simplifies the analysis,  but very likely over-penalizes the design.  But at this level of analysis,  that really doesn’t matter.

Update 9-13-19:  there is more than one kind of nuclear thermal rocket.  I took a closer look at 6 different nucear thermal rocket approaches,  and in a more nuanced way,  in "A Closer Look At Nuclear Thermal",  dated 9-13-19,  this site.

The spreadsheet inputs are highlighted yellow.  Payload delivered is common to all the designs,  and actually arbitrary,  but I thought 2000 metric tons might go a long way toward the beginning of a colony.

Inert fractions vary with the propulsion selection.  I used data from Ref. 1 to set a realistic guess for the inert fraction,  of the nuclear explosion drive.  It is very high,  reflecting the massive pusher plate,  two-stage shock absorption system,  and the armored hull.

The Hall effect ion drive is based on existing Busek satellite thrusters already in service,  and modified to “burn” iodine,  something plentiful,  cheap,  and storable at low pressure.  Getting to an acceptable vehicle acceleration requires a very large thruster array and a nuclear power source in the multi-megawatt range.  I just guessed the inert mass fraction that might cover this.

Because of the heavy reactor core and low engine thrust/weight achieved in the old NERVA nuclear thermal rocket development effort,  I used twice the typical chemical stage inert fraction as a “good guess” for the nuclear thermal inert mass fraction.  There is good data about this engine in Ref. 2.

Delta-vees for the Mars trip are for departing and arriving in low Earth orbit to/from a min-energy Hohmann transfer ellipse,  plus the corresponding delta-vees for arriving into and departing from low Mars orbit.  The same applies to the Ceres transfer,  except that the ship just matches Ceres orbital velocity about the sun instead of entering a “low orbit”.  This would be typical of many small main belt asteroids.

All these dV’s were summed,  as required to do the entire mission single-stage.  The total orbital delta-vee (dV) to and from Mars is 3.84+1.83+1.83+3.84 = 11.34 km/s.  Impulsive-burn options need supply only that summed delta-vee with zero gravity and drag losses.  Long-burn ion must supply a lot more than that,  due to very large planetary and solar gravity losses.

All but the ion option were considered as "impulsive burn" and Hohmann min energy transfer,  with vehicle acceleration exceeding 0.1 gee to enforce that.  These used the unfactored sum of orbital dV's to and from Mars (orbit-to-orbit transport) as the mass ratio-effective dV for the rocket equation.  The spreadsheet input is factor equal to one.

The ion option must spiral-out and spiral-in at the planetary orbits,  and accelerates to midpoint then decelerates to arrival on the transfer trajectory (a patched spiral about the sun).  Propulsion is sized for 0.001 gee to ensure that this kind of transfer is feasible.  To account for the planetary and solar gravity losses of the resulting months-of-burn,  I just doubled the orbital dV sum to 22.68 km/s.  For the spreadsheet,  this is factor equal to two.

For Ceres,  Earth departure and arrival dV is 5.24 km/s.  The orbit-matching dV at Ceres (arrival and departure) is just about 3.49 km/s.  That round trip sum is 17.46 km/s for all but the ion drive option,  unchanged by factor equal to one.  Using factor equal to two for ion drive,  that mass ratio-effective total is 34.92 km/s.

All 5 designs carried exactly the same 2000 metric tons of dead-head payload,  an arbitrary selection perhaps appropriate for a colony-type mission.  (I did not look at how to get that payload up to LEO,  or down from LMO,  that issue would be the same for all the candidates.)  This was done for Mars in a spreadsheet worksheet,  whose image is Figure 1.  All figures are at the end of this article.

Sum the round trip delta-vees,  and factor the sum for the mass ratio-effective delta-vee required of each propulsion type:  required dV = (factor)(sum of all 4 orbital delta vees),  where factor = 1 for impulsive propulsion (acceleration exceeding 0.10 gee),  and factor = 2 for long-burn ion propulsion (0.001 gee required).

Calculate the mass ratio required:  MR = exp(dV/Vex),  with both velocities in km/s

Input the delivered dead-head payload Wpay,  metric tons (arbitrary,  but should be realistic)

The nuclear explosion drive offers the lowest ignition/payload ratio going to Mars at 2.56:1,  based on the old 1950's shaped-charge fission device technology.  This would be a very tough ship design,  probably usable for a century or more,  and likely tough enough to aerobrake,  reducing the load of bombs in favor of more payload.  Its stout hull and huge pusher plate are effective radiation shields.

The ion propulsion offers the next best ignition/payload ratio going to Mars at a very comparable 2.76:1,  which to be practical would require its thrusters operating on something cheap,  plentiful,  and storable-as-a-condensed-phase (at very low pressure),  like iodine.  This would be a relatively gossamer structure unable to survive aerobraking,  and it would likely also have a limited service life.  Radiation protection would have to be added.

Two of the others (nuclear thermal and LOX-LH2),  while theoretically feasible,  are nowhere close in ignition/payload ratio going to Mars.  These are unaffordable “Battlestar Galacticas” for any reasonable payload delivery aimed at colonization.  And the storable chemicals are just infeasible in any sense of the word for a Mars colonization ship,  simply because there is a negative payload fraction available,  once propellant fraction has been determined,  and with a suitable inert fraction input.  It simply cannot do the mission single stage.

I think you can look at the ignition/payload mass ratio to judge whether-or-not a given propulsion system might serve as a practical way to build a colony ship.  This value needs to be no more than about 5 or thereabouts,  in order not to build an unaffordable “Battlestar Galactica”.  This is a “fuzzy” boundary,  dependent upon how much you think you can afford.

The same sort of analysis applies to other destinations.  You just need an appropriate list of orbit-to-orbit delta-vees,  and the same list of realistic guesses for inert fractions.

Results for Ceres:  I added a worksheet to the same spreadsheet for a colony-type ship to Ceres,  as “typical” of the asteroid belt.  Those spreadsheet results are shown in Figure 7.  Figures 2 – 6 also show the Ceres results (as well as the Mars results).

The same general outcome choices obtain for Ceres as for Mars:  your nuclear explosion drive ship is quite robust,  promising a long service life,  while the ion ship is rather flimsy.  For this main belt asteroid application,  the ignition to payload ratio is also substantially more favorable for the nuclear explosion ship  (2.97),  vs the ion ship (4.87).

The trend here is clear:  the further out you go with a single-stage,  round-trip colony ship,  the more the ignition/payload ratio is going to favor nuclear explosion propulsion as the more affordable option.  Radiation protection needs will also favor the shielding effect of the stout hull required of the nuclear explosion drive.  Bigger also favors ease of incorporating spin “gravity”. 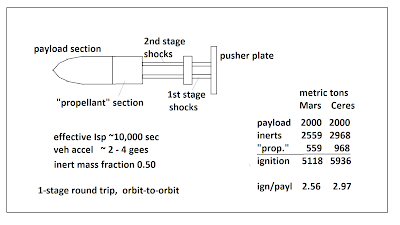 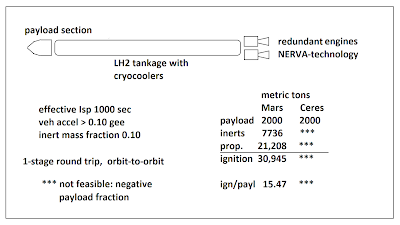 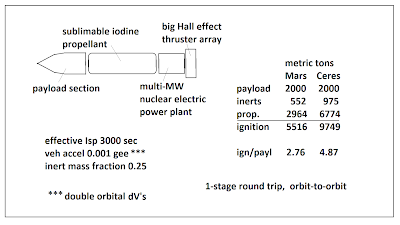 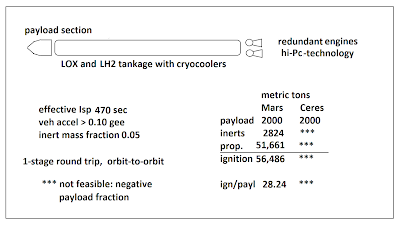 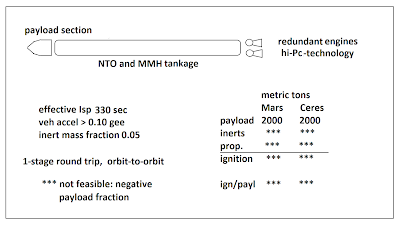