The image speaks for itself.  Sorry about the language,  but this is the most concise and precise way to say this. 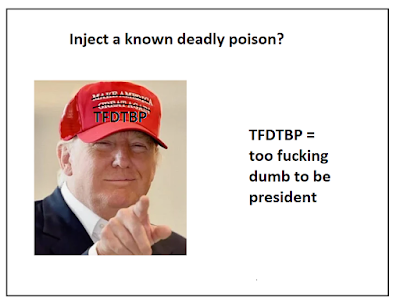 After Mr. Trump's exposition of the notion of injecting or ingesting known-fatally-toxic disinfectants to "cure" Covid-19 disease,  the phone numbers for poison control around the country have fielded a lot of calls about this topic!  And,  the makers of those disinfectants have felt compelled to issue warnings NOT to ingest or inject these materials!

Science very clearly says DO NOT DO what Mr. Trump suggested!  In matters of science,  he is quite clearly far dumber,  than the average fence post.

Mr. Trump now claims he was being "sarcastic" when he suggested that,  but the video footage of him suggesting this to Dr. Birx very simply denies that claim.  Period!  End of issue!  It is quite clear he will not admit to making a very serious mistake.  Especially one that would be fatal to those who might follow it.

Add to that the recent absence of Dr. Fauci from the White House briefings.  (Update 5-2-2020:  the White House has blocked Fauci from testifying before Congress!)  Fauci has contradicted Trump's ignorant lies on multiple occasions,  accompanied by shouts of "fire Fauci" from Trump's most ardent supporters.  Is anyone in their right mind now surprised by that absence?

OK,  I understand that Mr. Trump's most ardent supporters are also deniers of science in multiple arenas.  That much is quite clear from their positions on climate science and on the dangers of pollution,  versus what humans might really be able to do.  Perhaps that disparity is to the advantage of the country as a whole.

Applying the epithet "Branch Covidians" to his most ardent supporters,  then perhaps letting them kill themselves,  by injecting or ingesting bleach and isopropyly alcohol,  or by defying quarantine,  is actually appropriate.  That way,  there are fewer of them left,  come November,  to vote for him.  Death cults do,  in fact,  lead to death.   And Mr. Trump's most ardent supporters do indeed qualify as a death cult.

If you want to know why I say that (meaning the danger of glorious-leader death cults),  then peruse the article "Beware of Leader Cults",  posted 2-13-2020,  on this same site.