In recent weeks,  there have been several columns published in the Waco,  Texas,  "Trib" newspaper about protesters and rioters.  These include the Gordon Robinson column awhile back,  and several more since,  including more than one,  in just one edition alone (Sunday 9 August)!  Surprisingly enough,  there are certain elements in all of these that I do in fact agree with,  despite the apparent drastic disagreements among columnists.

There is very definitely a difference between a protestor and a rioter!  The “molotov cocktail” is just one of those differences.  That being said,  the heightened emotional tension during recent protests in the streets makes it very easy for a protester to be induced to stray across that line into rioting.  This is the long-known psychological reason behind the easy formation of lynch mobs.  It would be well to remember that! 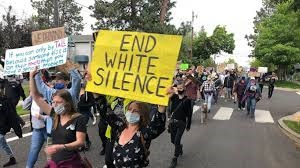 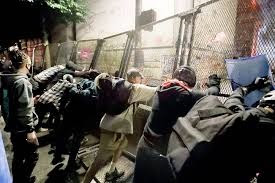 The fact that a protest exists is trying to tell you that there is some problem needing to be solved!  Unless there is such a problem lacking solution,  there is NO need for a protest!  Simple as that!  We can always differ and argue about what those solutions might be,  but it is totally illogical to deny that there is a problem to be solved,  when folks are protesting.

The right thing to do is to understand what that unsolved problem is,  so that you can start developing proposed solutions to it.

When solutions are being developed and debated,  the fundamental reason for protesting starts going away.  Thus the protests begin to abate,  and with them,  the risks of riots.  This is not perfect or immediate,  but it is simple enough to understand.  No matter who you are,  or what your politics might be.

All that being said,  there are political opportunists who prefer to make the problems worse,  not better.  These are the people you do NOT want to listen to!  They exist on both sides of the political spectrum.  The more extreme they are,  the more likely they are to do or say something to cause harm.  Barry Goldwater in 1964 was dead wrong:  extremism is bad,  no matter what!

Which makes you wonder just what fraction of the arsonists and looters seen in the current civil rights protests were actually far-right extremists masquerading as far-left extremists,  doing damage so as to discredit the generally-honest protestors?  That is a very good question!  I have seen many things debated about these protests,  but not that "false flag" issue.  Yet it seems to be a very real thing (read on).

Look again closely at Figure 2.  Many of the people breaking down the fence at the federal courthouse in Portland are white-skinned,  not black- or brown-skinned.  In fact the only skins that can be seen are white!

Now look closely again at Figure 1.  Not all the skins that can be seen are white!  Those in the foreground are,  but look closer into the far field!  Many there are black or brown.  About what you might expect in a national population that is mostly white,  but with a significant black minority,  and a significant brown minority.

Now think for yourself!  Could the difference in skin color count between Figure 1 and Figure 2 be right-wing extremists infiltrating the protests,  to give the more-or-less left-wing protesters a bad name,  by doing (or starting) the rioting,  arson,  and looting?  If you are honest with yourself,  you have to admit that this really could be true!  It’s right there in front of your eyes!

The other thing I haven't seen very much of, in the current public discussions,  is the issue of attitudes versus behaviors,  when it comes to racism.  You can regulate behaviors with laws,  but generally not attitudes,  which are passed-on in-private from parents to children.  (This is the real problem we have had since the Civil War!)  Yet it is attitudes that comprise the racism that previously enabled the centuries of overt owning-people slavery in our culture!   If you are honest with yourself,  you have seen this attitude thing just as I did,  as a child.  It never went away.

There is the overt institutional slavery of owning other human beings.  This was outlawed in America as a result of the Civil War.  But there are other kinds of slavery:  the repression we call "Jim Crow",  and also for-profit wage slavery.  I remember seeing "Jim Crow" when I was a boy,  and I am glad to see it mostly (if not entirely) gone.  What remains of it,  is what is being protested:  it costs lives needlessly.  That is just unacceptable.

Wage slavery is something most all of you should be familiar with,  at one level or another.  Which is why I find it so surprising that so many of you have been on the side of "union-busting" for so many decades,  when collective bargaining has been the most effective (even if somewhat-flawed) tool we have had,  against wage slavery,  for well over a century-and-a-half now.  But that's another story.

What's missing in the current protest scenario is distinguishing between protesters and rioters,  and responding appropriately.  Too many rioters are being given a "pass" to burn and destroy.  Too many honest protesters are being abused,  or kidnapped,  by unneeded federal troops,  or over-reacting police.  Too much of this has been politicized as "either my way or the highway",  and not enough attention paid to solving the very real problems these protests have identified.  And THAT is what I object to!

See Figure 3.  This is a US Navy veteran being gassed by police while not doing anything,  not even moving.  Seconds later,  he was beaten severely with batons,  all the while not resisting in the slightest!  We all saw the video footage of this on the TV news,  however it might have been labeled or explained.  This was utterly appalling! 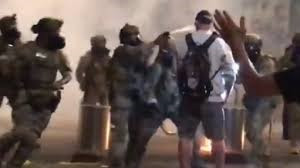 THIS is a prime example of police over-reaction!  Why should it surprise anyone that protesters might respond to such violence,  with violence of their own?  That,  too,  is human nature!  Yet it all can be avoided,  if one simply understands the difference between protestors and rioters,  and responds appropriately.

Even so,  sometimes people respond in unexpected ways!  There was a protestor in Portland,  Oregon,  often termed “Naked Athena”,  who did not respond with violence to police violence in Portland.  Indeed,  she actually seems to have reduced the violence!

Figure 4 is a photo of her in action.  “Naked Athena” was wearing only two articles of apparel:  a stocking cap and a covid mask,  which can be seen in other photos taken of her.  Considering the violence going on around her,  I find that she showed consummate bravery!  I don’t care what her politics were.  She deserves commendation for extraordinary bravery!

It depends upon the source you get this from,  as to whether her actions are deemed positive or negative.  Some sources refer to her as a “crazed Antifa terrorist”.  Which is utterly ridiculous!  How is reducing violence “terrorism”?  It is not.

Be aware that your “favored sources” may be lying to you in that way!  I see an awful lot of such lies,  from both ends of the political spectrum!  So,  think for yourself! 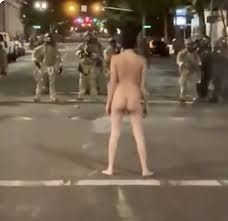 We’ve seen enough violence on both sides of this!  It needs to stop!  So,  my message is simple:

#1.  There is a difference between protestors and rioters.  You have to deal with them differently.  So,  learn the difference,  and just get on with that!

#2.  When there is protest,  there is something wrong that needs to be fixed.  So figure out what that is,  and just FIX IT!

My fellow citizens,  this stuff has to change!  Most of your current politicians clearly won’t act effectively.  Your most powerful tool is your vote!  Please use it!  Wisely!

That being said,  if you do not trust the post office to get your mail-in ballot where it needs to go on-time,  then vote in person!  There are ways to do that safely,  even in a pandemic!  (I will cover that in another post.)

Update 1-8-2020:  In response to the comments to this article (below) about whether the far left or the far right might present the greater terrorist threat,  note that today some 13 far-right persons from two separate groups have been arrested and charged with planning to kidnap (and "try for treason" the governor of Michigan,  who happens to be a Democrat who took Covid-19 seriously,  and has imposed some quarantine measures to fight the spread of the disease.

These people hated those quarantine measures,  among other things.  6 are facing federal charges,  and 7 are facing state charges.  The FBI broke this one.  They are radical right wingers,  charged with intending to commit a terroristic event.

A right-wing Q-follower tried shoot up a pizzeria in NYC to "save the children from the pedophile ring operating in the basement",  per what the Q community believed;  when that pizzeria physically didn't even have a basement.  A right-winger hit and killed a leftist with his car in Charlottesville.  Several in the news media have noted the presence of outsiders,  not associated with the protestors,  committing or fomenting the violence associated with the civil rights protests.  Multiple black males,  all unarmed,  have recently died in police custody.  And now this:  right-wingers wanting to kidnap state officials they disapprove of,  and perhaps "try" them for treason.

Looks to me like the FBI is quite correct in its recent assessment:  the worst domestic terrorist threat comes from the far right,  not the far left.  I don't like extremists of either stripe,  but the greater threat is so very clearly coming from the far right.