I looked at a very simple adaptation of the Spacex Falcon-9 booster landing legs scaled up and adapted to the Spacex Starship,  in Ref. 1.  I did this adhering to the criteria outlined in Ref. 2.  The results met the criteria for clearance skirt-to-ground,  and for the worst-case total landing pad area as driven by the Mars takeoff scenario,  with a center-of-gravity height to stance ratio very near to satisfying that criterion.  It featured a hinge location at the edge of the aft skirt,  much like on Falcon-9.  I now call this "Concept 1".

However,  dimensional feasibility of the hydraulic cylinder required to extend and retract the legs led to a mid-span attach point on the leg.  That in turn led to a large bending moment in the leg near that attachment point,  with the requirement for a rather large section modulus.  The hydraulic cylinder itself was driven to very high pressures at a rather large piston diameter by the force required to hold the leg extended under the applied loads.  Accordingly,  I wasn't pleased with this design concept,  as was indicated in Ref. 1.

Hinging at the top of the leg instead did not really help,  as the cylinder attach point cannot be near the end of the leg,  which must then be extended to get the ground clearance.  That left me with bending moment and section modulus problems,  as well as a limited stance dimension that failed to meet stability requirements.  That approach I abandoned as no better than the bottom hinge design,  and quite likely worse.

Therefore I looked at moving the leg outward and downward on two link bars as illustrated in Figure 1 (see below at end of article).  This produces a rectangle of the two link bars,  the side of the ship,  and the upper part of the landing leg.  The remainder of the leg extends below the rectangle and below the ship aft skirt.  Its vertical orientation eliminates bending in favor of simple compressive loading.  All this is shown in the figure.

The hydraulic cylinder that extends and retracts the leg becomes a diagonal member in this geometry,  as illustrated.  It is relieved of most stroke versus retracted length limitations,  and is a tension member,  not a compression member.  It extends the leg by retracting its rod.  That rod can include a coil spring-over-shock absorber as part of its length,  as shown.  That directly addresses the need for shock absorption identified in Ref. 2,  unlike Concept 1.

The difficulties with this geometry are too much ground clearance under the aft skirt,  and too little capability for stance relative to center-of-gravity height.  Although,  the height/stance ratio (and landing pad area) is much better than the Starship prototypes currently flying in tests,  with the 6 small,  stubby legs.

The pad fold-out mechanism illustrated here in the figure could be applied to the Concept 1 design as well.  The pad is carried inside the leg,  slides down as the leg extends,  then rotates roughly 90 degrees to the touchdown position.  Very low forces are required for these motions,  which could be light spring forces.  There is essentially zero hinge moment at pad center,  and the bending in the pad itself is around 4 times lower than the Concept 1 values.

Included in the figure is a sketch of the free body diagram (FBD) that I used to determine the pin reactions,  and on which I included the member forces from a two-dimensional truss analysis by the method of joints.  There is also a plan view sketch of the footprint,  showing the pad span and stance dimensions for the 6 legs.  The ratio of stance to span is 0.866 for 6 legs;  for 4 legs it is 0.707.

This is not a bad design,  although it fails to fully meet the height/stance criterion set out in Ref. 2.  One could reduce the clearance height by not folding out fully to the side,  although this also reduces stance further.

Alternatively,  one could angle the legs outward at their tips by using link bars of unequal length (shorter on top,  longer at the bottom).  That would put bending moments (and required higher section modulus) requirements back on the legs.   However,  it would simultaneously buy a wider stance and a lower aft skirt ground clearance.

Achieving the design goals versus incurring leg bending difficulties is an inherent design tradeoff the Spacex designers can make.  Concepts 1 and 2 sort-of bound this design tradeoff space:  Concept 1 having legs mostly loaded in bending,  while concept 2 has legs loaded only in compression. 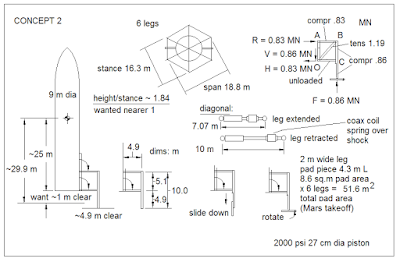