One Concept for Landing Legs

This article extends the landing leg-sizing sub-topic of the article titled "Evaluations of the Spacex Starship/Superheavy",  dated 15 May 2021,  on this site.   I have also updated that article to show this one in its list of references.  You can also find a reference to the soil mechanics data in that article as its reference 11.

I looked at a basic,  straightforward concept for landing legs for the Spacex Starship.  The idea is based on the Falcon-9 booster landing legs,  modified to replace the one-shot extension tubes with a hydraulic cylinder.  The idea is to hydraulically extend the legs for landing,  and then hydraulically retract them after launch.  Falcon-9's leg design cannot do that retraction after launch.  This concept is sketched in Figure 1 (all figures are at the end of this article).

This concept provides a ready means to get clearance between the surface and the aft vehicle skirt to protect the engine bells from debris damage.  It also provides a very-ready means to obtain a wide stance (for the landing pad polygon) relative to vehicle center of gravity (cg) height,  for robust stability on rough,  uneven,  and significantly-sloping ground.

The actual landing pads must also fold out so that a large pad bearing area can be obtained.  I looked at the hydraulic cylinder location and sizing to fold out the legs,  but not at the pad fold-out mechanism details.

The idea was to mount legs to the aft surfaces of the Starship vehicle.  Those on the windward side would have a coating of heat shield tiles on the outer surface,  with the skin underneath the leg bare.  Those on the leeward side could be bare,  like the leeward skins.  The windward legs thus become part of the Starship windward side heat shield.  Hinge line was at the aft skirt,  with fold-out pads mounted on the inside surface of the legs.

The "trick" with rough field overturn stability is a cg height/stance ratio near 1,  as demonstrated to be successful by several lunar and Mars probes,  and by the lunar lander used during Apollo.  Stance is the minimum dimension across the polygon defined by the centers of the landing pads.  If the vehicle weight vector (in three dimensions) falls outside that polygon for any reason whatsoever,  the vehicle topples over,  with fatally catastrophic results.  If it falls within the polygon,  it will not topple over.  This is basic statics.

While this data is primarily for foundation design in Earthly civil engineering,  it also applies directly to the spacecraft landing pad design problem.  The regoliths on the moon and Mars resemble nothing else so strongly as they do "loose fine sand".  For the static problems of after-landing and before-takeoff,  you may not exceed the allowable bearing pressure,  because of the long exposure times to the applied load.  There is time for settlement and compaction to occur.   For the transient of touchdown with factored-up weights,  you may use the ultimate bearing pressure,  because the soil does not have time to fail by settlement and compaction.  It instead fails by direct penetration.

If you have no soil strength test data (and we do not,  for the moon or Mars),  then you use the minimum strength for the reported range of strengths,  for the soil type (in these off-world cases "soft fine sand" at 0.1 to 0.2 MPa allowable means you use 0.1 MPa).  For Earthly abort landings,  you will not be able to pick your touchdown location,  which means you must deal with the possibility of landing on "soft fine sand" or "soft clay" (0.1 MPa allowable),  both of which share the same low allowable bearing pressure in the absence of actual on-site test data.  Mud flats are even worse.

There is the static weight of the vehicle bearing down on the soil after landing.  There is vehicle weight multiplied by a dynamics factor as the applied force during the transient of touchdown,  and,  there is another dynamic factor applied to static weight that accounts for hitting on one leg first,  when the ground is uneven.  Weight at takeoff is higher,  because the fuel tanks are usually refilled for this event,  although this is another static case.   Weight depends upon both mass and the local gravity (at issue here is Earth,  Mars and the moon).

Different things are required of the different mission scenarios.  Starship is initially intended for travel to low Earth orbit and back,  plus suborbital flights point-to-point.  The intended landing place is always a site where there are thick pads of reinforced concrete to support the ship.  But presuming this is always so ignores the very real possibility of an off-site emergency or abort landing!  Most of the Earthly soils are far softer than a concrete pad,  and some are quite soft indeed,  such as sand dunes,  soft clay,  plowed fields,  and mud flats.  You must plan for that.  Eventually,  it will happen.

Eventually,  Starship is to be refilled on-orbit,  so that it may haul payload to the moon or Mars.  Missions to the moon presume no refilling is available there.  Missions to Mars presume refilling on Mars,  in order to enable a return to Earth at all.  Both have surfaces that are dominantly regolith,  which is rocks of many sizes dispersed in a range of sands from fine to coarse,  with no adhesion at all between the sand grains,  or between the sand and the rocks.

There are 9 scenarios to examine,  3 at each of 3 possible landing sites (Earth,  moon,  and Mars).  At each site,  you look at pad sizing for static post-touchdown,  for the transient dynamics of touchdown,  and for static pre-launch.  The two static cases use allowable bearing pressure,  and the dynamic case uses ultimate bearing pressure.  I used for the dynamic case weight factored up by 2 for the dynamic effects,  and by another factor of 2 for the uneven ground effects.  Those factors could be higher,  but even when only set to 2's,  the weight gets factored up by 4.

The results quite clearly show that the Mars pre-takeoff static case is the worst of the 9 cases,  and by far.  This is because of the large fully refilled mass,  despite the lower gravity on Mars.  The Earth abort scenario transient touchdown is the second-worst case,  and the lunar landing transient touchdown is by far the least demanding case.

What one does in this spreadsheet is input the data,  then look through the 3 sized pad area cases for the Earth abort scenario,  pick the largest,  and re-input that pad area for sizing the pad dimensions and the stability ratio criterion.  Then one does the same for the lunar scenario,  and again for the Mars scenario.  The largest pad area of the 3 scenarios governs,  for any design considered to be capable of use in all 3 scenarios (Earth abort,  lunar landing,  and Mars landing).

What I did next was use the worst-case sized-pad scenario for Mars takeoff,  and run a stress analysis on the concept leg design.  I did this pencil-and-paper,  totally by-hand,  with a calculator.  It took 3 pages to do,  reproduced here as photos of those pages,  Figures 6,  7,  and 8.  These force and moment analysis numbers converge to the nearest 0.001 MN or MN-m.  This is not software,  this is just a well-defined procedure that you run,  getting numbers with equations,  which I have done for almost half a century now.  Before there were calculators,  I used a slide rule for this.  Done correctly,  it gets very good answers,  regardless of the calculation tool.

Figure 6 starts with a sketch of the leg design and the definitions of the variables in it.  Note that the initial attach point at mid leg span proved incorrect:  I reduced it twice before I got a retracted cylinder length greater than the cylinder stroke.  The second calculation determines the cylinder force angle relative to the leg,  from geometry.  This got revised after I finally found the feasible cylinder attach location on the leg.  The third calculation is a freebody diagram and analysis to find the fold-out pad hinge force and hinge moment.  I did not look at the details of the fold-out mechanism.

Figure 7 shows the freebody diagram and associated analysis of the leg,  with the pad forces applied,  and the cylinder and vehicle base hinge forces to be found.  It is standard freebody sums of forces and moments,  but includes a determination of tensile and compressive forces in the two regions of the leg.  At the bottom of the page,  I took a look at cylinder pressure and piston size,  as a function of the hydraulic pressure.  I did this in US units,  but converted the results to metric.   For this straightforward concept,  the cylinder sized alarmingly large,  and at alarmingly-high hydraulic pressure.

Figure 8 shows the leg bending analysis,  as the sequence of a load diagram,  a shear diagram,  and a bending moment diagram.  Unsurprisingly,  the max bending moment to be resisted occurs at the cylinder attach point on the leg,  and is more than a factor of 3 higher than the required hinge moment holding the fold-out pad level on the ground.  Units shown are metric.

At the bottom of Figure 8,  I added a calculation of the required leg section modulus to resist the max bending moment without yielding the leg material.  If the leg yields,  it will not retract fully,  which guarantees a fatal catastrophic failure of the heat shield at the next entry!   Being more familiar with US units,  I converted a typical US units yield stress to metric,  and then calculated the corresponding section modulus in cubic meters,  then converted that back to US units of cubic inches.  Either way,  it is a very large number,  something inconsistent with the largest leg cross section dimension being lateral,  not vertical,  when deployed.

Between this section modulus result and the high hydraulic pressure result,  it is very clear that the simplest,  most straightforward update of the Falcon-9 folding leg design to Starship is NOT the right way to do this!  We need a better retractable leg design concept,  one that couples the actuator system much nearer the tip of the leg.  That will require some sort of compound link system to accomplish.  Not being a landing gear designer,  I am not the person to come up with that rig.  I would appreciate input from real landing gear designers about this,  by comment or by email!

Overall,  I would venture to say that any design that achieves both the reduced soil bearing pressures,  and the wide stance necessary for rough field stability,  is going to cost some extra inert weight,  but,  you will get what you pay for!  The "trick" will be designing the compound linkages that let us reduce leg bending moment closer to the level of the pad hinge moment.  Another "trick" will be finding some alternate way to fold out the large pad areas that we will have to have,  and then restrain them level to the ground,  but with a lower hinge moment. 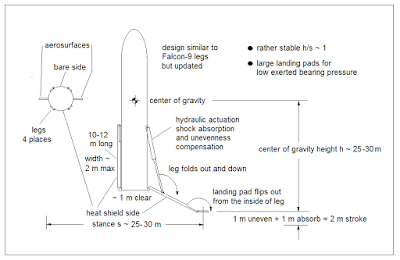 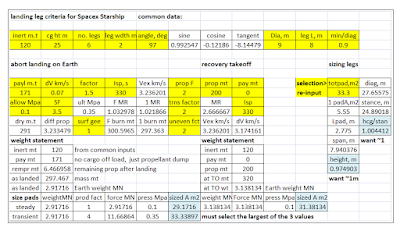 Figure 5 -- Spreadsheet Images for the Notes and Variable Definitions 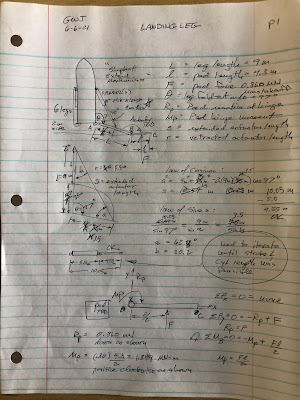 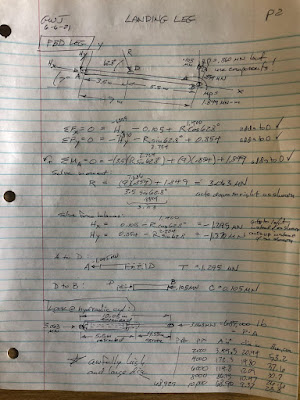 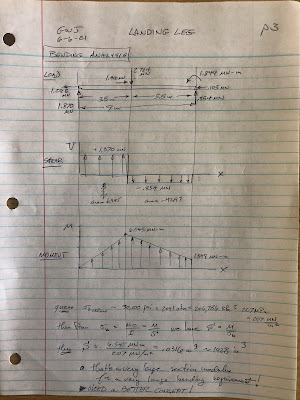