The figure indicates what is happening for a coasting body at higher hypersonic speeds.  If propelled,  the propulsion stream replaces some or all of the recirculating wake zone.  For purposes here,  “high hypersonic” is roughly Mach 8 or more. 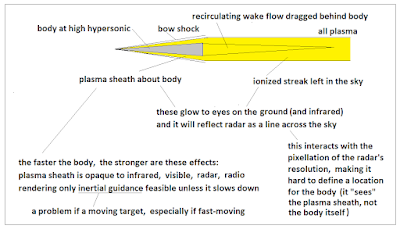 The bow shock is close to the body surface (that is the definition of “hypersonic”).  Between it and the body there is shocked air,  and there is a sort of boundary layer sheath affected by friction,  that wets the body.  Because of friction dissipation effects,  this boundary layer is hot enough to show some ionization,  even at lower hypersonic speeds (about Mach 6 or 7).  The shocked air just outside it will eventually also show ionization,  but only at much higher speeds.

The faster the speed,  the more ionization there is.  The more ionization there is,  the brighter the plasma sheath glows,  and eventually also the shocked air.  The brighter the plasma glows,  the more opaque the plasma sheath is to radio,  radar,  infrared,  and visible light.  That greatly affects what on-board guidance approaches will be feasible,  as well as communications to and from the body,  and also the visibility of the body and its flow field to sensors on the ground.

Inertial guidance of high quality can take your hypersonic missile to a fixed target quite accurately,  as long as the flight time does not exceed about a quarter hour.  But hitting a moving target will be a severe problem,  especially if it is fast-moving.  The missile would have to slow down enough to dissipate the plasma sheath,  in order to use radar,  optical,  or infrared guidance to find its target.  The same would be true for radio command guidance,  from the launch (or some other) site.

Radar on the ground will not see the body itself,  but it will see the plasma sheath and the wake flows,  as these are electrically conductive,  rather like a metal.  Because they glow from incandescence,  they emit light and heat (infrared).  This shows up as a glowing streak across the sky,  of some length corresponding to how quickly mixing and energy emission cool the plasma back to non-incandescence.  The glowing streak persists for minutes at entry altitudes,  only seconds much lower down. At Mach 6 to 7,  with only about 1 second persistence,  the glowing streak is still about 2 km long!

Radar is not like human vision:  it sees only the relative brightness among discrete pixels that represent its field of view,  with a timed range that is accurate regardless.  If the radar system is capable of being programmed to track the leading tip of the moving bright streak across the sky,  then effectively it is tracking the body.   If not,  then it cannot accurately track the body.  A similar thing applies to reticle-type infrared tracking.   Visible or infrared imaging will see the leading tip of the streak more-or-less the same way the human eye does:  quite effectively.

The plasma sheath is turbulent,  and moving at rather high speeds relative to the body surface.  Between that relative motion and that turbulence,  plus the obscuration of the body itself,  a doppler radar will inherently obtain the wrong speed for the body,  if it can sort anything at all out of a very confused signal.  So if the target tracking is based on a doppler-derived velocity,  it will sooner or later lose track,  by grossly mis-predicting the next location.

But with the right signal processing algorithms in the radar system,  looking at the motion of the leading tip of the streak instead of doppler,  the glowing plasma sheath is NOT a “cloak of invisibility”,  as is often claimed!

To imaging systems (optical or infrared) that “see” the way the eye does,  there is no “invisibility” at all,  quite the opposite,  actually!

Email ThisBlogThis!Share to TwitterShare to FacebookShare to Pinterest
Labels: aerothermo