Update 1-31-17:  The chaos continues and continually gets more intense.  This man Trump will do in one form or another what he said he would do during the campaign.  He will do it exactly the way he said he would:  bypassing Congress to make law by executive order.  I cannot yet tell how the clash between Trump-wannabe-king and the actual powers of the presidency will be resolved.  But resolved it must be,  or we will descend into tyranny.

Mr. Bannon (Trump's closest advisor) now characterizes "the media" instead of the Democrats as the opposition party!  Talk about your Orwellian NewSpeak!  And he has just been made part of the National Security Council,  where politics has no place.  The man is an obvious neo-Nazi,  if you look at the Breibart "News" (fake news) organization that he ran.  Maybe still does,  surreptitiously.

This extremist immigration ban sparking all the protest flies in the face of facts:  we already had extreme vetting in place.  But this president does not like facts,  because they conflict with his opinions and beliefs (and look at who has been feeding him his "facts":  Bannon/Breitbart).  So this immigration ban is the most egregiously xenophobic thing we have done since the internment of the Japanese-Americans during World War 2.  And it is giving the Islamic terrorist groups recruiting aid by giving them something to hold against us.  This is aid to the enemy we fight,  whether intentional or not.

We'll soon see whether a tea party-dominated Republican party can still do its duty for the people.  They control the House and Senate where such proceedings must take place. I just hope there is enough buyer's remorse among the millions of Trump supporters to force their representation to act.  Act before the tea party-dominated Republican party finishes morphing into a right-wing-extremist xenophobic clone of the Fascists,  Bolsheviks,  and Nazis who caused such trouble during the last century.  Our freedom is at risk.

Update 1-20-17:  Mr. Trump is now the president.  He has already sown a little chaos with his Republican party colleagues in his inauguration speech,  by promising things in his speech that they really don't want to give.  Good for him.  That gives me some hope,  at least.

That's a good thing,  since I think a party in control of both the Senate and the House that has been hijacked by the tea party extremists (and it has been for several years now) is the more dangerous threat to our country than Mr. Trump himself,  as fact-challenged and unaware-of-his-duties-and-powers as he is.

In any event,  I wish him well as president (I always wish that for all our presidents!!!),  and I hope he continues to hold his own party accountable in addition to the minority opposition,  just as he effectively promised in his speech.

As for the minority Democrat opposition,  turnabout is now fair play.  I encourage them to raise hell and oppose everything the tea party wants to do,  which so far bodes some real improprieties,  such as their attempt to gut the House ethics committee their first day on the job this term.

But when something sane shows up,  I encourage Democrats to work with the other side.  Continue trying to do what was said during the campaign:  "when they go low,  you go high".  And communicate what you are doing to the public.

Shed some very harsh light on attempted tea party improprieties (they will repeatedly try to do bad stuff).  That has been their history all along,  since the party takeover.

Since the election,  a lot of folks seem to be looking at this article.  It was written early in the campaign,  during the primaries,  actually.  It illustrates something about the character of the man,  confirmed by his own words and actions in public many times since.

As for the election,  look at my 8-4-16 "Evaluation of Choices for 2016" article.  Prior to the election,  I evaluated both major party candidates by means of a little trade study matrix.  I found two important conclusions:  (1) both are quite thoroughly distasteful candidates (as is well known by all),  and (2) I thought Clinton was slightly the lesser of two great evils because she would bring less chaos with her.

Clinton was the only Democrat that Trump could possibly beat.  Trump was the only Republican that Clinton could beat,  notwithstanding that Trump is a RINO,  not a real Republican.  Having a bad choice like that was no accident.  This bread-and-circuses charade was meant to distract us from what the rich elites have been doing:  destroying the middle class for profit.  This is borne out by the hacked emails confirming that the Democrat primary was rigged against Bernie Sanders.  We have no evidence yet that the GOP primary was rigged for Trump,  but I believe that evidence will eventually surface.

Both of these candidates are actually rich elites who would maintain the giant-corporate welfare state that is destroying us.  We were not meant to see that,  we were meant to be distracted by the bread-and-circuses.  But I see it,  and I have told all of you who read these postings.

Since the election,  these conclusions of mine about Trump have been borne out,  and I do not forsee that changing after the inaugural.  The electorate chose Trump by an extremely narrow margin in key electoral-vote states,  an outcome at odds with the popular vote.  But I don't see that outcome changing,  recounts and faithless electors notwithstanding (if it did,  that would result in even more chaos,  something we really don't need).

I predict:  (1) the racists have been emboldened and will spill out into mainstream life and cause serious trouble,  unfettered by Trump from his bully pulpit,  (2) Trump will renege on his promise to help the angry left-behinds who elected him,  as foretold by the selection for many of his government posts of the same sort of rich elites that have caused the problem,  (3) the chaos will continue into his first term because he knows nothing about being president,  only about being "king",  and that is not what the presidency is about,  (4) he will face early tests from one,  some,  or all,  of these:  Putin/Syria,  Putin/Ukraine,  ISIS,  Kim Jong Un,  and the Iranian mullahs,  and (5) he will fail that test or tests,  because he is an insecure,  compulsive counterpuncher,  who is vulnerable to being manipulated by that mechanism.

The chaos I predicted in item (3) just above is already definitely here.  Trump has no clue about accountability,  never having been accountable to anyone but himself,  and having been bailed out by the banks he was supposed to be accountable to,  as the more lucrative choice for them (6 bankruptcies as a matter of public record,  in which he stiffed his creditors to enrich himself).

He is unable to comprehend the concept of an absolute truth,  in sense that demonstrable fact may be at odds with what he wants to believe.  That explains why he is a science denier,  in several documented topic areas so far.  Which denial shows in some of his cabinet selections,  most notably Education and EPA.  It also explains why he dismisses the entire intelligence community's conclusion that the Russians hacked US domestic email sources,  to influence voters in this last election.

Trump demonstrably has no self control,  which is in part traceable to never having been accountable to anyone but himself.  This is the source of the destabilizing tweets,  over which the media obsess so much (too much,  actually,  you'd think that by now they'd know that nearly 100% of what he says is somewhere between "factually challenged" and an "out-and-out lie").

The latest tweet threatens to restart the nuclear arms race,  and for no reason available or apparent to the public,  or anybody else.  I wish we had a public figure capable of calling him to task for this unrestrained behavior.  It would take a superhero to do this,  though. 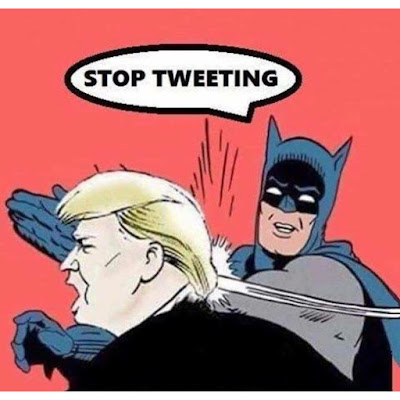 I have never liked his propaganda queen Kellyanne Conway,  precisely because she reminds me so much of Joseph Goebbels,  which actually classes her in a category I despise VERY intensely.  Yet,  at some level,  I still feel sorry for her,  for having to "explain" his idiocies,  which are fundamentally unexplainable.  In some ways,  even at age 70,  Trump is nothing but a very spoiled child,  behaving as if he were still of single-digit age. 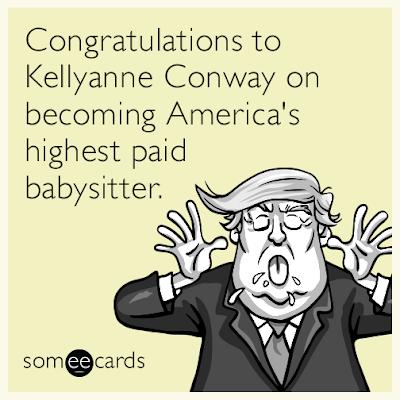 Well,  it looks like I may get my wish that was expressed below. Tammy Duckworth will be an incoming US senator.  Sooner or later,  she and Trump or his admin figures will cross swords over something stupid.  --  GW

This from our local paper about Donald Trump:
In a 1997 interview with radio disc jockey Howard Stern, Trump, who used student deferments and a “heel spur” medical deferment to get out of military service during the Vietnam War, said the danger he faced from getting sexually transmitted diseases when he was sleeping around in the United States was his own “personal Vietnam.”
“I’ve been so lucky in terms of that whole world. It is a dangerous world out there. It’s scary like Vietnam. Sort of like the Vietnam era,” he said. “It is my personal Vietnam. I feel like a great and very brave soldier.”

I'd like to see what US Rep. Tammy Duckworth would say to Trump about this egregious statement he made.  She very effectively took another congressman down,  right there on the floor of the House,  for saying something similarly stupid.

For those who do not know,  Tammy Duckworth was a 1991 Gulf War vet who lost both legs in the explosion,  when the helicopter she was flying was shot down with a rocket-propelled grenade.

Although my own service time was short and I never went to Southeast Asia,  I did join up during Vietnam.  Even with my limited service,  I find Trump’s comments EXTREMELY OFFENSIVE.  Offensive and egregiously stupid.  That man has no business commanding anything,  much less US military personnel.

My recommendation:  DO NOT ELECT TRUMP TO ANY OFFICE WHATSOEVER.

Update 6-12-16:  What this shows is a longstanding pattern with Trump.  19 years,  at least.  He will not change.  He is clearly unsuited to be commander-in-chief.

Update 7-27-16:  Today Trump publicly appealed to (state-supported) Russian hackers to uncover the missing Clinton state department emails.  Considering the bad state of affairs between the US and Russia,  due largely to Putin's ambitions for a new Russian empire,  this is borderline treason on Trump's part.

"Aid and comfort to the enemy" with 6+ witnesses,  per the definition.  Putin wants Trump to win and hates Clinton.  He is trying to sway our election for his own purposes by releasing hacked Clinton files.  I really do not like that.  And I really hate the prospect of a president the Russians can influence so easily to their own ends.

There are some related articles elsewhere on this site,  one of which seems to be modestly popular with readers (the 7-29-16 article).  Another one is just a funny (the 4-24-16 article).  All share the search keyword “idiocy in politics”.  Here’s the list: