Update 2-16-18:  The latest school shooting incident in Parkland,  Florida,  exemplifies exactly the two big-ticket things this article demonstrates:  (1) we have a leak in the background check process that allows crazy people to get guns legally,  and (2) we are utterly failing to defend adequately our gun-free zones.  If you wish the lost kids' lives to have any lasting meaning,  then do something about those two problems!

Update 7-9-16:  It is too early to have the facts about the mass shooting of police officers in Dallas.  My hunch is that extremized politics-of-race and more-than-a-little-craziness both played roles.  We'll see,  soon enough.  When we do know,  I'll add it to the database.

Meanwhile,  my article stands,  just as it is,  just below.  I do not see sanity in spending the effort and resources doing things that demonstrably produce little or no benefit.  I prefer to consult the actual data for suggestions as to what might produce large beneficial effects.

Update 7-5-17:  The recent attempt at a mass shooting of Republican congressmen at a baseball practice proves EXACTLY my point made in this article about defending the gun-free zones that you declare.  There are perfectly good reasons to have such gun-free zones,  but they are sitting-duck targets if left undefended!  In this case,  there were two armed and qualified peace officers right on the site.  The only death was the gunman.  QED.

Every time there is a mass shooting incident,  there are calls for stricter gun control,  and disappointment when nothing effective is done.  Few agree on exactly what to do.

This time is no different:  the Senate just voted down 4 proposed gun control bills offered only days after the Orlando bar incident.  As well they should,  nothing effective or fair could possibly be worked out that quickly.  Better no change than the wrong one,  because they are so hard to undo.

If one gets control of one’s emotions and takes a very hard look at the data,  one can easily see that most gun control proposals beyond what we already have in place would be quite ineffective.  In point of fact,  places where access to firearms is very restricted actually have higher rates of violent crime.  That is because the “bad guys”,  who scoff at laws restricting access to weapons,  enjoy a plethora of sitting-duck targets in those venues.  So,  too,  do the terrorists in Europe.

I found an excellent database of US mass shooting incidents available from motherjones.com as a downloadable spreadsheet,  which goes back 3 decades.  It is too large to republish here,  so I abstracted from it the bare essentials of all incidents with a 10 or more death toll,  plus two other incidents that didn’t have that high a death toll,  but are nonetheless infamous.

I added to my short list whether or not religious or political extremism played a role.  I specifically included whether the shooter was known to have mental problems,  although sometimes this took looking through the detailed notes to determine this.  The motherjones data included whether the weapons were obtained legally or not. 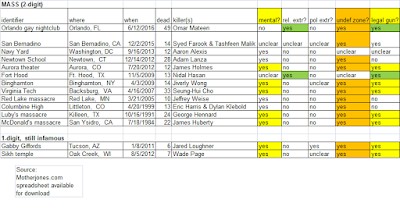 If you follow the highlight colors,  the proper responses jump right off the page at you.   They have little to do with most gun control proposals.  Truth may be painful,  but it sets you free.

We have a serious mental issues leak in our background check system,   as the yellow highlights indicate so very clearly.  People known beforehand to have mental problems are getting guns legally.  This is because the background check is a go/no-go gate based a court judgment of insanity.

None of these shooters met that standard.  Fix that,  and half the incidents in the table go away.  That’s worth the effort to address.

How about a tiered response,  where unease on the part of the seller triggers a real investigation by a real law enforcement person,  and not just a paper records search for a court judgment?  Columbine,  and Red Lake,   might have been prevented by that.  Probably not Newtown,  where the shooter killed his own mother to get her guns for his spree.

Religious and political extremism is starting to come to America.  That’s the two green highlights in the table.  This is what Senator Cornyn’s FBI watch list proposal (that was voted down) was intended to address.  This isn’t a big problem yet,  but if Europe is a guide,  it will be,  soon.

The orange highlighting shows the dominant problem,  the one nobody wants to face.  That is the inadequately-defended gun free zone,  the sitting-duck target.  This is the common element in nearly every single incident,  regardless of whether caused by mental issues or extremism.   The two exceptions not highlighted are government facilities,  but it was unclear to me whether those areas were actually open to the public.

My point is that if these victims hadn’t been sitting ducks,  they probably would be alive today.  The lesson is quite clear:  gun free zones (and there are good reasons to have them) must be defended.

The Most Important Recommendations

What constitutes an adequately and properly defended gun free zone has been known since the 19th century American frontier towns.  There are only two requirements:  (1) you need a properly trained peace officer as your guard,  and (2) he must be able to respond within about 60 seconds.

About requirement (2):  this was demonstrated in frontier towns that went gun-free,  for over 50 years.  Those were small towns geographically:  a deputy at a dog trot could reach anywhere in town in 60 seconds or less.  When the towns grew,  longer response proved inadequate:  more died.

What that means today is twofold:  (1) you need one or more guards qualified as peace officers on your gun-free zone site,  and (2) these guards must be able to reach anywhere in the site within 60 seconds.  I doubt we need any federal laws about how exactly to do this,  that should be determined locally,  since every region is different.  But those two broad requirements could usefully be federal.

Popular knee-jerk things like clip size limits and “assault” weapon bans won’t do any significant good.  A tiered response to mental issues,  and a proper defense of gun-free zones would obviously do a lot of good right now.  Using the FBI watch list to slow-up gun acquisition by the amateur class of religious or political extremists might soon be something that could help,  although real terrorists will get them illegally,  just like real criminals.

But if you defend your gun-free zones,  the terrorists will have to look for other targets!  That's the big effect here.

I didn’t include weapon types in my abstracted data.  Most of these were semi-automatic weapons,  some of those the so-called “assault” weapons like the AR-15.  A few were not even semi-automatic.

Semi-automatic is a World War 2 technology (M-1 Garand and M-1 Carbine).  No modern soldier would live long in battle with an AR-15 instead of the fully-automatic look-alike M-16 (a real machine gun).

I offer these things which might actually help (dealing with the mental issues background check leak and the sitting-duck undefended gun free zones) as truly data-driven,  and therefore very probably worthwhile to do.

Most of the other knee-jerk proposals are demonstrably ineffective at best,  and we know this,  because we've already tried them.  Why waste the effort to do them again?

Spend your effort and your resources on something that might actually work,  to do otherwise is insanely stupid.