I found some NASA fact sheets (ref. 1 dated 2017 and ref. 2 dated 2018) and a Mission Planner's Guide (ref. 3,  dated 2014) for the SLS launch rocket,  which has both manned capsule and cargo versions. The most important finds among all this information were (1) a definition of the payload numbers,  and (2) a reliable depiction of payload versus its "C3 energy-beyond-Earth-escape".  This payload vs energy trend takes the place of estimating stage delta-vees and the associated gravity and drag losses,  which is quite convenient. The more energy-beyond-escape there is for a given payload,  the further the interplanetary destination may be.

There are basically three vehicle configurations in a design that will grow after it first flies.  All three configurations share the same core first stage with four RS-25 Shuttle-technology hydrogen-oxygen engines.  See Figure 1.

The Block 1 configuration corresponds to first flight,  and will carry the Orion capsule and its service module on a few test demonstration missions.  It uses a smaller ICPS hydrogen-oxygen second stage and two strap-on boosters that are 5-segment versions of the 4-segment Shuttle solid rocket boosters.  It can be flown either with Orion,  or with payload inside a 5 m diameter shroud 19.11 m long overall.

The Block 1B configuration keeps the core stage and the 5-segment boosters,  but replaces the ICPS second stage with the larger hydrogen-oxygen Exploration Upper Stage (EUS).  Accordingly,  it has higher payload capability.  It can lift either the Orion capsule and service module,  or a payload contained within either of two payload shrouds:  the 5 m diameter same as Block 1,  or an 8.4 m diameter shroud also 19.11 m long overall.

The final growth version is the Block 2 configuration,  which keeps the core stage and the EUS second stage,  but replaces the solid boosters with higher-performing liquid engine boosters still to be developed.  There was still some uncertainty about the payload performance of the Block 2 configuration at the time the mission planner's guide was published in 2014.  This shows up as a small range of possible values instead of a single curve.  However,  it's a smaller effect.  Like Block 1B,  it lifts either Orion plus its service module,  or a payload within a shroud. This shroud is 10 m diameter and 31.1 m long overall. 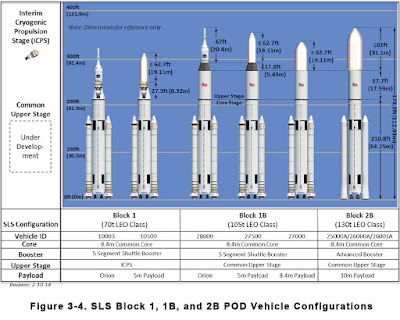 Figure 1 -- The Three Block Configurations of the SLS Launcher

The term "C3 energy-beyond-escape" sounds more mysterious than it really is.  Injection into an interplanetary (or cis-lunar) trajectory occurs very near the Earth. The coordinate system preferred for these comparisons is one affixed to the Earth.

The best and easiest way to figure velocity far from the Earth "Vinf" on the two escape trajectories is Vinf = (Veob^2 - Vesc^2)^0.5,  or in squared-velocity (energy) format Vinf^2 = Veob^2 - Vesc^2.  This C3 measure is nothing but Vinf^2!  For non-escape elliptic trajectories,  the C3 = Vinf^2 measure still has utility,  it is just negative,  since Vesc > Veob. Note that for negative C3 values,  the calculated Vinf is not a real number,  in accord with not ever getting far from the Earth.

The notion of Vinf = C3^0.5 has great utility planning interplanetary trajectories,  once one understands that Vinf is just the velocity with repect to Earth,  far from the Earth,  on that escape trajectory.  The Earth moves about the sun with an orbital velocity near 30 km/s.  If Vinf is tangent to the Earth's orbit in direction,  then the velocity of the vehicle with respect to the sun is Vinf + 30 km/s,  with Vinf positive if posigrade,  negative retrograde.  Off-angle,  the addition is vectorial.

In its Mission Planner's Guide,  NASA plots payload versus C3 value,  with destination-related C3 requirements shown as vertical lines.  There are 4 curves:  existing launchers as a region bounded by a maximum that is actually Delta-IV Heavy (which excludes new items like Falcon-Heavy),  Block 1 SLS,  Block 1-B SLS,  and a range of values from min to max that are possible for Block 2 SLS,  depending upon exactly what the final evolved liquid-propellant boosters will really be able to do. See Figure 2,  taken from that guide,  but see also below,  because the detailed specific definition of payload here is very important! 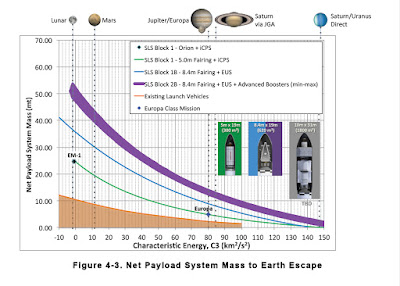 That guide gives no guidance for how heavy these adapter structures will actually be.  But,  those masses are not zero;  it takes significant structure to safely support the net payload against the gee forces and vibrations of launch.  I have no guidance for that effect here,  either,  except to say that you must reduce the payload allowances shown in Figure 2,  by whatever it might take to support the "net payload" you desire to launch. A realistic wild guess says reduce them by 10%.

Another thing to think about:  when the payload arrives at its destination,  it could fly by,  it could enter orbit,  or it could land directly.  Entering orbit or landing direct both require propulsion,  and may require heat protection,  if there is an atmosphere to enter. Those things have significant mass,  possibly very significant,  which must come directly out of your "net payload".

For example,  consider SLS Block 2 to Mars:  the min "net payload system" capability shown on Figure 2 is just about 39 metric tons. Knock that down by 10% for the necessary payload adapters to about 35.1 metric tons.  Any sort of one-way direct-entry lander that aerobrakes, followed by a retropropulsive landing (because of large size and ballistic coefficient) will have a payload fraction of no more than 50%.  That is largely based upon the specific impulse of long-term storable propellants,  per the design concept analysis methods of ref. 4.

That's 50% of your "net payload" mass of 35.1 tons as the actual useful delivered payload to the surface of Mars!  It means you can actually deliver only 17.5 useful payload tons to the surface of Mars,  not the min 39 tons in Figure 2! The rest is your lander structure and propellant,  plus your payload adapter. This is quite the significant effect!

These are not covered by the Mission Planner's Guide,  or by the 2017 or 2018 Fact Sheets from NASA.  However,  the latest publicly stated estimate from a NASA official regarding its Block 1 SLS launch cost is roughly $1 billion for  Block 1 launch.  Nobody yet knows what the real number is.

For the sake of having a good guess,  I assume manufacturing and labor-to-service costs are more-or-less proportional to launch weight (for a specific vehicle,  not in general), in turn closely related to first stage thrust.  The 2018 Fact sheet shows first stage max thrust capability for both Block 1 and Block 1B to be 8.8 million pounds,  and 11.9 million pounds for Block 2.

Applying the $1 billion estimate to Block 1 (and also Block 1-B),  and then scaling it by first stage thrust for Block 2,  we get about $1.35 billion for a Block 2 launch.  These are just guesses,  but they are as realistic as anybody else's guesses.

Now,  apply the 50% mass fraction that is realistic for a direct-entry one-way lander,  as described above.  Useful payloads delivered to the surface of Mars are then about 8.7 metric tons for Block 1,  13.5 tons for Block 1-B,  and 17.5-to-19.8 tons for Block 2.  One may always argue with my exact assumptions,  but these really are ballpark-correct figures.

Fair Comparisons to Other Vehicles

Some of these will have to have end-of-burn velocities estimated and Vinf and transfer orbit estimates made,  others will have published payloads to destinations of interest. In either case,  for any sort of rocket vehicle that carries payload within a shroud,  consideration of the same issues as here,  is required!  There will be some deduction from published "payload" figures to account for the necessary adapter,  and there has to be some sort of lander or other terminal maneuver vehicle to account for delivery to surface or to orbit. Again,  mass at entry is important to the entry trajectory hypersonics,  being part of ballistic coefficient.

This is simply required,  in order to make a fair comparison.  Default assumptions of 10% deduction for payload adapters,  and 50% payload fraction for a one-way direct-entry from-scratch Mars lander design seem reasonably realistic at present. Numbers for other vehicles are beyond scope here,  in this article.